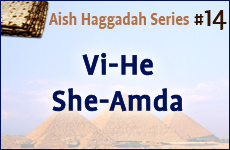 Have others really tried to destroy us in every generation?

In each and every generation they rise up against us to destroy us. And the Holy One, blessed be He, rescues us from their hands.

Have non-Jews really tried to destroy us in every generation?

How have we survived such an onslaught?

There is a dimension of Jewish thought known as gematria, or numerology. This approach attaches a numerical value to every letter in the Hebrew alphabet. In accordance with a strict set of rules, scholars are often able to reveal hidden meanings by uncovering ideas that are numerically encoded in various words and sentences.

The Haggadah says, "And this is what has sustained our forefathers and us..." The Hebrew word for "this" is v'hee, which is a four letter word consisting of a vav, the sixth letter of the alphabet, a hey, the fifth letter, a yud, the tenth letter, and an aleph, the first letter.

Perhaps these four letters are an allusion to the source of our national endurance.

Through it all, Jews have always seen themselves as having a profound relationship with the transcendental God who is One. A vibrant observance of the commandments, coupled with an unfailing dedication to studying the wisdom of the Torah, is both the expression of that relationship and the force which has propelled us through time.

If you remove these elements, what else is there to being Jewish?

(from the Passover Survival Kit Haggadah)

We have to deal with anti-Semitism because it's there in every generation. At this very moment, people are out there saying, "Let's get the Jews." This is not paranoia. It has been like this all through Jewish history. This was written thousands of years ago and it is telling us that that's the way it is going to be.

Usually, anti-Semites claim to have a reason. Pharaoh said the Jews were getting too much power. Haman had a personal vendetta against Mordechai. Hitler had political and economic excuses.

But there's a common denominator of all anti-Semites. The mission of the Jewish people is to elevate humanity by teaching about God and morality. Who therefore is an enemy of the Jews? Those who want to stop the teaching of morality.

And "God rescues us." Why? Because if the teaching of morality would cease, says the Talmud, the world would revert to a swirling mass of gas. God didn't create His universe so it could be Godless. So He must save His people.

"It is this that has stood by our fathers and by us..." This teaches that if it wasn't for God's promise to Abraham, the anti-Semites would surely have prevailed against us and we would not have survived until today. Even in our own lifetime, we see a succession of hatred far out of proportion to any logical reason or cause.

Yet it seems strange to ascribe our survival to "the covenant." For surely it is God Himself Who has stood by us. A treaty is only as good as those who keep it. Therefore, we should be thanking God, not His covenant!

The explanation is that this covenant has protected us not only from other nations, but even from God, so to speak. Even when we deserved to be destroyed, God kept His promise and would not allow His wrath to explode upon the Jews.

Further, God is the One that rescues us. The persecutions and hardship we endure are foretold. They are not random, chance tragedies, but have the meaning of some necessary purpose. Like a parent who chastises a child, or a teacher who grills a student. Why? Only to encourage the student to try harder.

God's promise assures us that whatever tragedy we endure, in the end we will not only come out better than before, but as well, our enemies will be brought to justice. This knowledge helps us to keep going in the face of many sufferings. Any suffering can be endured if it is certain to lead to an eventual good and worthwhile purpose.

It is this knowledge that "stands by us."

The Haggadah says: "And it is this that has stood by our ancestors and by us." But what is "this" referring to?

The obvious answer is that "the Covenant" has stood by us. Even when anti-Semitism may rage, there is never a danger of the Jewish people being wiped out, because God has made His eternal promise. While Hitler was busy annihilating European Jewry, Rommel was stationed in Egypt preparing to decimate the Jews in Israel. But a devastating sand storm rendered his armaments useless.

In each and every generation they rise up against us to destroy us. And The Holy One, blessed be He, rescues us from their hands.

Some people have a hard time with a God who is strong enough to liberate the Jewish people from Egypt ― but allows them to become slaves in the first place.

Consider: No victory is as sweet as that of the once-vanquished, no freedom as empowering as that of the captive, and no light as luminous as one born in darkness.

Think about it. When sworn enemies extend their hands in search of peace, are they not reaching for that noblest of human ideals contained in the Jewish message to humanity? The words of the prophet Isaiah: "They shall beat their swords into plowshares [and] neither shall they learn war anymore."

What would have happened to the human race if Abraham had not been a man of great sagacity and no specific Jewish people had come into being? Certainly the world without the Jews would have been a radically different place. Humanity might eventually have stumbled upon all the Jewish insights. But we cannot be sure. To the Jewish Bible we owe the idea of equality before the law, both divine and human; of the sanctity of life and the dignity of the human person; of the individual conscience and so of personal redemption; of the collective conscience and so of social responsibility; of peace as an abstract ideal and love as the foundation of justice, and many other items which constitute the basic moral furniture of the human mind. (Historian Paul Johnson)

That is the mandate of the Jewish people to be "a light unto the nations."

Therefore, it became necessary that one people be introduced into the ranks of the nations which, through its history and life, should declare that God is the only creative cause of existence. This mission required for its execution a nation poor in everything upon which the rest of mankind reared the edifice of its greatness and power; externally subordinate to the nations who were armed with proud self-sufficiency but fortified inwardly by direct reliance upon God, so that, by the suppression of every enemy force, God might reveal Himself directly as the sole Creator, Judge and Master of Jewish history.

The historical tapestry that is the odyssey of individuals, ideologies, and civilizations has but one constant. The Jew. Somehow, in some inexplicable way, a tiny and undeservedly maligned people has succeeded ― like historical yeast ― in becoming a primary civilizing agent for mankind. Those nations, those self-appointed chieftains of history who would have eliminated the Jew, have unknowingly become disciples of the very object of their ire.

The great span of our historical lifetime, like our birth in Egypt, is testimony to the fact that there exists no human or historical force capable of overriding that which guarantees the impossible – Jewish survival.

The Haggadah is a portal to Jewish existential history. It wants us to ponder this question: Was it worth it? Is it worth the risk of being a Jew?

On Passover, when your children ask, you'd better have an answer!

(from the Passover Survival Kit Haggadah)

The Meaning of Chad Gadya

Breaking the Middle Matzah
Scientific Curiosity and the Divine Encounter
Mind Over Milkshakes
Love the Convert
Comments
MOST POPULAR IN Passover
Our privacy policy
Aish.com Is Looking for Great Writers