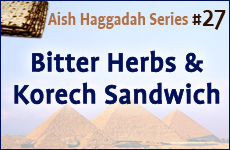 The why's and how's of eating bitter herbs on Seder night.

Take an amount of Marror equivalent to the size of a kezayit. Even though many have the custom of using horseradish, the Talmud nevertheless includes Chasa – Romaine lettuce – as one vegetable which may be used as Marror.

If Romaine lettuce is used, the leaves should total eight-by-ten inches, or about 25-29 cc. Extreme care should be taken to check the lettuce since frequently there are small bugs in the leaves.

If horseradish is used, it should be compacted into 1.1 fluid ounce – an amount equivalent to one half of a typical egg.

Horseradish in jars bought from the stores should not be used, since sweeteners are added to make them less bitter. Particularly problematic is "red horseradish" which is actually a mixture of beets and horseradish.

If you use pure horseradish, it should be ground up before Yom Tov begins.

Before making the blessing, the Marror should be dipped into the Charoset, and then shaken off. The Talmud says a bit of Charoset serves as an "antiseptic" to dilute the harsh effects of the Marror. When reciting the blessing, have in mind that the Marror will be eaten in the "Korech sandwich" as well.

You should not lean while eating the Marror.

It must be consumed within two to four minutes of the first swallow.

At one end of the spectrum of created beings there are purely spiritual entities. These are the angels. The other end is populated by purely physical beings – e.g. cows. The question is: where on this continuum do us humans fit in? "Well," you might think to yourself, "some people I know come close to the angelic end, while others seem to belong to the end where grazing is the dominant activity of the day."

The Jewish concept is that human beings, creatures that we are, are a blend of both ends of the spectrum. That is, each and every one of us is part angel and part Holstein. Part spiritual and part physical.

Take a look for yourself. Isn't there something within you – an angelic core – that inclines toward the spiritual? Toward that which transcends the mundanity of the corporeal? A portion of your being which yearns to dispense with its preoccupation with food, sleep, and comfort. To free itself to pursue the eternal and not the transitory. To experience that which is intensely meaningful and not fleeting or petty.

Now look again. Is there not a part of you that longs to spend endless sun-massaged days on a quiet beach? Chilled beverages at your side, CDs playing your favorite music, the Sunday paper... and drift away... from all your cares, worries and responsibilities.

This is us. A not-always-so-harmonious blend of spiritual and physical. One moment selflessly seeking to better the lot of all mankind, the next in a huff over the pizza delivered without extra cheese. One day inspired to find private time to meditate or nurture our spousal intimacy – yet waking up at week's end buried by a heap of files labeled wealth, success, and acclaim.

This is all of us. It is the conundrum of our existence and the dynamic to which the matzah and Marror allude.

Matzah is the soul. When pared of those external trappings and physical interests, you find that something yet remains of the human being. The longing of the soul. The basic nucleus of self.

Likewise a loaf of bread. When denied all its additives – of sugar and salt, of poppy seeds or raisins, and even of time to rise, an essence still remains. Stripped-down bread is matzah – and a stripped-down human being is a soul.

For an entire week, we eat only matzah and consider only our deepest aspirations and loftiest dreams. Like an unwieldy corporate monster which has become diversified beyond recognition, we now attempt to get back to the basics. To focus not only on priorities, but on the basic values and goals which define our priorities. Ultimately, to reconnect with that inner force which once promised to animate our every move.

Marror is our physicality run amok. To demean the body and shun the world of physical pleasures is never the way of Judaism. Rather, Judaism asserts what all of us know. If you eat too much ice cream, you get sick. If you eat ice cream too fast, you won't taste it. And if you eat ice cream everyday, eventually you will lose your taste for ice cream.

The alternative, the Jewish path to both ice cream and spirituality, is to master our desires for the delicious. The bitter herbs are not a call to ascetic denial, but rather a reminder of one of life's earliest learned truths – that for a cow, a life guided by moment-to-moment physical needs is fine, but for humans, that way can get a little bitter. Remember this lesson and you are halfway home to becoming an authentic connoisseur – of life.

Korech – sandwiching the matzah and Marror – is the most precise picture of who we are. We are neither the unencumbered soul of the Brahman, nor the untamed body of a gluttonous boor. Rather, as two hydrogen atoms adhere to one of oxygen and form a new entity called water, so too a soul when fused with a body becomes the crowning element of creation. A striving, struggling, growing, free-willed, creative human being.

Why is eating the bitter herbs one of the 15 steps to freedom?

At the Seder we say: "In every generation they rise against us to annihilate us." The Egyptians broke our backs and our spirits. The Romans destroyed the Second Temple and rivers of Jewish blood flowed. And so it was in every generation: Crusades, Inquisitions, Pogroms, Holocaust, Arab terrorism. Intense and irrational hatred has stalked our people to every corner of the globe.

Hitler said: "The Jews have inflicted two wounds on mankind – circumcision on the body, and conscience on the soul." How right he was and how much more work we have to do.

Throughout the generations, the forces of darkness have sought to extinguish our flame. But the Jews have somehow prevailed. We have God's promise that we will be the eternal nation. For without our message, the world would revert to utter chaos.

At the Seder, we eat the bitter herbs – in combination with matzah – to underscore that God is present not only during our periods of freedom (symbolized by the matzah), but during our bitter periods of exile as well. He will never forsake us.

Two Sides of the Coin

This is in remembrance of the Temple, according to the custom of Hillel. At the time the Temple was standing, Hillel used to make a sandwich of matzah and Marror. This was to fulfill that which it says in the Torah: "They shall eat it with matzah and Marror." (Numbers 9:11)

Hillel innovated the world's first sandwich. This teaches us that the freedom of matzah and the struggle of Marror are actually two sides of the same coin. If you don't pick one, you get the other. God will give you freedom if you choose right, and if you choose wrong, He'll give you bitterness. They are both from the Almighty because He runs the whole show. They are interwoven and it all depends on your choice.

Why is the Korech sandwich one of the 15 steps to freedom?

The Hillel Sandwich is "bricks-and-mortar" – broken matzah held together by bitter herbs and Charoset. The matzah was once whole. So too, the Jewish people can become crushed and divisive. But we are held together by our common links to Torah and our shared historical experiences.

The Talmud says that as Jews in Egypt, we were redeemed only because of our unity. We were unified in our commitment to each other and to the future of our people. Weeks later at Mount Sinai, we stood together and accepted the Torah with one heart and one mind.

Today, we are fighting amongst ourselves under the watchful eye of the world media. It is both embarrassing and discouraging. The biggest threat to Jewish survival may be from within. Our only response is to stand loudly and proclaim: Every Jew is a Jew. Period. The inclusion of the "Wicked Son" in the Seder expresses our conviction that no Jew is ever irretrievably lost. We are all one family, responsible to love and care for one another.

The matzah may be broken, but it can be restored. It is this "Hillel Sandwich" which has traditionally symbolized our commitment to glue the Jewish nation back together. On the merit of unity we were redeemed from Egypt, and it is on that merit that we shall be redeemed once again.

What is on the Passover Seder Plate?

Dayenu! Many Plagues
Bechukotai 5782: Divine Retribution
Behar 5782: Working to Live or Living to Work?
The Wholeness of Being Broken
Comments
MOST POPULAR IN The Haggadah
Our privacy policy