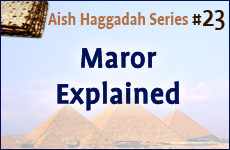 What is the reason we eat the bitter herbs?

What is the reason we eat Marror? Because the Egyptians embittered the lives of our ancestors in Egypt. As it says: "They made their lives bitter through the hard labor, with mortar and brick and all kinds of work in the field. All their labor was carried out under conditions of excessive force." (Exodus 1:14)

Shlepping mortar and bricks is back-breaking labor. But do you know what? Building up your ego is hard work, too. Think about all the hard work you do just to impress others!

The Torah has 613 commandments. People say that's too many! But consider that when you are living without God, you bear a billion burdens.

To be controlled by the body is Marror. It embitters your life with hard labor. Next time you see a menial laborer, realize that's what we do to ourselves when we aren't spiritual.

Slavery can destroy a person emotionally when it's meaningless labor. Imagine digging a hole and then filling it back right away. You lose your motivation to continue, because your efforts don't amount to anything in the end. The Germans used this tactic to drive the Jews crazy, to demean them as human beings.

When your life lacks spirituality and you are controlled by the body, then even after you get the career and status and salary and achievements, at some point you say to yourself, "OK, what did I really accomplish?" And then you have to look for the next toy and the next way to prove yourself. You are constantly feeling an emptiness and an undertow beneath it all saying "I'm finite. I'm meaningless." It's like spending your whole life rolling a big stone up the hill ― and it rolls right back down again. That's empty labor.

The biggest fear a human has is the fear of not getting anywhere. And if you're not out of the body, that's exactly where you are going.

What is the reason we eat this Marror? Because the Egyptians embittered the lives of our ancestors in Egypt. As it says: "They made their lives bitter through the hard labor, with mortar and brick and all kinds of work in the field. All their labor was carried out under conditions of excessive force." (Exodus 1:14)

Every life has its bitterness. We may get sick, lose our job, or suffer a broken relationship. What does it all mean? What is the purpose?

Judaism says that everything in life has meaning and purpose ― even the suffering. Sometimes we are able to see the reason, and sometimes we can't. Sometimes the reason is only revealed over time. Remember the guy, who ― after losing his job ― was forced to develop his creativity and ended up becoming a millionaire?

A few days later, the horse returned home with an entire stable-full of wild horses that it had befriended along the way. All the villagers came to congratulate him. "Oh, such good luck ― your horse ran away and now you've got a whole stable full!"

A few days later, the farmer's son was out riding one of the wild horses, and got thrown off ― breaking his leg. All the villagers came to console him. "Oy vey, your son broke his leg."

A few days later, the government sent representatives to the village with orders to draft every able-bodied young man into the army. All the sons were taken away, except for the farmer's son who had a broken leg.

The commentators ask: Of the three items in the Haggadah ― "Passover, Matzah and Marror" ― why is Marror listed last? Passover and matzah are symbols of our freedom ― while Marror, which represents slavery, should chronologically be listed first!

Marror is mentioned last because human nature is such that ― even though we intellectually may know that the bitterness is ultimately for the best, still we can't appreciate it while we're "in it" ― rather only when looking back!

Life is kind of like going to the dentist. One way of enduring the pain is to stay focused on the fact that it's ultimately for the best.

Who Is the Wicked Son?

Ten Plagues
It Takes A Lot Of Faith To Be An Atheist
How Instagram Brought Back This Nostalgic Soup
What Makes Eli Run?
Comments
MOST POPULAR IN Passover
Our privacy policy