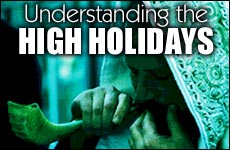 The overarching theme of Rosh Hashanah and Yom Kippur is "change:" to change from what we were before and to become new individuals.

Tishrei, the month of Rosh Hashana, is the first month of the universe, and just as when God completed His Creation He contemplated and evaluated it, so does He do every Rosh Hashana -- which means that Rosh Hashana is actually the Day of Judgment for the universe and for mankind collectively and individually.

That explains why, more than any other Jewish holiday, Rosh Hashana's liturgy is not limited to Jewish themes exclusively, but contains so many universal themes as well. On no other occasion, for example, is God referred to as "King over all the earth," and at no other time is God's Holy Temple called a "house of prayer for all the nations." This is all a reflection of the universal judgment of this day.

God evaluates us collectively, just as a shepherd looks over his flock with one glance. And individually, He also judges us like a shepherd who looks at each single sheep as it files through a narrow opening in the gate. So Rosh Hashana and Yom Kippur are more than just a Jewish version of New Year's Day. It's a time of great introspection, of teshuva/repentance, of stock-taking. According to an ancient Jewish tradition, it marks the creation of Adam and Eve -- who were created, who sinned, and who were judged all on the same day.

All of these traditions underscore the idea that Rosh Hashana is the time of beginnings. For example, the Talmud states that a number of other events took place on Rosh Hashana: Abraham and Jacob were born on Rosh Hashana; the three barren women -- Sarah, Rachel, and Hannah (the mother of the prophet Samuel) -- were all remembered by God on Rosh Hashana, when He decreed that they will give birth. On Rosh Hashana, Joseph was freed from the Egyptian prison and became viceroy of Egypt. And on Rosh Hashana, slavery ended for the Jews in Egypt and they waited for the ten plagues to be completed so that they could go out to freedom.

Thus, Rosh Hashana is a time for significant initiatives. As such, it is an opportunity for us to recreate ourselves, to return to a relationship with God, to strengthen our ties to our faith…

On the one hand, Rosh Hashana is an extremely solemn day, the most solemn of the year after Yom Kippur. Because Rosh Hashana begins the Ten Days of Repentance, we stand at the bar of judgment on those days. It's as if we were in a courtroom pleading for our very lives.

Our tradition gives us a vivid image: "The Books of the Living and the Books of the Dead are open before Him," which means many things -- but one of the things it means is that we pray that our names be inscribed by our loving and understanding God in the one book and not in the other.

Our tradition also tells us that beginning with Rosh Hashana, a Jew has the opportunity to return to God, to perform teshuva -- which literally means to turn around, to return, to start all over again. Rosh Hashana and its companion, Yom Kippur, are Divine gifts in which we are given the opportunity to reopen our relationship with God, when we have the chance to wipe away the past as if it did not exist, and to start over again with a clean slate.

The slate is not wiped clean automatically. The process has to begin with us, with a sense of true regret, with contrition for past misdeeds, and with a serious resolution not to repeat them. The opportunity is given to sincere returners, not to pro forma ones who are just going through the motions. But once the process is properly done, once the catharsis of Rosh Hashana and Yom Kippur make their impact on us, what could be more joyous than that? So, yes, it is solemnity filled with awe, and also filled with spiritual joy.

Remember that in the religious context joy is deeply inward, and is not necessarily manifested by laughter and smiles. As such, religious joy and religious awe are not contradictions. In fact, they go hand in hand. In the second Psalm, King David says, "Serve the Lord with fear, and rejoice with trembling."

The liturgy of Rosh Hashana, especially the additional "musaf" service, is the most magnificent prayer the world has ever seen. It's like a symphony, perfectly balanced, divided into three separate movements, devoted to the themes of:

Bear this in mind: the overarching theme of Rosh Hashana and Yom Kippur is "change:" to change from what we were before and to become new individuals. The motif behind it all is accountability. We are responsible for our actions. We do not live in a vacuum. What we do or say has an impact and a resonance in the world. Yom Kippur represents the potential for a human being to change and return: we are not eternally condemned to follow a certain habitual path; we do have the ability, if we so choose, to change our ways.

It is amazing: in the Talmud (Nedarim 39b), the Sages tell us that teshuva, repentance, was created before the world was created. That is to say, the idea of repentance, of a person changing himself and changing his course, is an integral part of Creation -- and the world could not exist without it.

An excerpt from "On Judaism," conversations on being Jewish in today's world. Published by Shaar Press, Inc. Distributed by ArtScroll/Mesorah Publications Ltd.

All About Tashlich on Rosh Hashanah
The Promise Of The Land
Which Chat Are You On?: Parshas Behar/Lag Ba’Omer
Do You Like Slow-Cooked Food? Thank the Jews
Comments