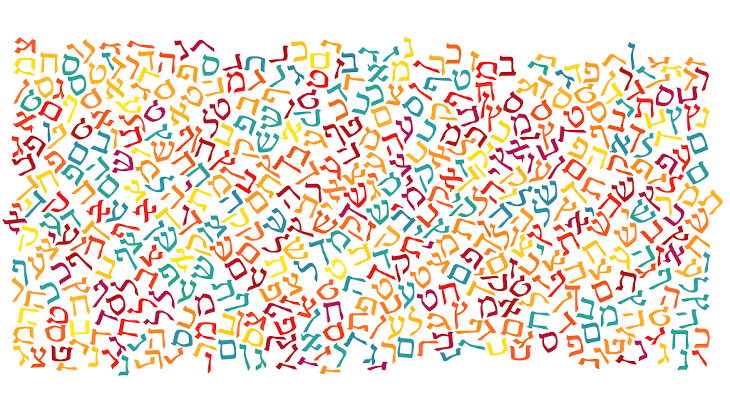 Why you should sign up to Aish Academy’s just-launched online Hebrew Ulpan course.

Every Jew can and should learn Hebrew. In honor the launch of Aish Academy’s new Hebrew Ulpan course, here are the top 5 reasons to learn Hebrew:

1. Hebrew is the building blocks of Creation.

Imagine a chemical compound of hydrogen and oxygen that produces water; a small change – adding a second another oxygen molecule – produces hydrogen peroxide. So too, in the metaphysical world: the 22 Hebrew letters are the building blocks of Creation. Betzalel's ability to construct the Mishkan (Tabernacle), the forerunner of the Temple, came through understanding how God combined Hebrew letters to create the world.

The Talmud says that Adam named the animals by identifying their essence. For example, the word chamor (donkey) is the same root as chomer (physicality) – because a donkey is notable for hauling physical loads.

As a description of the metaphysical reality, Hebrew is steeped in deeper meaning, whereas conventional languages are arbitrary, with no inherent meaning in the words or letters. For example, Man is named Adam because he was created from dust of the earth (adama), the source of potential growth. Compare this to the Hebrew word for animal, "beheima" which is a contraction of two Hebrew words, "bah" (in it) and "mah" (what) – meaning the essence of an animal is already in it; it will physically grow but it has already reached its spiritual potential.

2. Hebrew is the language of the Bible, Siddur, and Jewish study.

The Torah is written in Hebrew, and learning Hebrew opens access to thousands of years of historical and philosophical texts. Translations can never fully express the nuance of the original.

To fully participate in Jewish prayer, rituals and Torah study, there is no more authentic and satisfying way than in the original language. In fact, many of the schismatic religions that emerged from Judaism are riddled with mistaken translations of the original Hebrew.

3. Hebrew is key to Jewish identity.

Hebrew is a special, “holy” language, as we say in the holiday prayers: "v'romam'tanu m'kol ha'lishonot" – God elevated the Jewish people above other languages. Hebrew is the national language of the Jewish people spoken by Abraham, Moses, and King David. Furthermore, the prophet Zephaniah (3:9) predicts that in the future, Hebrew will become the primary global language.

Unlike English, which is read from left-to-right, Hebrew is read from right-to-left. Hebrew expresses a particular “mentality,” and sometimes Western concepts are backwards when viewed from a Torah perspective. That is why Deuteronomy 11:19 instructs us to teach Torah to our children and “speak to them.” Rashi explains that Hebrew is such a core element of Jewish identity that every child should be taught to speak Hebrew; otherwise it is in some respect “like burying the child.”

4. Hebrew is the language of Israel today.

This may represent the only time in history that an ancient language has been resurrected for modern use, symbolizing the eternal nature of the Jewish people.

Learning Hebrew opens a window into the culture and values of Israeli society. Far beyond hummus and falafel, there is no better way to connect to Israel than by learning its language.

5. Hebrew is at the root of America’s founding.

America's first institutions of higher learning, including Harvard and Princeton, made Bible study and Hebrew part of the required curriculum. The Yale seal depicts the Hebrew words "Urim V'Tumim," an item worn in the Holy Temple. The seals of both Columbia University and Dartmouth feature the Hebrew name of God. So popular was the Hebrew language in the 18th century that several students at Yale delivered their commencement orations in Hebrew.

America’s founding fathers were steeped in the study of Hebrew, quoting the Bible more than any other document. At one point, the founding fathers seriously considered designating Hebrew as America's official language.

Hebrew is at the heart of Jewish life, and unites Jews from all corners of the world. Give your Jewish identity and Torah literacy a boost by registering now for the Hebrew Ulpan at Aish Academy.

The Aish Academy Hebrew Ulpan course is taught by Rabbi Shlomo Eitan. Rabbi Eitan is an internationally recognized linguistics expert and has developed a proven method to teach Hebrew. Unlike other Hebrew language courses, Rabbi Eitan focuses on the structure of the language and through small incremental steps, you’ll master the fundamentals of Hebrew.