Theodore Bikel: A Jewish Man for All Seasons 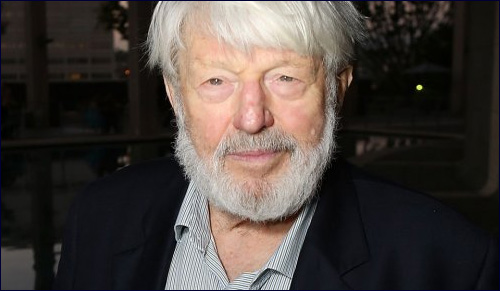 The Tony award winning actor famous for playing Tevye in Fiddler on the Roof dies at 91.

I had the pleasure of interviewing Theodore Bikel, who died on Tuesday July 21st, for my book: “Yiddishe Mamas: The Truth about the Jewish Mother.”

The first thing we talked about was dear to my heart; the song “Edelweiss” which he sang in the Broadway production of “The Sound of Music” as Baron von Trapp, the role he originated in 1959. The simple song reminded me of sitting at my zayde’s knee as he sang and played the balalaika. Mr. Bikel explained how Rogers and Hammerstein wrote the song specifically for him at the last minute during previews.

As we moved on, I found him to be no-nonsense, funny, and outspoken. The man known for his ability to play any man, anywhere, didn’t disappoint.

“I believe in the continuity of the Jewish existence.”

On his mother, Miriam Bikel: “I could do no wrong. According to her I was a genius!” Though she was supportive of his performing saying: “I sang before I could talk,” the truth is, her expectation of perfection was wrong ... we all do wrong. [My mother] was a mixture of lovable, but she devoted herself to being overly protective. When she was in an old age home and asked how I was, not a single time could I fall asleep again.”

Yet he deeply respected the Jewish mother who “also had to survive in hostile environments.” And indeed, the family not only survived, but throughout his diversified career, he was ardently Jewish, in his art, in his life.

Theodor Meir Bikel was born in Vienna on May 2, 1924, to Josef Bikel and the former Miriam Riegler. He was named for Theodor for Theodor Herzl, founder of Zionism, who, 64 years prior, was born on the same date.

In his early teens, after the Anschluss, Bikel (called Theo) saw Hitler parade into Vienna. The family quickly moved to British occupied Palestine, where Theo settled in Kibbutz Kfar Hamaccabi. It was here he knew he was destined to be an actor and apprenticed for three years at the Habimah theater in Tel Aviv in 1943. He also was a co-founder of the Israeli Chamber Theatre (the “Cameri”).

He moved on to the Royal Academy of Dramatic Art in London. Already a master of many languages, he was that rare performer who reveled in playing a diversity of roles. He also took an earnest interest in the guitar and folk music. His career was kick-started by Sir Laurence Olivier who offered him a role in his production of “A Streetcar Named Desire.”

In addition to originating the role of Baron von Trapp, Mr. Bikel is universally associated with Tevye in “Fiddler on the Roof.” While he didn’t create the role, he played it over 2,000 times from 1967 to 2010, more than any other performer.

His versatility is seen in his screen and television roles, which include, among others, “The Defiant Ones” (1958) (Academy Award nominee), “The African Queen” (1951), “My Fair Lady” (1964), “I Want to Live” (1958), “The Russians Are Coming, The Russians Are Coming” (1965), “Crisis in the Kremlin” (1992), “Benefit of the Doubt” (1992), and “Shadow Conspiracy” (1996). The master of languages (seven) and dialects, appeared in over 30 films and numerous television shows. His flexibility and range is virtually unparalleled from playing a sinister Chinese crook, to a Czech officer, a Hindu doctor, a Jewish refugee, a Hungarian linguist, a blind Portuguese cobbler, a South African Boer, and yes, a Greek peanut vender to name a few.

He claimed his favorite characters were Zorba the Greek and Tevye. Age never slowed him down. Not only was he the consummate Tevye, at age 84, he portrayed Tevye’s creator in his one-man show “Sholem Aleichem: Laughter Through Tears.”

Known equally for his folk music, he was a founder in 1961 of the Newport Folk Festival. He recorded over 20 albums, many with Jewish themes, singing in 21 languages, including, Yiddish, Hebrew, German, Russian, medieval Spanish, and even Zulu. From early works, such as “Israeli Folk Songs” (1955) to “A Taste of Passover” (1998) and “A Taste of Hanukkah” (2000), he continued to concertize virtually to the end of his life. On his 90th Birthday celebration, referring to “Theodore Bikel Sings More Jewish Folk Songs,” he quipped: “A friend said it should’ve been called ‘Theodore Bikel Sings More Jewish Folk Songs Than Anybody.’”

An outspoken activist for Jewish rights, he was at one time, Senior Vice President of the American Jewish Congress. In 1986, he was arrested while protesting the plight of Soviet Jews in front of the Soviet Embassy in Washington.

At the end of our interview, when talking about the future of Judaism, he said: “I believe in the continuity of the Jewish existence.”

More than virtually any other performer, he was passionate about the re-birth and continuation of Jewish culture. He succeeded. Rhino Records has released classic Bikel albums in iTunes. Said one executive: “His music was loved throughout the 20th century. We’re going to make sure people love it throughout the 21st century.”

The Jewish man for all seasons will become a Jewish cultural lion --for all time.

Mr. Bikel is survived by his wife, Aimee Ginsburg; sons Rob and Danny; stepsons Zeev and Noam; and three grandchildren.

James Bond: 5 Jewish Facts
It Takes A Lot Of Faith To Be An Atheist
How Instagram Brought Back This Nostalgic Soup
What Makes Eli Run?
Comments
MOST POPULAR IN Jewlarious
Our privacy policy