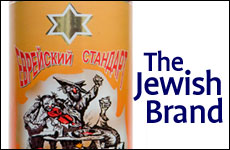 What do they know that we don't?

This past Thursday I flew back to Los Angeles from Moscow, Russia. At the Duty Free in Sheremoya Airport, I did something I haven’t done in many years: I bought a bottle of Duty Free Liquor. 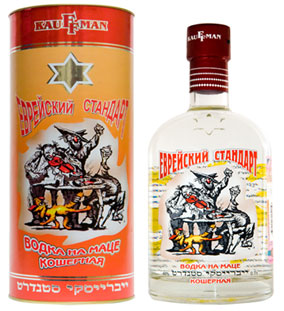 In Russia one of the premium brands of Vodka is called Kauffman's – my namesake. Although the name is spelled slightly differently, it was close enough and I bought the bottle for novelty purposes. They had a special price on the International version of the vodka, with its elegant decanter that is shaped a bit like an expressionist’s penguin. But on the Russian version, written in Cyrillic, there is something quite different about the packaging: it has a large Jewish star right at the top.

I was staying at the National Hotel – probably the grandest hotel in Moscow. At one point in history, it was the American embassy. It stands in its grandeur directly across the street from Red Square and the Kremlin. The night before my trip home was the first night of Chanukah. Outside my hotel window, directly in front of the Kremlin, stood a 40-foot menorah. For more than 80 years it was illegal to light a Chanukah menorah, and yet today the mayor of Moscow himself comes annually to celebrate the lighting of the Chanukah candles (the only religious ceremony that takes place in Red Square). We are living in unlikely times indeed.

I was in Moscow directing a commercial for Nescafe. And when I travel my status as a Jew is out there for everyone to see. I observe the Sabbath so the entire schedule revolves around my observance and personal needs. At times it's not at all convenient for the production. But thankfully, people accommodate my needs and they're usually happy to do it.

At the first meeting, my cinematographer pulled me aside. He is a young superstar. His fame is rising at such a pace that it seems likely that he will be one of the premier cinematographers in the world. He pulled me aside to tell me that he was proud to work with a Jewish director. He then said something amazing to me: “Everybody knows that you guys are smarter.” He also pointed out that his wife is Jewish. He wore the badge of her Jewish identity the way a typical American man might brag that his wife was once a super-model.

For many non-Jews, that Jewish star is a sign of elitism.

I remembered that odd moment when I was at the Duty Free Shop looking at this premier brand of vodka with the Jewish star on the bottle. Somehow I doubt that purveyors of this brand of Kauffman’s vodka are Jewish. We Jews would never be so bold as to put a Jewish star out there for all the world to see. But for many non-Jews, that Jewish star is a sign of elitism.

And it dawned on me that if an elite brand is about lifestyle and excellence and a success worth coveting, then Judaism is not just a nation and not just a religion; it's also a brand –probably the greatest brand in the history of mankind. After all, it has inspired the world toward monotheism and morality. It has led nations in politics and law, commerce and economics, science and medicine and even in the arts and entertainment. In every discipline of passion and labor, Jews have been among the leaders, the trailblazers and the success stories. Our success is beyond natural explanation. It is no wonder the non-Jewish world should recognize it as a great brand.

The only people who don't recognize the grandeur of our brand… is us. Our people. So many Jews are deeply reticent to acknowledge the depth and power of the Jewish brand. In fact, we run from it. We don’t want to be exceptions. We don’t want to have our identifying marks so readily available. We want to blend in. No blazing Jewish stars on our bottles, thank you.

From a branding perspective, that is counter-intuitive. Think about Louis Vitton – one of the greatest luxury brands in the world. Everything that it produces has the LV insignia everywhere like bad wallpaper. That is true of Prada and Gucci, and Bulgari and Cartier. But the Jewish brand? We fear those identifiers.

If our wardrobes were filled with the Jewish brand instead of Prada and Versace, what would our lives look like? With a 40-foot public menorah blazing in Red Square, maybe it is safe for us to come out of the closet.

Celebrity Quotes about Shabbat
Don’t Believe in Other Gods Versus God is One
Seeing Without Eyes
Why Shouldn’t We Eat Whatever We Want?
Comments
MOST POPULAR IN Israel
Our privacy policy
Aish.com Is Looking for Great Writers