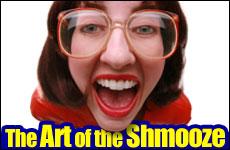 Improve your Shmooze IQ with my Shmooze Dos and Don’ts.

I’m a born shmoozer. I popped out of the womb, saying, “Finally! Nine months and all I had to play with was a cord?! But, enough kvetching. So everyone, when do we start with the solid food? Can we talk?!”

Trust me, Joan didn’t invent that phrase. My gelt’s on Sarah, who when she heard she was giving birth at 90, said to Abraham, “Listen mamala, can thee and me talketh?!” Thanks to Sarah and our linguacious DNA, we Jewish women have been talking and schmoozing ever since. Constantly. Everywhere. With anyone. About anything. From foreign leaders to complete strangers in Ladies Rooms, we’ll chat, share, bond, because we FMOTs (Female Members of the Tribe) are the quintessential schmoozers.

We FMOTs (Female Members of the Tribe) are the quintessential schmoozers.

Last week, for example, I stopped into a 7-Eleven and came back with 20 new Facebook friends. Through shmoozing at a restaurant, I’ve learned about the marital problems of the couple at the next table, set up a job interview for my cousin’s daughter, and yes, grilled Jewish prospects for my son, all in under 50 minutes. Once, delivering an uplifting, inspirational schmooze with a man on a hospital gurney, I found out he was on his way to the morgue. I thought the Body Baggie was to keep him from getting dusty. (OK, not my proudest moment).

For those who sniff at the idea of small talk as trivial drivel, or poo poo “petty” conversation, think again. Unless you’re Al Gore or Bob Geldof, who at a party or job interview, wants to hear you mouth off on human misery or toxic waste – especially when you’re in the produce department, squeezing for ripe melons … zzzzzzz?!

That’s not to say these subjects are taboo or unimportant. But ’tis far better to break a little bread, establish a basis first. Countries may have been founded on Big Principles, but negotiating to become one? Shmoozing. Did Golda Meir welcome world leaders hocking for gelt, fighter planes, or talking borders? Golda got more missiles and money with honey (in a glass tea), than by being a boring vilda chaya. Studies of graduates have proven that despite Ivy A grades, the winners in life are the schmoozers while the low-talkers and Big Talkers are the losers.

They know that a gifted schmoozer establishes:

Then, over rugelach, you can talk world peace, pestilence – and how making you a VP of paper goods will increase his sales 250%.

But as with all things, effective schmoozing is both a skill and an art. How do you improve your Schmooze IQ? Here is my list of four Schmooze Losers and Doers.

#1: The Macher: Finding a basis is a good thing. But, telling the Donald and Ivanka: “Bet you never sold a condo unit in Staten Island?! I’ll show you how to turn a 10% profit,” will not only get a “You’re Fired,” you’ll hear Ivanka whisper to her husband: “Shmendrick.” Ditto for interrupting to say your nephew also met Mayor Bloomberg, or reciting your position on cloning -- or your Bar Mitzvah speech.

#2: The Bester: A cousin to the Macher is The Bester, or Mega-Macher. You threw a Bar Mitzvah at the Hilton, he took 100 people on safari; you have a headache, she had a tumor. You wrote a soap opera, he catered Schindler’s List. Should you be such a person, you will, however, establish a basis among the other guests. They’ll all agree you’re a shmegegge.

#3: The Censor-Less: “I hear you’re divorcing.” “You think that’s the way to make a matzo ball?!” “Overeaters Anonymous, right?” Proceed directly to Schmooze Losers anonymous; a 12-Step program for those afflicted with Bigfoot-in-Pisk disease. The only time you should say, “This may be too personal, but … you don’t look so good” is when the schmoozee screams, clutches his heart, or keels over.

#4: The, “So … Tell me, Mr. Spielberg, from where do you get your ideas?” Asking “How did you get to be a millionaire?” or “So doctor, what’s this thing hanging off my chest?” are schmooze losers. Boring, annoying questions the schmoozee has answered 1,000 times makes us boring and annoying. And as for clichés? If anyone asked my favorite sign, I’d say “Exit.”

#1: Know a little something. You’re meeting the faculty at Yeshiva University with your son, Myron. While you don’t have to be a Mike Wallace, read, watch, surf, so when someone mentions Kabul, you won’t ask why your Basic Package only goes up to channel 41. Trust me, mamalas. One schmooze-schmendrick remark will have you sitting home flipping channels – with Myron.

#2: Question “Quintessentials:” A talented shmoozer a) observes; b) surprises! For example, you see an interesting prospect at a bookstore carrying Jonathan Safran Foer’s newest. Bagel her or play a little Jewish Geography. “You love him, too? Did you read his last? I met him at Princeton.” Such an opening not only establishes a basis, but let’s her know, that you, too, aren’t a lox. Do we not love people smart enough to notice what we wish to believe about ourselves? If he’s got arms like missile launchers, mention it, mamalas! For VIP-Schmoozing, prepare. Before you put Sergei Brin in a snooze by asking him how he co-founded Google, Google him, mamalas! Ask about saying Maariv while on a space adventure and he might invite you to share a Stolichnaya and Syrniki.

#3: Share! She had a Caesarian, you had a Caesarian – and you both have stomachs down to your knees. He loves baseball, you were hit by one. You both had relatives that went to geeky Camp Kukalyn! Find a basis. If you listen a lot, then share a little, soon you’ll be sharing on Twitter.

#4: Say the Improbable! Once you have mastered the basics, you’re ready for ELS (Expert Level Schmoozing). Let me illustrate. Some years ago, I was in a New York restaurant. The maitre d’ motioned toward a pole that hid a songwriter –a Broadway legend. “But he hates talking,” he added. When Mr.Legend moved toward me to pay his bill, I whispered, “Thank you.” Shocked he asked “for what?” I mentioned a song he wrote in the sixties, that maybe three people sing. We schmoozed for two hours.

There you have it. Four ways to break the ice without a pick. And should you have any doubts, questions, criticisms … we’ll shmooze a little. (Bring cake).

Spare Time!?
Why Are The Prayers Of Yom Kipur So Repetetive?
Ha'azinu 5783: A Time for Unity!
Twisted Thinking
Comments