The Art of Positive Thinking 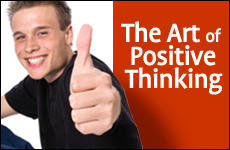 You know the feeling. You're sitting at Thanksgiving dinner with grandparents, siblings, extended family, and cousins, looking forward to seeing your siblings who have moved out in different directions. The conversation’s going well; you’re all laughing and reminiscing about old times.

And then he starts – the relative who always has something negative to say. He's the complainer who has discontent written all over his face. In Yiddish we say that he has a ‘farbissinerpanim’. Nothing is ever good enough. He brings up old hurts and rivalries. The food isn't to his liking. He squabbles with everyone about everything. He sulks. He grumbles under his breath. He rolls his eyes as you speak. And of course, he’s always right and knows better.

Dinner is ruined. You can’t really put your finger on it but you are left with an awful taste in your mouth. It is the power of the negative that can extinguish your positive feelings and cast a shadow in the room.

If this is the picture of just one Thanksgiving meal, imagine what happens when children grow up with parents who are negative thinkers?

Pessimistic parents breed children who lack self-esteem. Finding fault, even in oneself, becomes second nature. These kids are so used to hearing ‘down thoughts’, it becomes difficult to see the good. Criticism and observing life through a ‘bad eye’ becomes a way of life. Nitpicking, sarcastic comments, and knocking each other contribute to sibling rivalry and fighting.

When we raise children with a positive, can-do attitude we will find that they see life through a good eye. Instead of saying that things are impossible, disgusting or finding constant problems, these kids have a positive way about them. But the attitude must begin with us.

How often have you gone on vacation and made a face when shown your room? What about getting served in a restaurant and constantly complaining about the service or food you ordered? Do you grumble in the car while returning from a family wedding or get-together?

These are just a few little examples of the day to day interactions that mold our children’s views of the world. What we fail to recognize is that it is the little moments that shape our children’s attitude. They are watching and listening. They are taking it all in. It is a trickle-down pessimism that creeps into the bones of our home. We can make a difference if we decide to see daily events that occur through a more positive eye. Our children will pick up on our attitude-they always do.

Recently I was asked to speak in a community outside of N.Y. It was one of many lectures that I was giving. As the day of the event approached, I spoke to the program coordinator to review the details. We confirmed that I would be staying in a local hotel and flying home the morning after.

Late that night I went online to confirm the hotel reservation. I typed in the name of the hotel, it was a well-known chain. And then the words BED BUG ALERT jumped out at me. Photos, first hand testimonies and awful comments filled my computer screen. Ugh! What should I do?

At midnight I decided that instead of flying home, I would find a way to drive home. As far as it was, it was still a doable car trip. I emailed the event coordinator with my new plan and we found someone to drive me both ways. I was then informed that the trip normally takes five hours but with traffic it would take seven.

Seven hours in a car each way?! Well, I had already made my decision and I was committed to speak. The morning of the big drive, I woke up sick. I had a hacking cough and my whole body hurt. Knowing that I’d be in a car for 14 hours did not help me feel better. Talk about negative thinking!

We left at 11 a.m., for a 7 p.m. speech. I had been advised to tack on an added hour for traffic just in case. I was not exactly in the most positive mood.

We arrived at our destination at 4 p.m., three hours early! Now my mind really started to fill with the negative thoughts.

Why did you think you had to leave so early?

Why did you have to drive anyway?

What are you going to do now for three hours? You could’ve been home all this time!

And then I realized that I was doing exactly what I knew in my heart we should not do. I was thinking negative.

I decided to do a turn-around. No more negative thoughts. No more contemplating the day through down observations. Positive thoughts began to fill my mind. A feeling of peace took over.

That evening I met a special group of individuals. They were warm and inviting. They were filled with deep questions and concerns; wanting to raise children with character and soul. I was moved by the community and felt privileged to be there.

We started back home. I felt my eyes closing. It must have been 1 a.m. when I was roused by the loud blare of a siren. Could this police car be stopping us?

“This is just what I need”, mumbled the driver. ”These state troopers are the toughest guys. This is a terrible ticket for me to get.”

“Let’s think positive,” I said, as the trooper approached the car.

I did not want to give up on my positive thinking that I had achieved that evening.

“Think positive?” the driver grumbled. “What can be positive about a state trooper giving me a ticket?”

“Don’t worry,” I said confidently. “You’ll see it will all be okay.”

He muttered something unintelligible under his breath.

When we see life through a positive lens we can withstand the daily aggravations that can easily grind us down.

The officer approached the car. He solemnly asked for license and registration and took the papers to his car. A couple of minutes later he came running back and threw the documents into the car’s open window.

“I just got called to a huge emergency. I have no time. Take this as a warning”

I didn’t want to say ‘I told you so’ but inside I knew that positive thinking is the way to go.

Of course there will be times that we do get the ticket, find ourselves stuck in heavy traffic or have things not go our way. But at least we know that when we see life through a positive lens we are giving our children the tools to recognize the blessings in life. It becomes easier to withstand the daily aggravations that can easily grind us down. Instead of constantly grumbling, they can use their positive attitude to become cognizant of the good, develop a joyful spirit and develop bonds with family and friends that they will count as their life’s treasures.

Who are You to Judge Me?

Shofar in the Year of Corona

How to Fight Through the Worst of Times