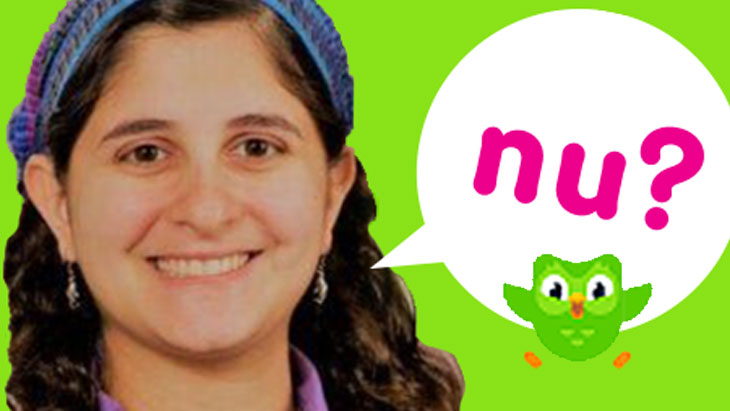 Duolingo, the popular language-learning app with a global following, recently made an exciting announcement: users can now learn Yiddish, choosing to study Yiddish as little as five minutes a day, with fun lessons sent to their phones.

I signed up for the course and loved hearing some of the initial Yiddish sentences. The first lesson featured Yiddish words that sounded much like English: “Mom, a balloon!” a cartoon girl with blue hair said in my first session (Mama, ah balon); a boy with bright orange hair offered to sell a zebra for a dollar (Ay dolar for un zebra). It was zany and fun; I was hooked.

“Yiddish is my first language,” explains Meena Viswanath, one of the volunteers who created Duolingo’s Yiddish program. Meena and her colleagues spent about 18 months working on the course together, synthesizing different Yiddish dialects and modes of speaking to create an easy-to-use online class. A passionate Yiddish enthusiast, it was a labor of love for Meena, who volunteered her time and efforts, as did all the other creators of the course.

Meena grew up in a modern Orthodox Jewish community in New Jersey and her family was at home in their Orthodox synagogue. While almost none of her suburban neighbors knew Yiddish, Meena’s family spoke the language in their home. 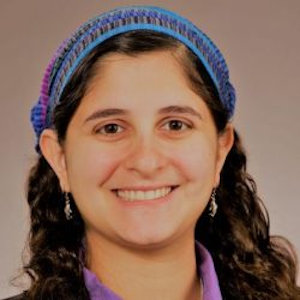 Meena’s grandfather Mordkhe Schaechter taught Yiddish at Columbia University. Her mother, Gitl Viswanath, is a prominent Yiddish-language writer; she recently published a comprehensive Yiddish-English dictionary. “My brother translated Harry Potter into Yiddish,” Meena relates. Meena and her siblings grew up attending a Yiddish-language Sunday school in New York each week, in addition to her regular Jewish school schedule. The family attended Yiddish Vokh, a Yiddish-speaking retreat in upstate New York, during the summer. Meena continues to attend with her husband and young children today.

While many other Jewish families were shedding the Yiddish that their grandparents and great grandparents spoke, Meena’s family continued to value the mama loshen (“Mother Tongue,” as Yiddish is sometimes known) highly. 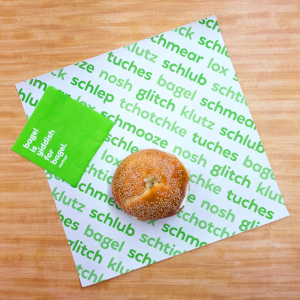 Meena has known many diverse Yiddish speakers and students of the language. “Some people are looking for a connection that was cut off when their grandparents and their great grandparents came to America and gave Yiddish up to get ahead.” With the world of Yiddish literature so diverse, she notes that there is something to interest every type of person, from religious to secular. “I think everybody who comes to Yiddish has their own reasons for studying it. For me it’s the language of my ancestors; it’s what connects me to my history, to my family, and to my people.”

She’s also noticed some common misconceptions about Yiddish. One is that Yiddish isn’t a real language like English or Spanish. “People who grew up with more ‘Yinglish’ (a way of speaking English that uses a few Yiddish words) than Yiddish think Yiddish is just English with a funny accent.” In reality, Yiddish is a complete language, with its own vocabulary, grammar and rules.

Another misconception Meena has noticed is that Yiddish is funny. “Yeah, you can tell a joke in Yiddish, but as a language itself it’s no funnier than any other language.” Some people seem to have a negative view of Yiddish as a language that was only confined to the shtetls (Jewish villages) of Eastern Europe and that died out. In reality, Meena explains, Yiddish is a dynamic, thriving language that’s spoken by between 500,000 and 600,000 Jews today.

“One thing I do think that’s not a myth is that Yiddish as a language is a repository for the Jewish experience.” Yiddish draws heavily from High German, but also includes many Hebrew words as well as vocabulary and grammar constructions from other European lands in which Jews lived. A largely European-sounding language, Yiddish is written using the Hebrew alphabet, and has a strong connection to the Land of Israel.

Some Yiddish expressions refer to Jewish traditions and the Jewish religion. “It’s really difficult to learn if you don’t know anything about Judaism,” Meena explains.

For example, a Yiddish way to say that someone arrived too late for something is Kumen nokh nile – literally it means “Coming after Neilah” (the final service of Yom Kippur, recited just before the end of the holiday). A Yiddish expression for arriving just under the wire is similar: haltn ba neilah, coming just in time for Neilah.

Something that is very short – often a romance – can be described in Yiddish as doyern fun Ester Tones biz Purim – lasting from the Fast of Esther (which occurs the day before Purim) to the Jewish holiday of Purim.

A Yiddish expression meaning to be bowlegged is hobn kadme-ve’azle-fis – literally to have feet that are like the cantillation in the Torah known as Kadma and Azla, which look like two parentheses.

When it came to distilling this knowledge into Duolingo’s Yiddish course, Meena worked with a diverse group of Yiddish speakers from different backgrounds. Most contemporary Yiddish speakers are Chassidic Jews, and the team included Jews who were raised speaking Yiddish in close-knit Chassidic communities. They labored for many months to synthesize Yiddish’s many dialects into one course.

There are three broad Yiddish dialects, Meena explains: those from northern Europe including Lithuania; a Galician dialect (Galicia was a region spanning Poland and Ukraine); and a dialect associated with Romania and Ukraine. “And within these dialects there are sub-dialects.”

“One word we had trouble with is the word for cup,” Meena recalls. “I say tepl. It’s a diminutive of pot.” But in the Chassidic world, the word tepl has a more specific meaning: the cup that is used for ritually washing one’s hands before eating bread and at other times of the day. “They would never drink from a tepl,” Meena says. “They would call a cup gluz and I use the word gluz to mean a glass, not a cup.” 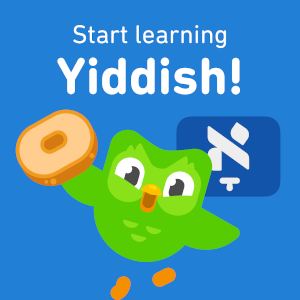 Another difference evident between the team’s Chassidic and non-Chassidic members was the use of many more English words in the Yiddish that Chassidic Jews speak. Since Yiddish is the first, everyday language for so many Chassidic Jews, they tend to coin new slang, often drawing on English words.

One difficulty the team encountered was how to say thank you. “We say a dank. It’s accepted in all dialects.” But in the Chassidic world, a dank sounds very formal. Instead, they say yasher koach, a Yiddish phrase informed by two Hebrew words: yashar (straight) and koach (strength).

The Duolingo team made their course extremely flexible, providing several different synonyms when needed to encompass Yiddish’s various dialects. When it came to pronunciation, they decided to use the accent spoken by Jews in the Satmar Chassidic community.

Meena and her colleagues were keenly aware of the importance of their task. “We knew that as soon as this course went live, more people would have some exposure to Yiddish in the first week than in (total in) the past twenty years.”

In its first week, 190,000 people have begun studying Yiddish with Duolingo’s course. She hopes that by learning Yiddish, more people will be able to experience and appreciate some of the wonderful works that are written in the language.

“Many people may not be aware of it, but there’s a very rich literature in Yiddish,” Meena explains. Many people have heard of a Yiddish writer like Shalom Aleichem, but there are many more writers from all over the world using Yiddish to express poetry, prose, political writings, history, and philosophy. “Isaac Bashevis Singer even won a Nobel Prize for his literature in Yiddish,” Meena points out.

What is the Holiest Spot in the World for the Jewish People?

The Cool Jews
It Takes A Lot Of Faith To Be An Atheist
How Instagram Brought Back This Nostalgic Soup
What Makes Eli Run?
Comments