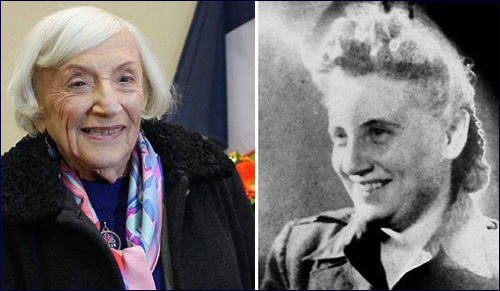 German soldiers thought she was a blonde bimbo looking for her Nazi fiancé. How did this courageous Jew from an Orthodox family become a spy?

Marthe Cohn was an unlikely French spy behind German lines in World War II. In her 20s she was a svelte blonde with blue eyes and fair skin. “They took me for a bimbo,” the diminutive 97 year old recently told an Atlanta audience.

Tougher than some might expect, Cohn joined the French Army and became a member of the intelligence service of the French First Army. Thanks to her perfect German accent, she was able to slip behind enemy lines and retrieve inside information about Nazi troop movements. 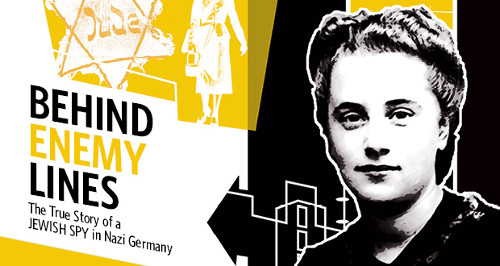 Risking death, Cohn traveled throughout the countryside and troops believed her story that she was a German nurse trying to find out what had happened to her Nazi fiancé after the Allies captured him. She learned where the soldiers were going next and was able to alert Allied commanders.

Courageously accepting life-threatening missions into German territory, the tiny blonde never mentioned to her superiors that she was Jewish. 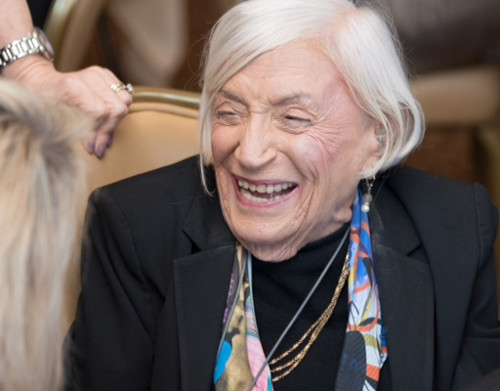 How did a young woman from a devout Orthodox family with a rabbi as a grandfather end up becoming a spy? That’s a story Cohn only recently started to share with audiences across the world.

Cohn was born in 1920 and lived just across the German border in France when Hitler came to power. Her family provided shelter for Jews fleeing the Nazis. But in a twist of fate, her homeland soon fell under Nazi rule also. 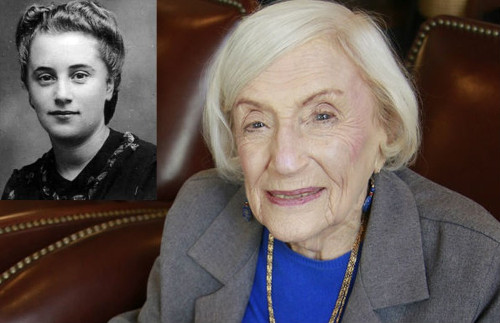 Her parents had grown up when Germany controlled the region, hence they spoke only German. She and her six siblings spoke German with their parents, but spoke French among themselves.

Her family went about their business in the face of creeping restrictions on Jews’ daily lives. “With the stamp ‘Jew,’ you couldn’t go to any public space, train station, bus station. You could go to the store to buy food only after 4:30 when everything was sold out. We had a one-hour window to do our shopping,” she says.

Fortunately, kind shopkeepers set aside goods for them to buy after 4:30.

Cohn studied nursing and became engaged to a young medical student named Jacques. They were both involved in resistance activities to save fellow Jews from the Nazi regime. Jacques was ultimately arrested and executed.

As the Nazi occupation escalated, her family fled to the south in non-occupied France with false papers that didn’t identify them as Jews. Meanwhile, a sister was imprisoned for her resistance activities, then transferred to a camp on the fringes of Poitiers, France. Although the family had a plan to help her escape, the young woman refused because she believed the medical help she offered children in the camp was too important.

“Years later we found out she was deported to Auschwitz and never came back,” says Cohn.

In 1944, after the liberation of Paris, Cohn enlisted in the French Army. The commanding officer declared, “I have enough nurses. You are going to be a social worker.” But when Army officials learned she spoke fluent German, they recruited her for an intelligence position—a spy.

The Alibi that Pulled Heartstrings

Cohn underwent intense training for several weeks. She interrogated German prisoners of war to learn the plan of retreat from Alsace to Germany. After procuring information from the POWs, she eventually was sent to cross the border into Germany. It took more than a dozen attempts until she was successful.

Cohn approached German troops who were sympathetic when she claimed she was desperately looking for news of her missing Nazi fiancé. Through this ruse, she learned where Nazi troops were going next. She then used coded messages to relay information she gleaned to the French intelligence.

Cohn is credited with providing intelligence that helped shorten the war and save lives.

Among the important tidbits she passed along: the fact that the Siegfried Line near Freiburg had been evacuated and a remnant of the German Army waited in the Black Forest to ambush enemies. The information helped Allied commanders prepare for German troop movements.

Cohn is credited with providing intelligence that helped shorten the war and save lives.

For her meritorious service and acts of bravery in helping the Allies defeat the Nazis, she earned France’s distinguished military honor, the Médaille militaire.

For more than half a century, Cohn modestly kept her past a secret. Not even her children knew to what extent she had helped defeat the Nazis. Then in the 1990s she agreed to be interviewed for the Shoah Foundation and the United States Holocaust Memorial Museum and tell her experiences about fighting the German army.

In 2002, she published a book of memoirs, “Behind Enemy Lines: The True Story of a French Jewish Spy in Nazi Germany” (Harmony Books). A California resident married to retired anesthesiologist Dr. Major Cohn, the nonagenarian has given voice to her memories ever since. The couple travels and takes the stage together to present Marthe’s amazing story. A documentary about her life, “An Unusual Spy,” is also in the works and scheduled for release this year.

How Did She Survive?
The Softball Player
How This 6 Generation Bread Baker Brought Back Israel’s Ancient Grains
Olivia Newton John’s Grandfather was a Nobel-Prize Winning Jewish Physicist
Comments