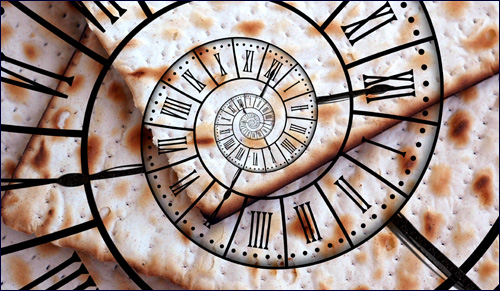 Early in the Passover Seder, we point at the matzah and say “this is the bread of our affliction.” It is the poor man’s bread that we ate when we were slaves in Egypt. We then tell the story of the Exodus.

However, later in the Seder, right before dinner is about to be served, we pause to highlight the three foods that anchor the Seder: the Passover sacrifice (which we only ate in the time of the Temple), the matzah, and the maror (the bitter herb). We then formally recite why each one is present. In the case of the matzah, the answer should have been obvious. We’ve already said we eat the matzah because it is the bread of affliction that our forefathers ate in Egypt. Except that’s not what we say. Instead, we say that we eat it because our dough didn’t have time to rise before God rushed us out of Egypt. The matzah transforms before our eyes from the bread of affliction to the bread of salvation. The symbol of our oppression and sadness comes to represent our jubilation of being freed from Egyptian slavery!

How do we manage that transmutation trick?

An example of this kind of reliving comes from the series of Psalms known as Hallel, which literally means “Praise.” On other holidays, these Psalms are said as Hallel only during the day, and usually in synagogue. The one exception is the night of the Passover Seder, where we recite Hallel at night, both in synagogue and at our Seders.

The reason is obvious. When we recite the Hallel in synagogue, we remember the historical event, but when the sing the Hallel on Seder night, it’s because we are reliving our own Exodus from Egypt.

In the opening reaches of the Seder, we say, “We were slaves in Egypt,” not “Our ancestors were slaves in Egypt.” What’s the difference? One is telling a story that happened to someone else; the other is living an event that is happening to us personally. Passover is not just a time of remembering, it’s a time of re-experiencing. That’s how our time machine works.

When we take the time to relive rather than retell, the Haggadah carries us from slavery to redemption in three separate ways. First, it recounts the physical departure: we were captives in Egypt and couldn’t leave. Second, it recalls the spiritual salvation: we were idolaters in Egypt and God saved us and led us on a path of spiritual refinement. Third, there is the psychological maturity: there are expressions of gratitude, where we sing songs like Dayeinu which help us develop a deep sense of gratitude – one of the central Jewish values, but one that can only be experienced by people who are truly free.

Each step of the way, our time machine only works if we develop our personal awareness of what we are doing. It’s too easy to say “the Egyptians oppressed us” without imprinting that on our memories or souls. But when we imagine the great difficulties of Egyptian life as a personal experience (full disclosure: I’m pretty sure I’d have overreacted and gotten myself killed by an Egyptian taskmaster, but for the sake of the Seder I have to imagine myself living all the way through to the redemption), when we put ourselves back in the events, we travel through time and (temporarily) become slaves who are about to be liberated for the very first time. And the matzah is transmuted from the bread of affliction to the bread of salvation.

That’s how Jews travel through time on Seder night. The matzah transforms from a symbol of oppression to a symbol of freedom as we evolve from slaves to free people.

Rabbi Dr. Gidon Rothstein received rabbinic ordination from Yeshiva University and holds a Ph.D. in Medieval Jewish History from Harvard University. He is the author of As If We Were There: Readings for a Transformative Passover Experience

Passover: What Does it Mean to be Chosen?

What Is Freedom?
Should I Break Up, Get Engaged or Keep Dating?
Time Is Your Precious Commodity
A Constant World in Flux
Comments
MOST POPULAR IN Passover
Our privacy policy