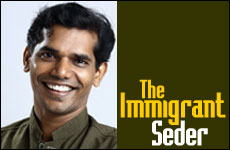 Passover ensures we retain the burning passion to get ahead.

• Nicholas Mycroft Christensen, a 16-year-old German-born high school student living in Alabama didn’t hear well. Despite using a hearing aid, he often had no idea what people were saying. So he headed to his parents' garage and hunkered down. Two years later he emerged with a new device that significantly improves word recognition. It uses an algorithm he invented called “EarMeNow” that filters words out of background.

• Yifan Li, the prodigal son of Zhuqing Li and Yun Zhou, knows the importance of good eyes. An avid fencer and internationally recognized pianist, Yifan constantly follows the minutest of movements. Yet Yifan is aware of the great shortage of retinal pigment epithelium (RPE) cells, cells that when transplanted into the human eye, change the lives those with visual impairments. So Yifan took stem cell lines from mice, worked his magic in the lab, and enabled scientists to use them to grow retinal cells. Problem solved, let’s get back to fencing!

• Akhil Mathew, an Indian-born high school student in New Jersey, changed the way we track packages. For fun, he helps writes college level math textbooks. On the other coast, Sarine Shahmirian, a California high school senior of Armenian descent, uses her spare time to create cancer treatments that are both effective and non-abrasive to the body. She goes back to Armenia on vacation to rebuild homes and protect the environment.

Immigrants comprise 12.4% of the U.S. population, yet took 67% of honors at prestigious talent searches.

These high school students were finalists in this year’s Intel Science Talent Search. Of 1,736 applicants, the field was narrowed to 40 finalists. As soon as I read the list, something was glaringly obvious: over two-thirds of the total group, 27 of them, were immigrants or children of immigrants. They came from a variety of countries, including Israel, Uganda, Turkey, Germany and Armenia, with China and India the clear favorites.

Immigrants only make up 12.4% of the U.S. population, yet they took 67% of the honors at the nation's most prestigious talent searches. Why is this? What drives immigrants to excel, to push themselves much harder than people who have lived here for generations?

The sociological explanation most commonly given for this phenomenon is that immigrants are often coming from a place where living conditions and freedoms are severely limited, either by communists governments or crushing poverty. China and India, the two countries whose immigrants account for 53% of the finalists, both have over a billion people and rampant poverty. When living with intense constrictions, a society develops a strong desire to get ahead. Knowing that education is one of the keys to social mobility, the emphasis in these cultures on education and hard work is paramount.

Americans, on the other hand, are enjoying a generation of unparalleled wealth. People rarely die of hunger in the U.S., millions living in absolute squalor is not rampant. The overall standard of living in the U.S. today is higher than it ever was in history. (Click here for graphical analysis)

The unfortunate byproduct of this sustained wealth is that many American students lack the hunger, drive, and work ethic of their immigrant counterparts. The further we get from the challenging environments our grandparents and great-grandparents experienced, the less we feel the urgency to fight for what they would have fought for.

Our spiritual life presents same challenge. When the Jews came out of Egypt, they were on fire. They had just completed 210 years of intense suffering. Physically, they were forced into harsh slavery, and beaten into submission. Psychologically they were taught to think they were worthless, consigned to endless slavery. But then God redeemed them from the mightiest nation in the world in a series of earth-shattering miracles.

Freedom unleashed the strongest desire to get ahead, to change their lives for the better, and change the world with them. God provided them with the perfect tool, the Torah, which they embraced wholeheartedly.

But that was thousands of years ago. We never experienced slavery, we never felt the pain, we never saw the miracles, and as a result we often lack the drive and the work ethic to get ahead spiritually the way that previous generations might have felt.

On Passover we regain the wonderment upon being redeemed and desire to reach for the sky.

The Passover Seder is the remedy for this sociological phenomenon. “In every generation, each individual is obligated to see himself as if he actually went out of Egypt” (Talmud - Pesachim 116b). The purpose of the Seder is to recreate the feeling of getting liberated from a place of constriction. It is an exercise of trying to regain the sense of wonderment our forefathers felt upon being redeemed and the subsequent desire to reach for the sky. The Seder is supposed to be the fuel that inspires the rest of the year.

We do this by detailing the harrowing difficulties our ancestors felt, the backbreaking labor they endured, but even more the total loss of control over their lives that they felt. But we go from discussing the lowest places to the overwhelming joy they experienced as God rescued them. Painting the door red, putting the sign out that showed their readiness to take control of their lives, God lifted them up and carried them out on eagle's wings.

The success of our Seder is not in how fluffy the matzah balls are, nor how many pounds of matzah or bottles of Manishewitz we consume, but in how much we recreate a sense of exodus through our discussions and action. How much we can involve the children so that they stay and learn instead of playing with their cousins in the basement. How much we leave the Seder feeling like someone who just got out of a place of constriction, and has found the pathway to redemption.

Just like in the Intel Talent Search, in the Seder Talent Search it is always the “immigrants” who have just come out of Egypt who take the big prizes. And it will be we immigrants who will propel us out of our current complacent state and into our final exodus.

Exodus: Retelling Our Family’s Story
Baked Burik Recipe
Blocked Goals and Anger
Why the Mezuzah is Placed on a Slant
Comments
MOST POPULAR IN Israel
Our privacy policy