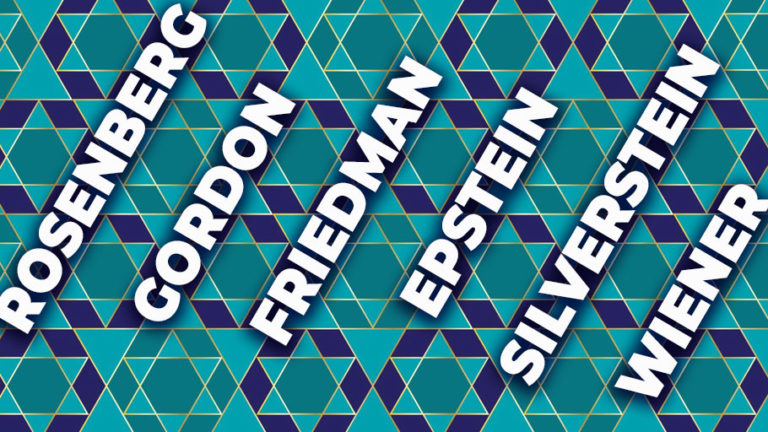 Common Jewish names can tell us a great deal about Jewish history and values.

What’s in a last name? For many Jews, surnames are a way to recall family history, sometimes going back thousands of years. Some Jewish last names hint at towns or regions where families used to live, or mark links back to the Biblical patriarchs.

For thousands of years, most Jews were called by their first name, then ben (for a male) or bat (for a female) the name of their father or mother. Jews are still referred to this way in synagogue, at weddings, and when they are in need for prayers.

Jewish surnames started to gain widespread currency after Jews were expelled from Spain in 1492. Some wanted to recall the places their families had left. As last names became more popular across Europe, more and more Jews began to adopt them, often choosing names that referred to local landmarks or places. This process accelerated under the Austro-Hungarian Emperor Joseph II, who ruled much of Europe from 1765-1790 and forced all his subjects to adopt last names. These names had to be German, which explains why so many Jews who hail from Eastern Europe and never spoke German sport Germanic-sounding surnames.

Other Jews sport anglicized or Hebraized last names. Here are some common Jewish last names and the meanings behind them.

These names are patronymic (named after one’s father) and recall ancestors who were named after this illustrious patriarch.

Abecassis (also variations including Abiksis, Abucassis, and Cassis) – This Sephardic name incorporates a variant of the prefix “Abu” meaning father of, and “Cassis”, which means storyteller in Arabic. In past years, being a cassis was a profession, and many North African Jews engaged in this job and adopted the surname of their profession.

Ash (also the variant Asch) – This is short for European areas where families originated. Ash can refer to Aisenshtadt (Eisenstadt in modern day Austria) and also Amsterdam.

Benjamin (also the variations Binyamin) – These names are also patronyms, recalling ancestors named after the Biblical Benjamin, who was one of Jacob’s sons (Abraham’s great grandson) and founded one of the 12 tribes of Israel.

Berlin (also Berliner) – Seemingly referring to the German capital, this name is also thought to be a patronymic meaning “son of Berel”.

Berger (also Berg) – These are common names referencing the type of place one’s families hailed from: Berg refers being from a hilly place, and Berger refers to being from a town (“burgh” in German).

Bloch (also Block) – This name is derived from the old Polish word wloch, which originally meant foreigner and then began to be used to refer to people from Italy. Many Jews lived in Italy, which had a thriving population in the Middle Ages, and some moved into Eastern Europe, gaining this moniker as a last name.

Bouskila – This Sephardi Jewish surname is derived from the Arabic word shakila, which was a distinguishing cloth, usually red and white, worn by Medieval Jews in North Africa. The prefix “bou” or “bu” means father of, and refers to one who used to wear this distinctive Jewish outfit.

Dvorkin (and variants including Dworin, Dwarkin and Dvarkin) – This is a matronymic name derived from the Jewish name Devorah, meaning bee. In Biblical times, Devorah was a famed prophetess and leader who orchestrated Israel’s victory over their tyrannical Canaanite oppressors.

Eidel (and variants including Edel and Adel) – This is a matronymic name derived from the Yiddish women’s name Eidel meaning refined or sweet. One of the first Jews recorded as having the name Eidel was Rabbi Samuel Eidel (1555-1631) who lived in Poland. His mother-in-law Eidel Lifschitz was a businesswoman who financially supported the yeshiva he ran for over twenty years, and it appears he took her name as a surname in tribute.

Eisenstadt - Literally “Iron Town” in German, the town of Eisenstadt is the capital of the Austrian province of Burgenland, and denotes that a family originally lived or took their name from the town.

Epstein – This is one of the earliest Jewish surnames and likely comes from the town Eppstein in the German province of Hesse. The earliest written mention of Epstein as a Jewish name comes from 1392 and marked a prestigious rabbinic dynasty.

Fogel – This name comes from the old German word “fugal” meaning bird. In old times, this was a term of endearment.

Friedman – A popular Jewish surname from the 1600s, this derives from the old Germanic word “fried” meaning peace – literally meaning a man of peace, Friedman was used to refer to a holy person and also to a friend.

Garfinkel (also Garfunkel) – Tthis name was probably adopted by families in the jewelry business. The name derives from the Yiddish word “gorfinkl” and German “karfunkel” which means, as the name implies a carbuncle – yet years ago the word also was used to refer to red-color precious stones such as rubies and garnets.

Gordon – This name can refer to hailing from Grodno in Lithuania and can also reference the Russian word gorodin meaning a town-dweller. With its easy pronunciation and non-Jewish connotations (Gordon is also a common Scottish last name) some Jewish immigrants to America and Britain chose to change their names to Gordon as well.

Hart (also Heart) – From the Germanic word “hart” for a stag or deer.

Jacobs (also variations including Jacob, Jacobson, Jacoby, Judah, Idelsohn, Udell and Yudelson) – These are patronyms from the Hebrew name Jacob, the third patriarch of the Jewish people.

Kessler (also Kesel and Kesl) – This name is thought to be a patronymic name meaning son of Kesl. It also can refer to a kestler, a Yiddish term for a married man who lives with his in-laws (which was a common practice among Ashkenazi Jewish families in Europe).

Malkin (and variants including Milliken, Milken and Miliken) – These are matronymic names derived from the Jewish women’s name Malka, meaning queen in Hebrew.

Manishewitz – Meaning son of Menashe. Manashe was the grandson of the patriarch Jacob and founded one of the 12 tribes of Israel.

Margolis (and alternative spellings including Margalis and Margulis) – This is a matronym name (derived from a female ancestor) from Margolit, the wife of a man identified as Rabbi Jacob who lived in the German town of Nurenberg in the late 1400s. Margolis means pearl in Hebrew, and this 15th Century Margolis, whose descendants included many prominent religious scholars, is commemorated in this common Jewish surname. Margolis is a more common spelling among Lithuanian Jews; Margulis is a favored spelling among Jews from Poland and Ukraine.

Mendelsohn (also the variation Mendelovich) – Meaning son of Mendel, a popular Yiddish man’s name. It’s a variant of the Hebrew name Menachem, which means comforting. In Germanic areas, the suffix “-son” or ”-sohn” was added to some names to denote “son of”. The suffix “-ovich” meant the son of in Russian speaking areas.

Montefiore – Referring to a family who lived in the region Montefiore in Italy, in the Papal States.

Nagler – This referred to the professions of building, or of making and selling nails, and comes from the old German word for nail, “nagal”.

Navaro (also Navarro) - A Jewish last name referring to a family’s history of living in the Navarre kingdom of Spain before the expulsion of Jews from Spain in 1492.

Perez (also Peretz) – Commonly a patronymic name derived from the Hebrew name Peretz. In the Torah, Peretz is a grandson of Jacob (Genesis 38:29).

Plotnick (also Plotnik) – From the Polish word “plotnik” meaning a builder, this likely refers to the family profession at the time this surname was adopted.

Rosenthal – Meaning “Valley of Roses” in German, this name was particularly popular in the area surrounding Minsk, where many Russian Jews favored beautiful-sounding German names.

Rosenberg – Literally meaning “Mountain of Roses”, this name was adopted by some Jewish families because of its beauty and evocative nature.

Shnitzer (also Schnitzer)- This means carver in German and refers to a family’s occupation.

Teboul (also variations including Toubol, Touboul, Tovel and Abitbol) – This popular Sephardic name and its many variants indicate that a family might have once been musicians. It comes from the Arabic name for a type of drum, a tabell – and that in turn likely entered Arabic from Aramaic “tabla”, which also means a type of drum.

Wallach - This can refer to someone from the German town of Wallach, and it can also refer to the Middle High German word “walhe” which means a foreigner from a Romance country. This name likely was given to some Jews who migrated from Italy which had a thriving Jewish population, north to Germanic lands. (See also “Bloch” above.)

Warshavsky (also Warshauer) – Denoting a family was from Warsaw.

Wiener (also Wein and Weinberg) - From the city Vienna.

Zuckerman – From the Germanic word for sweet, “zucker”, this refers to a dealer in sugar or confectionary. It also was adopted by some Jewish families because of its “sweet”, pleasant connotations as an attractive surname.