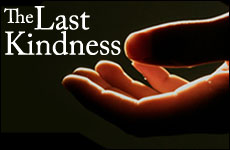 One night the hevra kadisha called. Despite my squeamishness, they needed my help.

I had always been fascinated by the hevra kadisha, the ritual burial society that prepares the dead before they are placed in their coffins. In Jewish communities, this task – the taharah, as it is called – was usually performed by the elders.

It was considered the highest form of kindness to perform this last act before the grave because there is no payback from the dead. Yet, there was small likelihood of my performing this good deed. While Jewish, I wasn't exactly an elder. Also I was squeamish.

Then I moved to the Passaic/Clifton area. In my new synagogue, there were few elders left; most had moved to Florida or elsewhere. Should I join the hevra kadisha? Or perhaps you had to be invited. I didn't think about it too much. I got sidetracked with my newborn, my first novel that had just come out, and the demands of making ends meet.

A year ago, I got stuck on a scene in my second novel. A hundred and twenty pages into my book, a mystical rabbi – a kabbalist – dies, and his heartbroken assistant performs a taharah. I had never read a taharah scene before in fiction, and I wanted to do it justice.

I called up a few members of the hevra kadisha and they described, step by step, what happens. But I knew it was no good. I had to be there. I had never even seen a dead person before. But how could I show up at a ritual burial with a notepad and pen? I sure wouldn't want any fiction writer at my taharah.

One night, though, the hevra kadisha called. They were stuck for a fourth person. Could I help? Well, I thought, they needed me. It was legitimate, and I showed up a few hours later at a Jewish chapel off Allwood Road in Clifton. A friendly custodian unlocked the door and let us in.

Actually there were two taharahs going on at the same time, in separate rooms – an atypical night. I was to be the floater, called from room to room as needed. Everyone washed and put on yellow plastic robes, gloves, masks and booties, making me wonder what kind of gory mess I'd actually see.

I averted my eyes from one of the bodies lying on a table and watched the others get busy. One woman was breaking pottery shards, another was cutting up cloths and filling buckets of water, a third was stuffing a small pillowcase with straw. I was the designated pray-er, the one reciting prayers from a laminated card, depending on what part they were up to. Between prayers, I helped the others.

Here lay someone who clearly had expected to be doing other things that day.

Eventually my eyes went to one of the deceased, a thin elderly woman from a Jewish nursing home nearby. The woman in the second room looked to have been in her forties. I marveled at her pretty eyes lined in blue, the pink nail polish perfectly applied to her toenails and fingernails. She looked too alive. Here lay someone who clearly had expected to be doing other things that day.

I accidentally brushed against her skin, and my own skin jumped. Even through my plastic gloves I could tell there was no energy in that skin, no life force. I couldn't have known what dead was until I had touched it.

My hand reached across the woman's body to pass a cloth, and someone gently pushed my hand back. Oh. I remembered from the booklets: The soul was considered to be still hovering near the body, and it was disrespectful to pass things over the torso. I uttered from the prayer card, ''His hands are like rods of gold set with emeralds, his belly is polished ivory, overlaid with sapphires.''

As each part of the body was washed, that small section was exposed, then covered. It comforted me to know that when I died, my body wouldn't be lying exposed for even those kind volunteers, but ultimately strangers, to see. ''His legs are pillars of marble, set upon sockets of fine gold. His countenance is like the Lebanon, excellent as the cedars.''

Someone asked me how I was doing. ''Okay,'' I said. I had feared I might faint. Actually the only thing getting to me was the prayers. ''His mouth is most sweet, and he is altogether lovely. This is my beloved, and this is my friend, O daughters of Jerusalem.''

What are they talking about, I thought. The woman with the pink nail polish – her mouth had become twisted, bloodied and distorted in death. It wasn't ''most sweet.'' I couldn't look at her. As for the other woman, I didn't see any dove's eyes, or legs that were pillars of gold. Instead I saw chicken legs! Why were they describing beautiful bodies? What was I missing here?

I tried to imagine the things this old woman had done with her legs, the meals she had made for her family while her legs supported her, the times she had chased after stray children, the eyes that had looked at a loved one with patience or tenderness, a hand that had made useful or pretty things or held a sick friend.

The prayers reminded you of the body's former splendor. Here in the room, I felt its grief.

Were the prayers saying that the body is beautiful because of what you did with it, what you accomplished? Maybe. But looking at myself and at the other women moving vitally about, I understood that any body that is alive is beautiful, and any body that is dead has lost that claim to beauty forever. The prayers reminded you of the body's former splendor. Here in the room, I felt its grief.

We took buckets of water and doused the body completely. We chanted, ''You are pure,'' three times. We dressed the body, no simple matter, in plain white clothes, the clothes a priest wore, tying God's name into the belt across the waist. After the pottery shards were placed on various parts, and a faint sprinkling of soil from Israel, we did a final tucking and adjusting for the long evening ahead, then placed the cover on the coffin.

In the end, I remembered enough (without a notepad) to create the scene for my novel. I remembered how a candle was placed at the head of the coffin, and how we all gathered around.

The group leader turned and in a low, warm voice addressed the deceased by name. ''We the women of the hevra kadisha ask your forgiveness if there was anything we did while performing the taharah that wasn't respectful or kind enough. We tried to do the best we could.'' Again she said her name, and, ''Please forgive us. We pray that things go well for you.''

After this experience, the author decided to become a member of the Chevra Kadisha where she's been actively involved for three years.

This article originally appeared in the New York Times 2005.

The new anthology "Everyone's Got a Story – 41 short stories from a new generation of Jewish writers," edited and compiled by Ruchama Feuerman, is now available for purchase. The stories are drawn from her students who have taken her workshops over the years. The anthology also includes Mrs. Feuerman's writing essays and creative exercises to unlock the story within everyone. Click here to order.

The Journey of the Convert

How Shabbat Saved a Girl from the Triangle Factory Fire

Mammogram: My Fear of Cancer and Learning to Trust in God
Live Abortion Panel
Morality and Abortion: Three Views
There Are No Limits
Comments