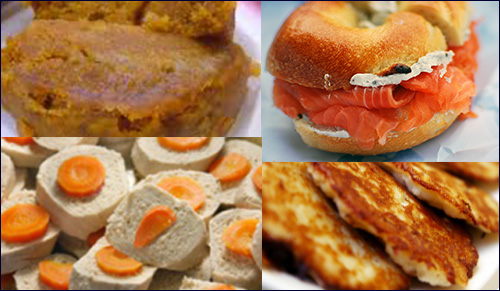 What do your Jewish food preferences say about you?

As a therapist as well as writer, I can say with great authority, I have absolutely no evidence whatsoever that our preferences in food tell us something about our personalities. But, as a Jew, I go with my gut. Trust me, there’s a connection.

A blintz person is full of secrets, hiding things in the secret compartments of their life.

For example, I hate bananas. I like banana flavoring, banana pops, and banana cake. It’s just the fruit I can’t stand. Now, why should a sane but quirky person hate an innocent yellow hanging food? Simple. It’s suffering an identity crises. Instead of quenching my lust for some juicy liquid, it’s mushy. This is a fruit? No. Watermelon is a fruit. A cling peach, even a pear – juicy. But a banana, especially with the strings hanging? Before you accuse me of OCD, I admit. I’m messy, but organized. The thing is, as life is filled with enough “Tsouris Surprises,” I need fruit to surprise me? Have you ever bitten into a plum or pineapple, expecting succulent and sweet, then suddenly your eyebrows stand at right angles? I’ve also had enough with false labeling, hoping things (and people) are what they seem to be. The banana isn’t.

I have a similar problem with beets. It’s a root that should be a fruit, which means I also dislike borscht, but that’s another story. Now, I could wait for whatever government agency is in charge of naming to get it right. After all, do we care if a tomato is a fruit or veggie? But, we’ll upset the World Order, and worse, tick off a government agency.

In the interest of confounding our understanding of human nature even further, I present you with my list of what I believe our food preference say about us!

What Your Jewish Food Preferences Say About You

1-If you’re a CHOPPED LIVER PERSON:

Chances are you’re gregarious, out-going, and show up at Bar Mitzvahs – even of people you don’t know. Nothing pleases you more than chowing down a little liver on a Ritz topped off by a perfectly round onion – and chatting with everyone. You can also be a noodge. As, face it, while it’s Jewish pate, our presentation could turn off, say, a Gentile. This you have no patience for, and might follow them around saying “Just try it! A bite!” which will make people run from you – along with your liver breath.

2-If you’re a HERRING PERSON:

This depends upon whether you like your herring with or without sour cream. If you’re a pickled herring person you’re probably a purist, no-nonsense pragmatist with maybe a little bite. You have no patience for fusses or musses, in your herring, or in your life. Should someone you love, God forbid, have a problem, you’re the one who says: “You’re over-reacting!” which also means, you’re probably not too popular. If, however, you’re a sour cream herring lover, you can handle even the most difficult tsouris – by covering the situation with a little butterfat. For example, should your nephew want to study professional surfing, you’ll tell your sister, “Listen mamala? At least he’ll get a tan.” Should you be a person who uses the original herring or adds mayonnaise – you’re a Gentile.

3-If you’re a LATKE PERSON:

If you eat latkes a lot all year round, mamalas, not only are you probably a bissel zaftig, but chances are, ambition may not be first on your “to-do” list. You may have a tendency to lie there, and a little dripping could be involved. If you’re married for example, your mate might hock you to put in for head shoe salesman, but you’re happy not having to do inventory. You could also be addicted to shmaltz – in your food, and in your feelings. Sentimental you are, which could make you the family historian, the one who keeps photos of the great-bubbes or zaydes when they were kinder in Kielce, and while watching your cousin’s video of her in front of the Wailing Wall, you’re the one wailing.

Like the original stuffed derma, you like your Kishke to be made from true kishke – and you feel “the false” down to your kishkes. More, you have no taste for the tasteless. As with kishkes which must be cased in a cow’s intestine not some synthetic, in life, the artificial gives you acid reflux. Unmasking phonies may mean your family and colleagues either respect you, fear you, or “forget” your invitation to the Purim party. While you’re sensitive and this may hurt you, nu, what can you do? You can’t help but call it as you see it or risk being on a permanent Gaviscon IV. The good news is, Grand Juries, adore you. More, when you’re in your element, say an authentic group of aliens, you’re the life of the party.

5. If you’re a CHAZZERAI PERSON:

Focus is not your thing. The opposite of the KISHKE PERSON, you live for junk – in your food, and in your life, where chances are your stuff is so scattered, Sherlock couldn’t find your tax return. Bargains – any bargain gives you such a high, you feel like dancing a Hora on the Brooklyn Bridge, scarfing down potato chip pizza. So the used sofa on Craig’s List is missing a leg, but you like the stripe. You’ll get it fixed you tell your mate --which you won’t. No. It will lean there until the coming of the Messiah, along with the vintage Pinto you got – without a cylinder, and the clothes that fit no one that are hanging on the exercise bike that you bought in that new thrift shop which you never use. Chances are your “collections” are making your mate chalosh, which only worsens your depression, triggered by the fact that your brain has morphed into shmaltz.

6- If you’re a KNISH or BLINTZ PERSON:

You love a mystery! Chances are you’re a “hider.” You have “secret compartments” everywhere, and like George on Seinfeld, if one looked under your desk you’d have a whole world you could live on in case of God forbid, nuclear war. Ah, but you also like the unknown! A sour apple makes you laugh. You delight for example, in saying to the blintz person when he asks what filling, “Surprise me!” and chances are, you collect things like Pez dispensers or Russian nesting dolls.

With this new insight, I welcome any additions, subtractions or multiplications … feel free to join my JEWISH FOOD PERSONALITY movement as a critical adjunct to understanding Jewish behavior!

Can You Keep a Secret?
Vayelech 5783: Regret and Repent
Rabbi Sacks: Focus On the Important, Not the Urgent
Put Your Foot Down: Are Human Feet Poorly Designed?
Comments
MOST POPULAR IN Jewlarious
Our privacy policy
Aish.com Is Looking for Great Writers