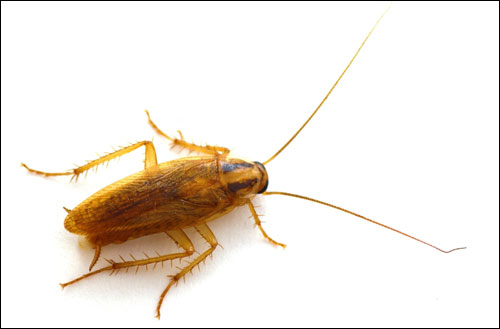 An encounter with a nasty cockroach had me preparing for Rosh Hashanah.

I am by nature a “don’t wake me up unless the world is coming to an end and you want to say goodbye” kind of guy. I am severely allergic to early wake-up calls and break out in a very nasty reaction if woken up too early in the morning, particularly at 5:30 in the morning, except when a cockroach the size of a house struts across the bedroom floor accidentally knocking over a dresser. That gets me out of bed pretty quickly, depending on the size of the dresser. I also get out of bed somewhat quickly when my wife spots a roach as tall as a skyscraper, taking a shower in our bathroom. That shower is reserved for us parents. Everyone else must use the shower in the kid’s bathroom, no exceptions.

My wife’s muffled screams filtered through the pillow. Mental note: invest in a new pillow.

When I heard the HISAMERWS (Help I Spotted a Man Eating Roach Warning System) go off this morning, I quickly swung into action, pulling the pillow tightly over my ears to drown out the annoying shrieks. I guess they don’t make pillows like they used to because my wife’s hysteria, though somewhat muffled, filtered through. I made a mental note to invest in a better pillow. Sometimes it pays to spend a little more. Intuitively sensing that this roach might be too big for my wife to handle, I slowly jumped out of bed and grabbed my roach busting gear. I yanked open the bathroom door and spotted the roach immediately—it’s kind of hard to miss a roach lathering with your expensive fresh blueberry scent shampoo with aloe. Acting cool and collected under the immense pressure, I did the first logical thing that came to mind. I gave the roach a name. Charlie – “Charlie Roach” sounded perfect. He certainly wasn’t any “Peewee.” Know your enemy was my philosophy. Then squish him.

Armed with a toilet plunger and a piece of cardboard, dressed in my striped combat pj’s, I fearlessly went into battle. It was just me and Charlie. Only one of us would emerge from that bathroom intact. Listening to the sounds of thrashing, crashing and bashing emanating from the bathroom, my wife was not sure who would carry out whom. Neither was I. The words filtering out of that bathroom were horrible. Boy did that roach have a filthy mouth.

If there is one thing that can be said about me, it is that I am more stubborn than a roach. I finally emerged victoriously from that bathroom holding the cardboard tightly over the plunger, with Charlie trapped inside, alive. How could I squish someone with whom I was on first name basis? I carried Charlie to the window and flicked him out. He survived the plunge to the garden this time, but if I ever see that worthless, good for nothing roach’s ugly mug around my place again, a plunge to the garden will be the least of his worries. And the last.

After all the action I couldn’t fall asleep again. I got dressed and went to Shul, far earlier than usual. I couldn’t even remember when I had been this early last. I was greeted with the extra wide smiles of the regular “early birds.” It seemed to me that they were smiling just a tad too much, which set off my internal radar system. Those guys would do anything to get me to Shul on time; anything.

I eyed them all suspiciously. “So tell me,” I said. “Does the name Charlie mean anything to any of you by any chance?” I was met with totally blank stares, which really sent my radar indicators spinning. Sure, like they didn’t know what I was talking about.

At the end of shul they blew the shofar, our wake-up call to prepare for Rosh Hashanah during the month of Elul. WOW, two wake-up calls in one morning! The first one worked, I wondered if the second would be as effective. Who knows, maybe the first was sent to clue me in to the real wake-up call. Maybe the first one was right on time. The Lord works in mysterious ways.

So okay, I admit it. Perhaps the roach wasn’t totally useless, and perhaps he was here on a mission, but he’s still ugly. And if I ever catch that hideous creature using my shampoo again, wake-up call or no wake-up call, he is cockroach history.

Buzz Off
Saadiah Gaon, Rashi and Maimonides: How Three Rabbis Revolutionized Judaism
King Sennacherib and the Siege of Lachish
Three Small and Easy Changes to Add Positivity in Your Home
Comments
MOST POPULAR IN Jewlarious
Our privacy policy
Aish.com Is Looking for Great Writers