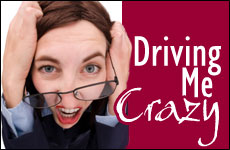 When my kids drive me, they drive me crazy.

My son’s flight will take off in two hours, whether he’s on board or not. True to form, he is still hurling his luggage and several enormous volumes of Talmud into the car a half-hour after we had agreed to leave for the airport.

I roll my eyes, buckle my seatbelt, and hold on for dear life.

I am exasperated. “We need to go!” I implore him. I hate cutting it so close, because in L.A., it is always rush hour and we have come perilously close to missing flights before. Come to think of it, “rush hour” is a ludicrous term to describe a situation where millions of cars are rubbernecking on the roads as far as the eye can see. The only way you can rush anywhere under these conditions is if you ditch your car and start jogging to your destination. A good time to drive in this city is between the hours of 1 a.m. and 4:30 a.m., when traffic is not as congested and you can watch city workers wearing blindingly orange vests shave off the sides of the Santa Monica Mountains to make room for the additional freeway lanes we needed thirty years ago.

I am about to slide into the driver’s seat when my son beats me to it. He starts the engine and is already backing out of the driveway while I’m still arranging the right half of my body in the passenger seat. He tricked me again. He knows I wanted to drive to the airport, especially since I have to drop him off in a no-parking zone where the cops have zero tolerance for even thirty-second stops. But when I ask him why he insisted on driving, Mr. Let’s-Pack-for-Yeshiva-One- Hour-Before-We-Have-to-Leave has the chutzpah to say, “I want to make sure we get there in time.” I roll my eyes, buckle my seatbelt, and hold on for dear life.

Don’t misunderstand: My four kids take the Fifth Commandment to honor their father and me very seriously. In general, they are highly respectful, but when it comes to my driving, I take a lot of abuse. In the warped way they view the situation, they think they are all superior drivers to me. Of course, this is laughable. I, and I alone, am the best driver in this family. Sure, my car has dozens of scrapes, as well as a huge indented pocket where it looks like King Kong put his fist into the right side rear bumper. Those are not my fault. Those are the battle scars from the kids each having learned to drive in this battle-weary vehicle. Both the car and I deserve Purple Hearts.

It is uncanny that the very traits and habits that prove my vast driving dominance are the very same traits and habits that convince the rest of the family that I am an inferior pilot. For starters, I keep my hands in the “10 o’clock-2 o’clock” position on the steering wheel. It made sense when I learned it in Driver’s Ed more than thirty years ago and it still makes sense now. I also do not view yellow lights the same way that race car drivers view the little flag that tells them to floor it. I wisely slow down at yellow lights and wait patiently for the next green light. Worst of all (to them), I scrupulously obey speed limits, even on a Sunday on a wide open road. All these things drive my kids wild.

But their suffering is nothing compared to mine. On occasions when they usurp my role as Main Cabbie and I am trapped as a passenger, my left eyelid begins to twitch in anticipation of the offenses they are about to commit. One will dangle his left arm outside the window, leaving only one hand cavalierly on the wheel. Instead of keeping a consistently steady, conservative pressure on the gas pedal as I do, another kid jabs the pedal spasmodically, lurching other passengers forward and inducing nausea. All of them find lane-switching an irresistible competitive sport. Most of them consider speed limits as suggestions only.

While I am clearly the best driver in the family, I am also the worst passenger.

I am modest enough to admit that while I am clearly the best driver in the family, I am also the worst passenger. It is remarkable that any one of them wants to drive if I am in the car, yet their youthful exuberance makes them want to do so regardless of my theatrics: I am likely to gasp in fear, jump from my seat, shout instructions and issue other manic corrections at the way my family members drive. I quickly become a nervous wreck, the worst stereotype of a Jewish mother. On a happier note, I benefit physically when my abdominal muscles tighten like marble due to my fear of their freeway flying. In my entire life I’ll never be able to do as many sit-ups as it would take to get the same effect.

I often promise to behave myself and to stay calm when others drive, but I usually fail the test.

“You’re too close to that car!” I shriek, involuntarily throwing my body leftward toward the driver’s seat, palpably fearful of getting nicked by the parked cars we are whizzing by.

“I’m not too close!” the driver will retort. “Relax, Mom. You’re tearing the leather out of the armrest.” Honestly, these kids can hardly remember to close the refrigerator door, so I’m not convinced they ought to be entrusted with commanding a 3,000 pound vehicle. Why isn’t the minimum driving age 25, or better yet, 30?

“Slow down!” I shout, even though, in fairness, he had plenty of time to stop at the red light. Did he see it was a red?

I did not intentionally become this obnoxious a passenger just so that everyone else would usually resign themselves to completely lawful excursions with me at the wheel. Still, I am happy that this unintended Mama Maneuver has succeeded so brilliantly. Let them plug themselves into their iPods and take naps. Let them be spared the sight of watching me hug the road exactly at the lawful speed limit, use my turn signals scrupulously, wait patiently at yellow lights, and other ulcer-inducing irritants. As the Talmud says, “Life is so short we must move very slowly.”

Besides, if they really, truly believed I was such a lousy motorist, how do you explain the fact they all sleep so soundly when I’m the one driving?

How to Make Chanukah Religious Again
Saadiah Gaon, Rashi and Maimonides: How Three Rabbis Revolutionized Judaism
King Sennacherib and the Siege of Lachish
Three Small and Easy Changes to Add Positivity in Your Home
Comments