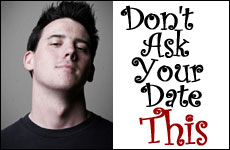 Questions you should never ask a potential Jewish mate.

It’s perhaps one of the Jewish people’s greatest ironies. How often have we heard the phrase, “Don’t ask!” spew from the lips of MOTs (Members of the Tribe) who not only ask about anything, any time, but make sure the question can be heard in Uruguay? What’s more, “Don’t ask!” often means, “Ask already!” Watch ...

On the other hand… “Don’t ask!” can also mean shouldn’t ask, ever -- especially when it involves Jewish dating and “potentials.” Obviously we need a little guidance here.

Don’t worry mein kinder. I am here and happy to help. As a public service, I now present you with: Don’t Ask! A Jewish Potential Mate: His and Hers.

1. “Don’t you think: we should talk about where this relationship is going?”

This is a bad question. It kicks off scary organ music, which will signal him to vault from a cliff, or more realistically, from the kosher Chinese restaurant. Much better to wait for him to ask how you want your rice. You reply: “Thrown.”

2. “How come it took you so long to call?  Am I going to have to wait another three days?!”

This question is okay if you two are already related. He’s used to it. But assuming he’s a prospective, you’re not. Which means that any mention of time and obligations will implant visions of you, “mama-fied” on bended knees sloshing linoleum cleaner, moaning “Oy. Not only does he track sneaker shmutz, he doesn’t call!”  In which case you’ll be “waiting” a lot longer.

This starts a dangerous precedent. He may actually expect you’ll believe he can’t make that 6-inch underwear-to-laundry hamper toss after you’re married. Unless you enjoy picking up T-s, in the words of our Grand-bubbes, “Don’t ask.”

Apart from the possibility that he’ll agree (“You’re right, hon. I don’t deserve to know”),

you risk “A.I.” or “Aggravation Inflation.”  This is a con-Jewnital condition, that causes some of our Tribe to retain aggravation, much as we do “bloat” from belly lox. Trust me. By the time he guesses, you’ll splat like the Hindenburg, and not fit into your wedding dress.

He will.  Telling him: “Your brother’s a chazzer (pig)!” no matter how constructive, will be unappreciated.  And who is he going to listen to? You, or the chazzer?  Much better to show rather than tell. Next time he does something in need of criticism take a picture of the infraction, post it on Facebook, then tag him so he can discuss it with his buds ... and his brother, the chazzer.

A remark like this will give her the impression you’re not interested in what Kyle said to Camille on The Real Housewives of Beverly Hills.   Remember! To most females, getting to the point, is the point.  Far better to adapt the “BFS” or “Basic Frozen Smile” while thinking of more important things such as your golf score, or whether your brother, who’s taking 90% of your gross, is a thief or just a chazzer.

2. “Aren’t you generalizing?” or alternatively: “over-reacting?”

The Jewish female never generalizes or over-reacts. She reacts only after carefully ascertaining that as “it” happened to somebody, somewhere, why not her? Support her ability to prophesize and prepare for any eventuality by saying, for example: “Good thinking, sweetheart!  After what happened to Noah, a water-proof chuppah does make sense in the desert!”

Such a direct suggestion-by-question implies that you think your mother knows more about: what you like, or what you should like than your intended.  More, that you want mama involved. Of course this is not true. But this innocent remark may lead to messy misunderstandings.

4. “If you want, with a little work you could firm those abs right up?”

This query falls into the category of “Dumb Responses to Metaphorical Comments” or the transliterative, “Drumkop!” She mentions her abs are bissel fat, her hair is shmutzig, her weight is bordering on zaftig, take note. These are not invitations for you to suggest-by-question! Practice this standard response. “No, they (you/it) aren’t (isn’t/will never be)!”

5. “Don’t you think your allergies are all in your mind?”

Take heed. Whether she’s allergic to soy milk, her Spanx, or your iPhone, nothing is “all in her mind.” She’s traced back and authenticated 3,000 years of “bad” noses in her lineage. Accept that your children, should you have them together, will also have “bad noses.” Look to her emotional relationship with her allergist as a source of constant inspiration; a state you may achieve after meeting 30 pollen seasons with green tea and sympathy, never once asking: “Is it all in your mind?”

So there you have it. Five questions you should never ask a prospective mate!  Should you feel any of the above about to spew forth, put two lemons in your mouth, and call me in the morning!

Baby Boomer-angs
What Makes Eli Run?
The Tyranny of Materialism
Science Enters the Mysterious Inner World of Consciousness
Comments
MOST POPULAR IN Jewlarious
Our privacy policy

What Makes Eli Run?
The Tyranny of Materialism
Science Enters the Mysterious Inner World of Consciousness
BBQ Bourbon Cheese Kugel Recipe
Korach 5782: Visit to Lift the Spirit
That Time The Ivy League Found A Way To Limit Jewish Enrollment
Would You Rather Be Right or Happy?
Korach’s Unique Punishment
Who Was Josephus? The Controversial Backstory of the Famed Historian
Should I Break Up, Get Engaged or Keep Dating?
1 2 3 … 2,944 Next »