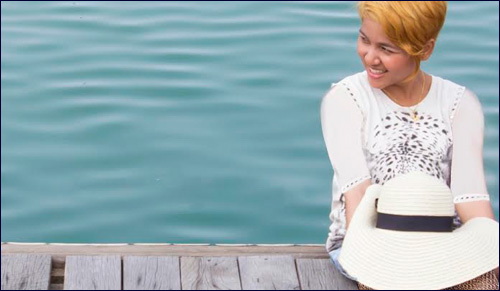 How a random encounter with a French Canadian woman in Atlantic City changed my life.

In retrospect, what a beautiful French Canadian woman said to me on the Atlantic City Boardwalk many, many summers ago should have made perfect sense. But at the time, it threw me for a loop. “Alan, what religion...you?” she asked, with fractured syntax but clear intent.

I was unattached, living the dream of a writer in that city by the sea, thrilled by what I was discovering by my words on paper and less than happy by my failure to make connections with people in the real world. I certainly wasn’t thinking about religion. Yes, I was Jewish, but since my Bar Mitzvah a decade ago I had rarely stepped inside a synagogue.

Only hours before that question about religion, I was sitting in the lobby of a fancy hotel watching a baseball game on a television that my small boarding house type establishment didn’t provide.

Suddenly, the game was drowned out by the sweet sound of young ladies laughing and speaking French. I looked up and saw these ladies walking through the lobby and out the door, no doubt excited by what awaited them. I was surprised to see that one of them had stayed behind, and she looked so lonely, like the rest of the ladies had abandoned her.

No one deserves to be alone. I was painfully aware of that myself.

I walked over to her smiling, and she smiled back. A connection that I so very much wanted appeared to be in the offing.

“Are you new to Atlantic City?” I asked.

Her face screwed up in consternation. She was struggling to make some sense of what I had said.

I motioned with my arm that she should come with me out the door and that I would show her around. “Please,” I said smiling, and her smile met mine in the sweetest connection I had known since I had come to Atlantic City a month ago.

As I showed her the sights, we got to know each other a little better. I asked her name and when she said it was Joanne, I told her that I had a friend named Joanne back home and that I had bought her flowers for her birthday.

“Bought?” she said, concentrating hard. “I buy. He buys. He bought.”

And that’s the way the whole night went – me talking and her conjugating all my verbs. I was flattered. Unlike everyone else who seemed to be in a rush, she took the time to listen and cared about every word I said.

“Alan, what religion...you?” I was stunned. Where did that come from?

I took her on rides at amusement piers, I bought her an ice cream, I helped her pick our postcards and we did all the things that people do in the excitement of having first met.

By now, it was late at night and I led her to a bench looking out at the ocean. We listened to the waves gently lapping to the nearby shore. I was at peace and I felt a real connection to her.

Then she asked that question: “Alan, what religion...you?”

I was stunned. Where did that come from? Just when everything was going so well.

What scared me was that I had to think – only a half second to be sure – before I could come up with the answer.

Gone was her smile. Her face screwed up in consternation.

“No understand,” she replied.

And then it hit me like a ton of bricks. Here I was feeling so connected to her and she didn’t even know the slightest thing about who I was. And what’s worse, I didn’t appear to know that much about it either.

Suddenly my connection to my Jewishness became very important to me. Here was a young lady from a distant small farm who had never heard of us and I was going to make sure that before we parted she would know who we were. I remembered something about how we’re supposed to be “a light unto the nations.” Well, now it was time for me to shine some of that light on her.

I conjured up every bit of learning that I could recall from my after-school rabbi who I went to for one year to learn my Bar Mitzvah parsha and whatever else he could get in.

I was telling Joanne, “You know, the people from Abraham, Isaac and Jacob!”

“We were slaves in Egypt. God sent Moses to lead us out. God brought ten plagues upon the Egyptians...you must have heard about us!”

I told her about the parting of the Red Sea, how we were saved and how the Egyptians drowned. I told her, with great joy in my heart, how God led us to Mount Sinai where we got the Ten Commandments.

Joanne just looked at me like I was speaking a foreign language, which of course I was.

“Oh well,” I said, conceding defeat. “I guess everyone hasn’t heard of us Hebrews.”

A flash of recognition flashed across her eyes. “Hebrews,” she said.

I held back my laugh and just smiled and she smiled back.

Through all of the verb tenses – past, present and future – I am a Jew.

Looking back at this many decades later, I see that Joanne’s non-sequitur question about religion made perfect sense. "He bring, He brung, He brew…" Through all of the verb tenses – past, present and future – I am a Jew.

Now married, religious and committed to living a Jewish life, I see how on that night God was watching over me, leading me away from connections that were not in my best interest toward deeper connections to myself and to my people, the Hebrews.

Alan Magill is a writer, humorist, playwright and photo/poem practitioner who has written for a number of Jewish and other publications and has found that truth is often more remarkable than fiction. Alan is the director of recreation at Ateret Avot Senior Home.

Can I Really Change the World?

From Buddha to Torah

The Courage to Search: How My Questions Led Me to Embrace Judaism

From Germany to Jerusalem
The Power Of Prayer
Va’etchanan 5782: A for Effort
Can You Show Me This "God?"
Comments
MOST POPULAR IN Spirituality
Our privacy policy
Aish.com Is Looking for Great Writers