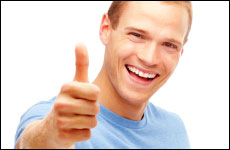 Brendan Marrocco lost all four limbs in Iraq. He has a lot to teach us about living with joy.

In 2009 Brendan Marrocco was injured by a roadside bomb in Iraq. He is the first soldier to survive losing all four limbs in the Iraq War. He was given prosthetic legs after he was wounded, but he hated not having arms.

In December, 2012 Brendan underwent a grueling, 13-hour surgery giving him new arms. Human nerves regenerate at a rate of an inch per month, so using his new arms will be a gradual process. But Brendan is looking forward to being able to drive again and wants to eventually be able to compete in a marathon using a hand cycle. "I just want to get the most out of these arms.”

"He's a young man with a tremendous amount of hope” Dr. Jamie Shores, the hospital's clinical director of hand transplantation said. “And he's stubborn, stubborn in a good way. He's not going to let anyone tell him he can't do something."

The Talmud says that “When the month of Adar arrives, we increase in joy" (Taanis 26b). The month of Adar, which begins this week, is a special time to access new levels of happiness in our lives. Brendan Marrocco can teach us crucial lessons in how to attain happiness.

1. Be happy now. We often view happiness as a future destination point. We'll be happy as soon we get promoted, get married, have a baby, buy a house, get tenure, make partner... But we are never as happy as we originally anticipated. We become caught up in a cycle of conditional happiness.

Happiness isn’t a happening; it’s an attitude. So be happy now, no matter how far you still have to go. Brendan had much cause for despair, but he chose to look at the positive. Despite his pain right after the operation, he kept his sense of humor. Brendan had a hoarse voice from the tube that was in his throat during the long surgery and realized he sounded like Al Pacino. So he started doing movie lines and making the nurses and everyone around him laugh. Don't wait for tomorrow to smile.

Live your life without regrets and focus on who you are today. Last year Brendan attended a Sept. 11 memorial with other disabled soldiers and he expressed that he has no regrets about his military service. "I wouldn't change it in any way. I'm still the same person."

3. Be grateful to others. Sometimes we forget the importance of connecting with others, forgetting to maintain friendships and nurture new ties. Sharing in others' celebrations and being there for them when times are hard is crucial for happiness. But even more essential for happiness is being able to express gratitude to others for the myriad ways that they give to us.

Brendan publicly thanked the donor's family for their precious gift of new arms. And he wishes that he could thank the deceased donor himself. "I am humbled by the gift. I want to say 'thank you.' He's the reason I'm alive."

4. Stretch. We often choose the path of least resistance. We think we'll be happier if we could just stay within our comfort zones. But challenging ourselves makes us not only stronger but happier too. Brendan first spent months learning to walk on prosthetic legs before the double arm transplant. He is anxious to use his new arms despite the pain, but the surgeons want him to take it slowly. "I suspect he will be using his arms for just about everything as we let him start trying to do more and more. Right now, we're the ones really kind of holding him back." According to the surgical team, Brendan’s constant pushing beyond his limits is the key to his recovery and optimism.

5. Feel blessed. It’s so easy to stop appreciating all the blessings in our lives. We focus on what we lack instead of what we have. Brendan shows us what it means to recognize abundance in our lives. "I feel great. I'm alive. I never really accepted the fact that I'd have arms. Now that I have them, it's almost like it never happened," said Brendan. "It's like I went back four years. I'm so happy."

If Brendan, who can still only partially use one of his transplanted arms, is so happy, what about us? That is the happiness challenge. To appreciate the gift of having arms, having legs, just being alive. It’s the Hebrew month of Adar, the month we increase our joy. Let’s embrace the challenge.

Anxiety: Living with the Crippling Effect of Endless Possibilities

Will Smith’s Apology
Is Grease the Word?
Dried Fruit Compote
Scientific Curiosity and the Divine Encounter
Comments
MOST POPULAR IN Spirituality
Our privacy policy
Aish.com Is Looking for Great Writers