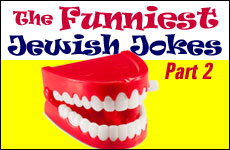 These classic jokes are quintessentially Jewish and put me into hysterics.

In Part One, I selected the funniest Jewish jokes I’ve heard, written, collected, and used in over 20 years of writing Jewish humor, along with a brief analysis of each.

Some you may know, others may be new, but all are: a) quintessentially Jewish; b) literally put me into hysterics – and still do; and c) are classics (or should be).

No such thing as Jewish humor?!

I challenge anyone who would dare say there’s “no such thing as ‘Jewish’ humor!” One comic I interviewed who became a star during his salad days doing Jewish “shtick” recently swore there was no difference between Red Skelton and Sid Caesar! Is he meshugge? What next? Jackie Mason and Ricky Gervais separated at birth?

So for you, dear readers, I bring you my absolute faves. Like that girl with the curl, when a Jewish joke is good it’s very very good and showcases our unique Jewish spirit, wit, and yes, often sarcastic brand of humor.

Tim and Lyle, walking down Main Street with Moshe, their boss, spied an oil lamp. With a rub, out popped a genie.

“You get one wish a piece,” said the genie.

Lyle shouted. “I want to be on a yacht in Bermuda!” Poof. He disappeared.

Moshe, the boss, looked around and calmly said. “For my wish ... I want those schnooks back in my office right after lunch!"

And so we have the difference between “them” and “us.” The two non-Jewish workers believed. The Jewish boss, like We Jews, was not only skeptical (a miracle not in a desert?) but delivered a delicious punch line differentiating “them” and “us.”

And while we’re on the subject …

Avram went into Church, took out his tallis, yarmulke, and proceeded to pray. The clergyman entered to start services: "Will all non-Christians please leave." Avram continued davening."

Again the clergyman said, "Will all non-Christians please leave."

Finally, the distraught clergyman moved to Avram. "Will ALL JEWS please leave."

At this, Avram removed his yarmulke, packed up his tallis, then went to the altar, picked up a statue of Jesus and said, "Come bubbela they don't want us here anymore."

Our ultimate joke about Jesus as a Jew. Could there be a better “them” and “us?” Some 50 years ago we Jews were often accused of Christ’s death until the Pope absolved us in the 1950s. Could there be a funnier or sharper way to respond?

A distinguished orthodox rabbi arrived in heaven and was greeted by an angel.

“Rabbi, we’ve prepared a special feast in your honor, with the best meats, fish and cakes.”

“Who may I ask, prepared the meat?” asked the Rabbi.

”And who is the Mashgiach?”

“Why, God himself,” replied the angel.

“Thanks very much,” said the Rabbi, “but I’ll just stick with the fish.”

We Jews have been known to be determined and independent when it comes to beliefs, traditions, and making sure everything is “kosher.” What can we say – we take our kosher food seriously. There’s nothing non kosher about that.

When Izydor Epstein from Poland applied for an American driver's license he was asked to read the eye chart. The clerk pointed to the first line with the letters “P O W Z Y N S K E Y.”

"Read it?" replied Izydor, "the man used to be my next-door neighbor!”

Simple, yet funny, in a few lines, we’ve told the world about our complex roots. And while it’s possible his neighbor (God forbid) is now calling himself “Polson” it reminds us of where we’ve been.

Is It My Business?

Mendel was on a ship emigrating from Russia to America. The second day, a huge storm erupted. People screamed and chairs went flying. Yet Mendel calmly read his book.

“Mendel!” yelled a fellow passenger. “How can you sit there when the ship may be sinking?!”

“What’s to get excited?” answered Mendel. “The ship belongs to me?”

Another joke only We Jews would understand, after years of the Diaspora, caring for ourselves in the face of prejudice, we’ve learned, like the saying: “Is it good for the Jews?” Or me?

Sheld’n visited mama and papa. He said: “Finally, I’ve found my bashert. Just for fun, I'm going to bring over three women and you guess which is “the one.” Mama and Papa agreed.

The next day he brought three beautiful women who sat on the sofa and chatted with Mama and Papa over a little cake. After they left, he challenged, "Okay, Guess which one I'm going to marry?"

“The one in the middle with the red hair,” his parents replied instantly.

I’ve had controversial reactions on this one from at least one rebbetzin I know. Is it anti-feminist? Oh yeah. Is it funny? Oh yeah. I admit it works the stereotype of Jewish parents and children, but to my thinking, humor has few boundaries … and this, to me, this is still funny.

During one service in a wealthy synagogue, the rabbi got carried away. Falling on hands

and knees, forehead to floor, he said, "Oh God, before thee I am nothing.”

The Cantor, not to be outdone, also got down, forehead to wood and said, "Oh God,

before thee I am nothing."

Seeing this, Levy, a tailor in the fourth row, left his seat, fell to his knees, forehead to floor and he too, said "Oh God, before thee I am nothing.”

With this, the Cantor elbowed the rabbi and sniffed: "Look who thinks he's nothing!"

We Jews have been known to make fun of our special “types.” This joke makes fun of “alrightniks,” and is a classic.

New Jewlarious Blog #2
The Miami Boys Choir is Taking over TikTok
Caramelized Onion and Pumpkin Pirozhki
For Every Individual, A Torah Scroll
Comments
MOST POPULAR IN Jewlarious
Our privacy policy
Aish.com Is Looking for Great Writers