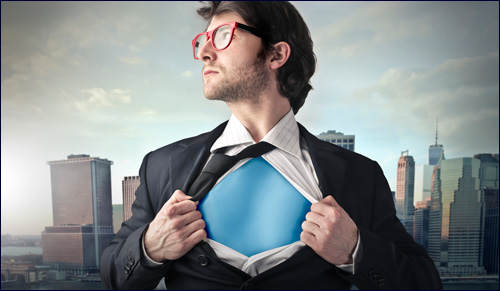 Who needs a polygraph when you have the Emmesonator!

We Jews have long had more than a nodding acquaintance with superheroes such as Superman, Batman, The Thing. And despite new and daring abilities like futzing with energy and maybe even the power to lead all computers to one insurance company, most of us are still hooked on the usual: flight, speed, strength, and the ability to turn Miami into an Arctic wasteland. But, as usual, could there, might there be superpowers that would fit nicely into our Jewish kops?

So today, I present four nifty JEWPOWERS that I know in my kishkes exist – somewhere.

Description: Faster than a polygraph! More powerful than sodium pentothal! Able to leap tall tales with a single twitch! It’s the Emmesonator! This remarkable superpower, Emmesneses, forces those around you to tell the emmes; the absolute truth! With a combo blink-twitch, the emmes will spill like Niagara – even in mid-sentence. Listen …

The Emmesonator: “So Harvey, you’re an hour late. Where were you?”

Harvey: “Oy, the bus? You couldn’t get a sardine in there so I had to wait – (The Emmesonator blink-twitches) … to win back the $100 I lost in the Poker game to that gonif, Meyer. Ha! Not only did I win back, I also made a profit I was going to spend on a present you’d love – (blink-twitch) … for myself! Yes. Another golf trip with the boys to Miami. All for me!

Ancillary Powers/Benefits/Issues: Picture it. Your son asks for the car to attend a seminar? Blink-twitch. NAMED JUDI. Another unusual aspect of the Emmesonator is the answer “Fantastic” to the question: “How are you?”

Famous Jewish Emmesonators: Yitzak J. Feinberger, an unsung fruit man in Fairfax, Virginia, saw young George Washington hock away at a cherry tree with such delight. “Young man,” said Yitzak, putting his cart down, “What’s with the hatchet and the hocking?” Six-year-old George, said … “Ye nice Jew fruit person are mistaken. I was … prun-.” As legend has it, Yitzak blink-twitched at George who stopped and said … “playing. I cannot tell a lie, and now I shall tell papa.”

Description: With laser-like focus, the Toyshnik can change, alter, add, and re-arrange body parts. All it takes is a mental image and BOOM! Just imagine. You can, for example:

Ancillary Powers/Benefits/Issues: Warning from the J-LOS (Jewish League of Superpowers): “Toyshnocity, or the power to maneuver body parts, includes restoration to the original state. In 5% of Toyshniks tested, however, there was some residual effect. Therefore, it is recommended that the Toyshnik use these powers wisely or risk ‘sticking’. For example, if you go belly up, you could eat your heart out or beat your brains out by accident.”

Famous Jewish Toyshniks: David, the young lad who slew the 10 foot narish-khaye, Goliath, was suspected when Saul turned to his wife and said … “With just a sling and a rock that boychik knocked that giant in the head?! Feh. I’m telling you, he turned himself into Behemoth!” She reportedly said: “Oy, now your jealousy is turning you into a Toyshnikaphobe?”

Description: The ability to stop others from communicating instantly. With one cross of an eye, not only does the SHAnamator have the power to stop the shmendrick, the vilda chaya, the yenta in mid-yutzery, but forces the offender to make nice. Listen …

A Yenta: “When I saw your daughter in that outfit, I said ‘Miriam! You look just like a – (SHAnamator looks at her cross-eyed) … ripe piece fruit.’ Here darling, take my Harry & David pear … my last one for a whole season.”

Famous Jewish SHAnamators: ShanaMaydel. Few people know she was, in reality, the wife of Moses, who Sha’d the unruly Sinai crowd so her husband could get in Ten Sentences without interruption.

Description: No doubt the most common unknown Jewperpower, the Fliegeleptic can flap and trace the nearest chicken or its parts with uncanny accuracy. Why is this important? Listen. A certain Mrs. Flickenhiner was in Angola last year. Now, Angolans stopped importing fowl from the U.S. because of their fear we’re poisoning them. OK, true, a few bad cluckers had gotten through. Yet not one Jew she ever knew got a deadly flu from a pulke or a pupik! Two weeks later her Marvin was chaloshing from fowl-deprivation. She decided enough was enough, flapped her arms, and there she saw it! A perfect roast chicken smuggled by the one Jewish family of Luanda. They paid a visit … on a Friday … at sundown. Turns out the balaboste was also a Fliegeleptic! What are the chances?

Ancillary Powers/Benefits/Issues: In a strong wind, if her hat or sheitel has long bangs or scarfs, the Fliegeleptic could take off – toward the chicken – should she flap hard enough.

Famous Jewish Fliegeleptics: Golde of Anatevka, wife of Tevye. In that underfed, overworked tumble-down town, who do you think supplied all the chickens in the Sabbath scene? Yenta the Matchmaker spread the word that Golde was actually THE GOLDEN CLUCKER.