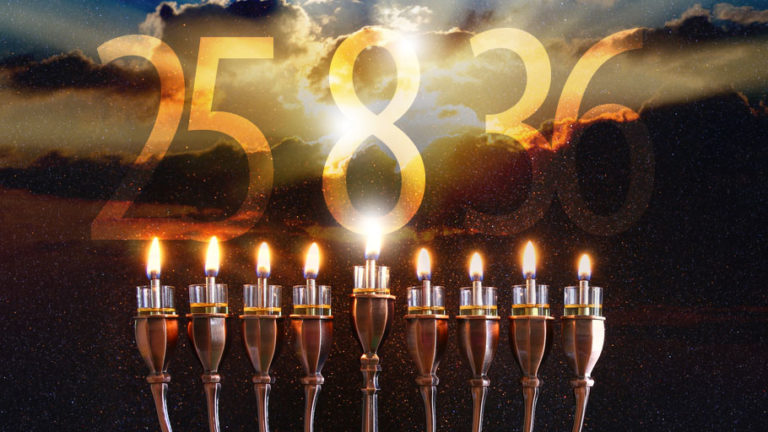 Hanukkah: it’s all in the numbers.

There are certain numbers which are strikingly conspicuous during Hanukkah. They are not there by chance. They contain important symbolisms which help us understand what the holiday is all about.

Eight is of course the all-pervasive number of Hanukkah. Let’s look at a few examples and discuss their significance.

In Jewish thought, the numbers 6, 7 and 8 represent a progression. Six stands for the physical universe. It corresponds to the four directions – north, south, east, and west – together with up and down.

Seven represents holiness – the non-physical element of the universe. Shabbat is the seventh day of the week, the day on which God “rested” and no longer needed to add to the physical world. It reflects that the world is not only a physical entity, but houses spirituality within it.

Eight is the number beyond this, and so, represents transcending the physical universe. A baby is circumcised on the eighth day symbolizing that the Jewish people are not merely creatures of the physical world, dedicated to its pleasures. We devote ourselves to something higher. Likewise in the Temple we serve a transcendent God.

The battle between the Seleucid-Greeks and the Jews revolved around this number. The Hellenistic culture was well ahead of its time in its appreciation of all things beautiful – art, architecture, sports, poetry, philosophy, rhetoric, etc. But for the most part, their admiration extended no further than the physical – beautiful bodies, sports achievements, massive coliseums, scientific endeavor, development of the human intellect. Even their gods were no more than human supermen, possessing all the pettiness and jealousies of ordinary man.

The Greeks likewise tolerated Jewish culture and even our beautiful Temple – which they never sought to destroy. But they could not countenance performing Temple service to an infinite, incorporeal God or the mutilation of the human body via circumcision. To them, religion served to enhance and dignify man’s physical well-being, not to submit himself to a higher purpose. Circumcision was thus forbidden, and the Temple service could only be performed to the physical Greek deities.

When the Maccabees stood up for Jewish religion and values, it was a battle of eight. The Greeks, for all their cultural advancement, lived for the physical world. The pious Jews recognized that Hellenism, in all its beauty, was superficial and dead. And they stood for something higher, for a religion which requires us to reach beyond the physical world and connect to the infinite – the realm of eight. They thus went beyond their natural physical limitations in taking on the most advanced army of the ancient world. And God rewarded them in kind – with olive oil which exceeded its own physical bounds to burn for eight days.

The next most significant number of the holiday is 25. Let’s look at a few of those:

This value contains some of the deepest allusions of Hanukkah. Let’s look at a few of them:

Thirty six thus represents the deeper aspects to the Torah and universe – the Talmud and the wisdom of Kabbalah, and the divine light with which we can comprehend the infinite. When we light the Hanukkah candles, we receive the slightest glimmer of the original holy light of creation. Pious Jews throughout the ages would do nothing but gaze at their Hanukkah lights, drinking up their holy glow. Hanukkah too grants us the opportunity to perceive the light of God’s wisdom like no other time.

A happy Hanukkah all!

The Nature of Nature
The Promise Of The Land
Which Chat Are You On?: Parshas Behar/Lag Ba’Omer
Do You Like Slow-Cooked Food? Thank the Jews
Comments
MOST POPULAR IN Deeper Themes
Our privacy policy