The Emergency Call & the Anti-Semite 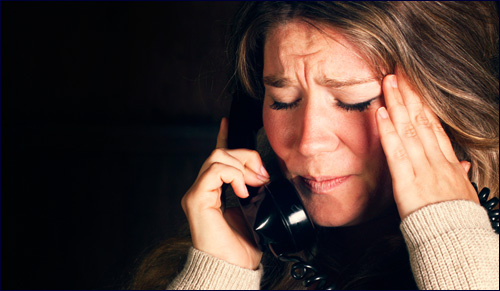 What does it take for a person to rethink his prejudices?

My answering service seldom called me at home, so I assumed this was an emergency. The operator told me that a woman was on the line sobbing, sounding frightened, speaking with heavily accented English.

I am often contacted by individuals from Israel, from Hassidic communities and other places where English is a second language, when people are in crisis. The unsteady voice on the line was indeed a woman, sobbing, accented, and she indicated that she felt as if she was having a breakdown. She asked to see me immediately, and without doing my customary over-the-phone screening, I agreed to see her that morning.

She was somewhat of a celebrity, from a European country, on tour in California and apparently she was having acute attacks of panic. She had no prior mental health history, was quite successful in her field, but anxiety had gripped her a few days earlier. It was no wonder that she felt that she was "breaking down." Between her tears and her shaking she could hardly catch her breath. I gave her instructions to slow down and calm her shuddering so that I could obtain more information.

She had been the victim of a beating prior to traveling by a man whom she knew. Her trip out West had been planned long ago so she had told no one about the trauma and had simply left on her travels. As the end of her trip was nearing and she was preparing to return to Europe, the panic hit her. She was afraid to go home but afraid to remain far away where she knew no one. When the anxiety mounted, she knew that she needed professional intervention and chose my name from the phone book.

I learned that her father was a famous physician with clinics around the country where they resided. She signed an authorization for me to bill her father, whom she had notified about her crisis. The treatment process was quite rapid and short, and by the end of two weeks she was in better shape, ready to return home. Some time later, I had my billing service prepare a bill which was sent to the father via my young patient.

Some weeks later a letter came to my office from the woman, thanking me again for helping her find clarity and composure. She was doing well. She acknowledged the bill which she had forwarded to her father. A few months then passed.

The call came in soon after, my patient again sobbing. "I made a mistake when I was telling papa about how much you helped me. I told him that you were a good man, and a Jew. He yelled at me and cursed you, and refuses to pay. I think I told you that my grandfathers were both officers in the army during the war. My father holds the same opinions. He will not change his mind. He hates....your people. I am sorry. I do not know what to do."

I did not know what to do either. The patient had accrued a debt with my office, and her father would not honor it. I could hardly hire a collection agency to go after the man. He lived thousands of miles away. I shrugged and tentatively said goodbye to that portion of my income. I knew that I had done the correct thing, providing treatment to a person in crisis.

About a year later, I received a long handwritten letter in passable English. The writer introduced herself as the mother of my patient... and the widow of that famous doctor. She wrote that her husband was a very experienced pilot. He flew his private plane from city to city where he ran clinics and lectured. He had set out one morning with a group of his friends for a short flight in his freshly serviced plane. For reasons inexplicable, the plane had crashed. He perished.

The next sentences chilled me. "I know that my late husband owed you money and refused to pay you because you are Jewish. He had been angry at our daughter for choosing to see you, and would not acknowledge that she had needed your help. I do know that she had been scared and sad and you helped her be happy again. I also know that the God of the Jews watches over your people. It is my belief that my husband died because he offended the God of the Jews by cursing you. Please tell me how much your bill is and I will have the payment wired to your bank. He left a very large estate and I can well afford it. I do not want more trouble after what happened to my husband. Thank you Dr. Fox and I bless your people."

What does it take for a person to rethink his prejudices? Is bigotry based on logic, so that it can be changed by reason? Or is it steeped in superstition and primitive ideas, so that it can only be tempered by greater superstition and more primitive thinking? It is helpful to examine our biases and our resentments, and to ponder what would need to happen for us to reconsider our petty dislikes and tainted perceptions.

Growing Up Catholic and My Grandmother’s Hidden Past

My Story of Sexual Abuse
For Every Individual, A Torah Scroll
Allegiance To The Monarch
Meet the Real You: Yom Kippur
Comments
MOST POPULAR IN Spirituality
Our privacy policy
Aish.com Is Looking for Great Writers