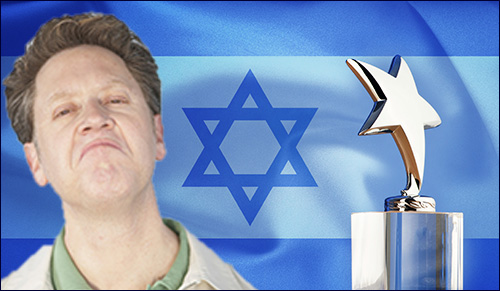 The news stories of 2014 that never made the headlines but speak volumes about the true flavor of Israeli society.

OK, so 2014 was not a good years for the Jews. Iran’s nuclear program continues. Trise of ISIS and of course the two-month war with the Palestinians that unleashed an outpouring of anti-Semitic venom. Why already in September 2014 even an Haaretz (!) columnist crowned the Jewish New Year 5774 “the year of blaming the Jews.”

The Chutzpah award goes to the Ramat Gan for giving parking tickets to cars pulled by the side of the road during the war in Gaza!

Are Israelis worried? Well, yes, but most continue to live life to the fullest through thick and thin. ‘How’ is reflected in the wildest and wackiest news stories hiding in the back pages of the Hebrew papers – the best of which are recognized annually in the Chelm Awards sponsored by the news outlet Chelm-on-the-Med Online, now in its 6th year.

The overwhelming percentage of Israelis – Jews, Druze and Arabs – continue to go about their lives despite ethnic and national tensions in the headlines, including this year’s recipient of the Israel Diversity Award – 43 year-old attorney-at-law Hamam Hleihel. The recipient is an Israeli Muslim born in an Arab village, originally married to a Greek woman who converted to Islam, now remarried to a divorced Christian immigrant from the former Soviet Union. The family (including a stepson who served in the IDF) lives in an Arab house in the Jewish capital of Mysticism – Tzfat, where Hleihel heads a law firm specializing in family law for Druze, Muslims, Christians and Jews…and if that’s not breathtaking enough, Hleihel himself is a renowned expert in Jewish family law who often serves as an advocate representing Jewish women in rabbinical courts.

The Quirkiest Municipality Award for 2014 was a toss up. Ramat HaSharon inaugurated special bicycle paths on the sidewalk that often ended abruptly in the bushes or went smack-dab into a bus shelter, but the award goes to Bnei Brak whose city elders approved a municipal budget with multiple pages printed in total gibberish due to a computer glitch…and nobody at city hall took noticed.

Who deserves the Award for Chutzpa? The winner for the most audacious conduct in 2014 in the corporate category is the Ramat Gan Municipality which during the July-August 2014 Protective Edge Campaign ticketed cars for illegal parking after they pulled over to the side of the road when sirens sounded warning an income Grad rocket and motorists hit the pavement. The prize in the indie category goes to a squatter who set up a house in a Tel-Aviv park to protest housing costs, then refused the Tel-Aviv Municipality’s offer of a weatherproof tent, charging city hall’s upgraded accommodations were totally inadequate because the tent was “too small to accommodate the couple’s double bed.”

The Chelm Award for Business Acumen belongs to Israeli District Court Judge Eitan Ornstein who approved issuance of an Appeal to the Public to help underwrite a civil lawsuit abroad by a trustee who needs 1.5 M in ‘venture capital’ to try and recover $50 M in the hands of a London partner of a bankrupt Israeli businessperson…in exchange for a cut in any money awarded by the British courts.

Who walked off with the Israeli Ingenuity Award? One runner up was ‘granny4rent’ a free matchmaking platform that allows unemployed/retired persons over 50 to find part-time work providing overextended working parents with someone responsible to fill-in for half a day as a warm and loving, proactive and supportive parental figure. So, who took the prize? Sarit Asharov, a Raanana manicurist who invested three years nailing down the reasons people bite their nails and published a book about how to stop for good. The secret? Like alcoholics and smokers – abstinence: Never never succumb to any contact between your teeth and your nails – not even one itty-bitty pinky finger or you’ll be re-hooked.

Chelm’s Honorable Menschen Award goes to residents of a small assisted living residence in Jerusalem called Tovei Ha’ir who banded together to collect money for typhoon victims in the Philippines; the recipients were homeless relatives of twenty-five Philippine caregivers who live with the residents. They share the prize with Jewish brethren from Beverly Hills who pressed into the hand of the conductor of the Haifa Symphony signed ‘open checks’ as donations, leaving it to the Symphony to fill in the sum… (Although deeply touched, the Haifa Foundation returned the checks untouched asking the generous angels to fill in a sum themselves.)

Breakthrough medical research this year found that the almost total absence of peanut allergies in Israel is linked to de-sensitizing sabras to peanuts from an early age by eating Israel’s most popular snack food: melt-in-your-mouth peanut-flavored Bamba, which brings up the 6th Chelm Awards’ Only-in-the-IDF Prize that belongs to an IDF conscript who is suing the Ministry of Defence demanding disabled veteran status for life. Why? The food available in boot camp, he claimed, failed to meet his special needs as a zealous vegetarian, complicating an existing medical condition due to avoidable stress, leading the soldier to fall into a depression and be discharged on psychiatric grounds. The chain of events was fuelled by “being forced to subsist solely on Bamba during his entire period at boot camp.”

Last but not least, the Chelm Awards for 2014 would not be complete without adding a special Blame the Jews Award for the most ‘original’ canard leveled at the Jewish state during 2014. Clearly, the most deserving demonizer is the United Nation’s High Commissioner for Human Rights Navi Pallay who charged Israel is guilty of war crimes against civilians of Gaza because it refuses to share its Iron Dome ballistic missile defense shield with the “governing authority of Gaza” – in other words - Hamas, the entity that was shooting rockets at Israel!

Daniella Ashkenazy is a seasoned bilingual Israeli journalist and founder of The Chelm Project, and Chelm-on-the-Med Online which will celebrate its 5th birthday this coming Purim, dedicated to transforming preconceptions about Israel – one chuckle at a time

My Life as a Jewish Cartoon
Were Adam and Eve Jewish?
How I Learned to Love the Multiverse
10 Big Jewish Inventions
Comments