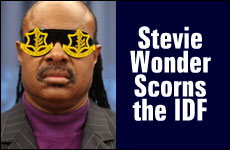 Pop star stands on the “wrong side” of history.

The latest salvo was fired by R&B sensation Stevie Wonder, who backed out of his commitment to perform at this week’s gala in Los Angeles to benefit the Friends of the Israel Defense Forces.

Friends of the IDF is an independent, non-political, non-profit organization that provides assistance to wounded Israeli soldiers, scholarships for those from poor families, and summer camps for widows and orphans of those killed in the line of duty.

Enter the BDS movement, whose sole purpose is to pressure entertainers and business people from having anything to do with the State of Israel.

It took only 3,600 signatures for Wonder to cancel his appearance.

In the case of Stevie Wonder, the pressure came in the form of an online petition that appealed on the basis of “humanitarian” grounds: Since Wonder opposed South African Apartheid, he must now oppose the IDF which, according to the petition, "promotes, enables, and protects Israel's Apartheid regime."

It took only 3,600 signatures for Wonder to cancel his appearance, on the thin pretext that it somehow conflicted with his ceremonial role as a U.N. "Messenger of Peace.”

If Wonder was a true ambassador of peace, he would have stood firm in support of an organization dedicated to assisting injured personnel and bereaved families.

Though Friends of the IDF has no connection to military activities, the media once again got the story wrong, posting headlines such as “Stevie Wonder Cancels Gig for Israeli Military” (The Times of London) and the widely circulated Associated Press report declaring that Wonder called off a concert “for a group that raises money for the Israeli military.”

The pressure against Wonder and other entertainers is nothing less than cultural terrorism. When ex-Beatle Paul McCartney insisted on performing in Israel despite pressure from pro-Palestinian activists, Islamist leader Omar Bakri Muhammad threatened:

“Paul McCartney is the enemy of every Muslim... If he values his life, Mr. McCartney must not come to Israel. He will not be safe there. The sacrifice operatives will be waiting for him.”

Many musicians have stood strong against this coercion. One group called Creative Community for Peace says that although we "may not all share the same politics, we do agree that unfairly singling out Israel, the only democracy in the Middle East, will not further peace."

Yet musicians such as Elvis Costello, the Pixies, Jon Bon Jovi and Carlos Santana have all cravenly cancelled tour stops in Israel.

Appearing in Tel Aviv, pop icon Elton John took a swipe at the cowards: "Musicians spread love and peace, and bring people together. We don't cherry-pick our conscience."

The BDS movement is patterned after that which brought down apartheid South Africa in the 1980s. Global activists – employing a combination of U.N. condemnations, diplomatic isolation, arms embargo, economic sanctions, and cultural boycott – created the perception of a regime that was illegitimate and immoral, to the point where world outrage caused its collapse.

In 1987, Ted Koppel went searching for "the next South Africa."

Today, the State of Israel has become the new target, the 21st century version of apartheid South Africa. It’s a canard that may have been invented by newsman Ted Koppel. In 1987, after producing a series of programs on South Africa's waning apartheid, Koppel went searching for "the next South Africa." He discovered Israel. As Koppel relates in his book, Nightline: History in the Making and the Making of Television, “The equivalent of Bishop Tutu versus Foreign Minister Botha would be the Palestinians versus the Israelis.”

Current efforts by the BDS movement include:

And now, little Stevie Wonder has joined the long list of public figures who have showed more cowardice than courage, and are now on record as standing on the wrong side of history.