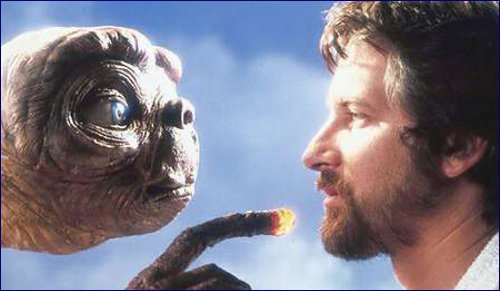 Teaching kids to take pride in their heritage.

Steven Spielberg spoke with the popular film website Moviepilot and opened up about his difficult childhood where he found himself constantly bullied. From an early age, Spielberg lived in fear of being looked at as different because he was Jewish.

“It isn’t something I enjoy admitting, but when I was seven, eight or nine years old, God forgive me, I was embarrassed because we were Orthodox Jews. I was embarrassed by the outward perception of my parents’ Jewish practices. In high school I got smacked and kicked around. Two bloody noses. It was horrible.”

When Spielberg was in Saratoga High School, kids would pass by him in the hall and sneeze “How-Jew”. After school he was again bullied frequently. Spielberg admits that he was ashamed of his Jewish name and all things Jewish. He has said in the past that because of the constant taunting, he “denied” his Judaism for a long time.

“I often told people my last name was German and not Jewish.”

“The Spielberg’s are dirty Jews.”

Spielberg’s mom, Leah, shared in a 2012 interview with 60 Minutes that the Spielberg’s lived in a non-Jewish neighborhood and folks would often yell out “The Spielberg’s are dirty Jews.”

In order to cope, young Spielberg created an imaginary friend – a compassionate alien.

“The friend could be the brother I never had and a father that I didn’t feel I had anymore.”

This imaginary alien friend became the inspiration behind the popular film E.T. the Extra Terrestrial. And Elliot, the child who finds E.T., is a mirror to Spielberg’s life as a boy.

“We would go from town to town and it would just happen. I would find a best friend, and I would finally become an insider at school and at the moment of my greatest comfort and tranquility move somewhere else. And the older I got the harder it got. And E.T. reflects a lot of that.”

Steven Spielberg’s boyhood story of being taunted is not unique. Every day thousands of children are afraid to go to school, get on the bus, sit down for lunch, or join their classmates at recess. Bullying affects kids of every age, all over the world. These children are mercilessly picked on over and over again. Bullies do not stop. They are relentless.

The children who are bullied can be taunted for the way they look, dress, speak, act, their race, home life, or like Steven Spielberg, their religion. No matter the reason behind the cruelty, the child who is being bullied grows fearful and loses self-confidence. While young children are encouraged to confide in a trusted adult like a teacher or parent, pre-teens and teens would be reluctant to bring someone else, especially an adult, into the picture. They are afraid of even more taunting: “So, you had to go to your mommy? What a baby you are!” Instead of sharing their pain, many of these children grow silent. They keep their anguish inside. Childhood becomes an emotional album of painful memories.

Experts advise parents to build a child’s self-esteem so that the bullying will not destroy feelings of self-worth. The better your child feels about himself, the less likely that the taunting will leave a child battling inner devastation. It is a good idea to encourage hobbies, extracurricular activities, healthy connections with others and friendships made outside of school. Relaying to your child what you love about him, as well as reinforcing his strengths and positive qualities, also build a child’s self-regard. Some children also need parents to role play and help them learn how to ignore the bully or use humor to get around the situation.

It is important to practice confidence, positive body language, and not give the bully the response he is looking for. Forming emotional intelligence skills allows children to learn needed life abilities for future experiences.

From Dirty Jew to Jewish Pride

When it comes to dealing with religious slurs it behooves us to give our children confidence in who they are. Sadly, many of our children will have to deal with taunts and smears denigrating Judaism. The world has only grown more anti-Semitic since Steven Spielberg was a boy. Though he is a remarkable example of one who rose above his fears of being different, and even learned to embrace his heritage publicly through his work, we are not guaranteed that our children will automatically do the same. What can we do to help our children grow with Jewish pride?

When called a “Jew,” instead of feeling shame, let’s make the child feels a surge of pride.

Knowledge is power. If we want our children to grow up feeling proud to be called a Jew then we must transmit to them a strong Jewish identity. That means that we stand strong in our own Jewish identity. We need to ask ourselves: what does being Jewish mean to me? How can I help my children connect to their heritage and love their legacy? Am I building Jewish memories for my children to recall as they grow up?

Home is the place where our children learn to really care about being Jewish. We celebrate Shabbos, light our menorahs, sit under the starry skies in our sukkahs and speak about the miracles of our nation Seder night at home. Children observe as we sing the Shema at bedtime, recite blessings, live with Torah morals as we honor our parents, invite guests and speak respectfully to one another. Our homes are our greatest classrooms. We cannot leave our children’s Jewish education to others –whether it be schools, teachers, synagogues or after school programs. The seeds must be planted at home, otherwise there are no roots to anchor our children.

When we help the next generation celebrate their Judaism, grow strong in their daily Jewish moments, learn more about their past so that they can successfully build their future, embrace mitzvot, we create a strong Jewish identity.

When called a “Jew,” instead of feeling shame, let’s make the child feels a surge of pride.