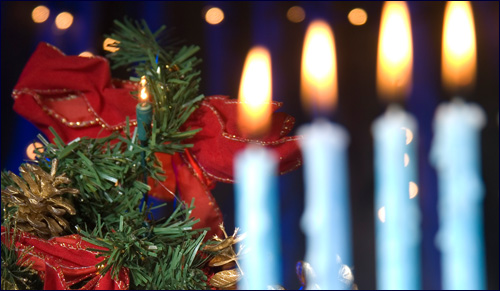 Growing up with a Christmas tree made me wish that I wasn't Jewish.

What's so bad about a Jewish family having a Christmas tree? It's beautiful, it smells good, and it's not religious! So what could be the harm?

My father was Catholic and my mom was Jewish, so they compromised – we had both a Hanukah menorah and an X-mas tree: the full package of lights, decorations, and wrapped presents.

The Christmas tree is 7-feet tall, with tinsel, glowing lights, pine smell and presents underneath. It's beautiful, happy, and – best of all – makes you fit in with everyone else in suburban America. The menorah? It's 8 inches high with wax candles that melt all over everything.

There's truly no competition. The Christmas tree won every time.

Year after year, my family defended the Christmas tree vigorously and vociferously. "It's not a religious thing," my family insisted. "It's just an excuse for us to get together!"

But it wasn't. The Christmas tree was a powerful, positive emotional experience. In the end, the annual celebration we held around that tree had a far greater lasting impact on me and my family than almost anything else we shared together.

That tree made me wish that I wasn't Jewish at all and that I was just like everyone else. So take it from me: Don't underestimate the power of the tree.

And here's the truth: Once a child has a Christmas tree, she'll want it next year, and the year after that. And when she gets engaged (to a Jew or not), she will want that fiancée to come to the family's "not religious" Christmas gathering. And who wouldn't want to share something so happy and beautiful? Later, she will want to bring her baby and then her child to experience that happy, beautiful gathering.

But then one day, years down the road, she'll sadly wonder why her child, and she, don't connect with being Jewish.

We are charged with the incredibly important task of raising children and of giving them a Jewish identity and values, not a mixed-up identity.

That's what almost happened with me. But thankfully (albeit with great difficulty) my then-fiancée (who happened to be Jewish) broke the chain. He saw the writing on the wall: the conflict, the confusion our children would experience, the assimilation and potential intermarriage we rightly would one day blame ourselves for. He said it's not right for us to celebrate ANYTHING with a tree.

That was so difficult for me. The holiday had been permanently imprinted upon me. Today is more than 20 years since my last family Christmas gala, and I still have emotional associations so strongly formed as a child.

As Jewish parents, we are charged with the incredibly important task of raising children and of giving them a Jewish identity and values, not a mixed-up identity. We want them to have positive associations with being who they are – Jewish children. We don't want them confused or longing to enjoy a different religion.

Ironically, Hanukkah is all about not assimilating into another culture. And truth be told, having a Christmas tree is doing exactly that! It's no coincidence that Christmas and Hanukkah often overlap. That fight to not assimilate is still going on today, with us and with our children. And every year we have a choice: do we celebrate being Jewish? Or do we celebrate moving away from our Judaism?

And yet even today people – fellow Jews – still ask me, "But a Christmas tree is so beautiful and it smells so good. What's the harm?"

The harm is that the draw of the tree – the beauty, the smell, the music, the happy gifts – can be more powerful than the draw of Jewish holidays, which are more meaningful and intellectually deep. Yet it's much easier for a kid to relate to the pageantry of Christmas and the thrill of a wonderful and magical Santa.

It pains me terribly to see my sister, the daughter of a Holocaust survivor, having huge celebrations with a tree at the center of it all.

As Hanukkah and Christmas approach, don't think that having a tree is "harmless." It's not. Or that "it doesn't mean anything." It does. It's a positive emotional memory that won't be erased, and they will want to share it with their kids.

Today, it pains me terribly to see my sister, the daughter of a Holocaust survivor, having huge celebrations with a tree at the center of it all.

Even more, it pains me that her daughter, now intermarried, feels closer to Christmas than to all the Jewish holidays combined.

It all starts with a tree.

Not So Modern Love

Why I Won’t be Observing Yom HaShoah this Year