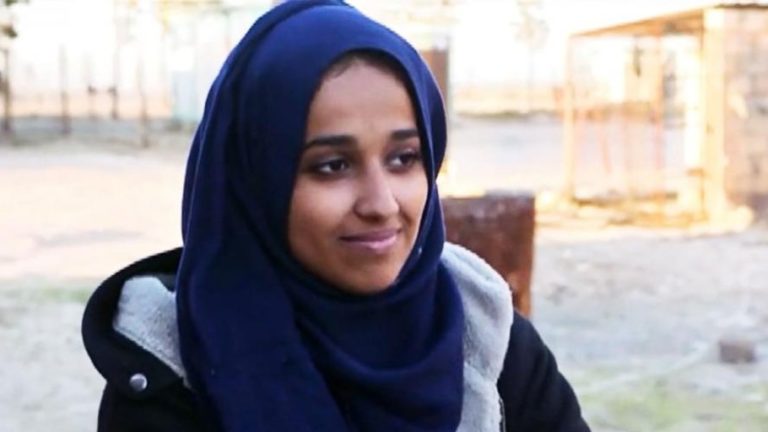 Mistakes should indeed be forgiven; crimes need to be punished.

Hoda Muthana is ready to admit now that she “made a big mistake.”

Five years ago – not a child but 24 years old – she left the United States surreptitiously to join ISIS and became a fervent disciple of the vicious and barbaric movement intent on world domination and preaching death to all infidels. She does not deny that with great joy she burned her American passport, married an ISIS fighter and took on another name, Umm Jihad, “mother of Jihad.”

With her new credentials she enthusiastically became her husband’s partner by way of the twitter battlefield. She urged her fellow Muslims to randomly murder Americans, tweeting, “You have much to do while you live under our greatest enemy, enough of your sleeping! Go on drive-bys and spill all of their blood, or rent a big truck and drive all over them. Veterans, Patriot, Memorial, etc., Day parades… spill all of their blood and drive all over them. Kill them.”

Hers was the voice that repeatedly urged fellow Americans to join her terror organization, taunting “There are so many Aussies and Brits here but where are the Americans, wake up you cowards.”

She married three different ISIS fighters. She admits that she wasn’t fazed by the viciousness of its methods – the burning alive of captives, the beheadings, the unbelievably cruel tortures of prisoners. “After all they would have done the same to us,” she offers.

But with the change of fortune of the caliphate and the imminent defeat of ISIS, Hoda is prepared to change her mind and her affiliation. She has come to realize, she now says, that “her life is not going as planned.” And so she shares with us the realization that Americans do have at least one positive quality. “I believe that America gives second chances.” So Hoda is asking for is a simple request: Please give me a second chance – I made a mistake!

In the guise of goodness, there are too many who believe that to pardon every criminal without punishment or to ignore consequences for past wrongdoings is the most noble option – whereas the truth is that to forgive the undeserving is to remove the most powerful safeguard for the survival of society and the legal system.

To speak of forgiveness as if it were the automatic entitlement of every criminal is to pervert a noble sentiment into a carte blanche for mayhem and chaos.

It was not Dostoyevsky who first coined the concept of crime and punishment. It was the Bible itself, the same words of God which taught the world the value of compassion and kindness, nonetheless emphasized that mercy has its limits and that forgiveness is restricted by boundaries. God holds people responsible. He criticizes, He condemns, and afflicts those who committed crimes.

The day after the Columbine High School massacre, a group of students announced that they forgave the killers. A short while after the Oklahoma bombing, some people put out a call to forgive Timothy McVeigh. And on September 12th in 2001 on several American campuses, colleges groups pleaded for forgiveness for the terrorists responsible for the horrific events of the previous day.

These weren't just misguided gestures of compassion. They were serious sins with potentially tragic consequences. Evil unchallenged is evil condoned. To forgive and forget, as Arthur Schopenhauer so well put it, "means to throw valuable experience out the window." And without the benefit of experience's lessons, we are almost certain to be doomed to repeat them.

Hoda Muthana posted a tweet just after the day in 2015 when jihadists stormed the offices of Charlie Hebdo, the satirical magazine, and viciously slaughtered 12 victims. “Hats off to the mujs in Paris,” using an abbreviation for mujahedeen. When the magazine decided to continue printing in spite of its decimated staff the world was amazed by the front page in the aftermath of the carnage. There was a cover with an image of the tearful Prophet Mohammed holding a sign reading "Je Suis Charlie" beneath the headline "Tout Est Pardonne," or "All is Forgiven."

Speaking to BBC, cartoonist Zineb El Rhazoui said the cover was “a call to forgive terrorists Cherif and Said Kouachi” responsible for the atrocity. Rhazoui told The Guardian that "We feel that we have to forgive what happened. I think those who have been killed, if they would have been able to have a coffee today with the terrorists and just talk to ask them why have they done this ... We feel at the Charlie Hebdo team that we need to forgive…Everyone must think about this forgiveness."

After an attack of barbaric proportions came the incredible distortion of the ideal of forgiveness, offered as fitting response to murder and terrorism. And so to this day, as evidenced powerfully in these last few weeks, France continues to suffer from the delusion that evil can be fought with “a cup of coffee” and a show of friendly understanding.

Hoda Muthana is not the only traitor seeking “a second chance”, hopeful that the Americans she sought to have murdered will now show her the mercy she never felt necessary to grant them when the dream of the caliphate seemed attainable. There is now a group of women who in defeat have remarkably seen the light of regret and “contrition.” They believe that American naïveté will grant them forgiveness.

I pray they are wrong. Not because I lack compassion – but because I share with God the demand for justice and the need for a world which makes clear that the choice of evil has consequences.

Not Safe Anymore: Rapper Responds to Texas Terror Attack
Should I Break Up, Get Engaged or Keep Dating?
Time Is Your Precious Commodity
A Constant World in Flux
Comments
MOST POPULAR IN Current Issues
Our privacy policy