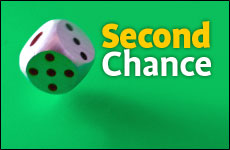 Allowing ourselves one more spin of the dice.

Struck down with a mild case of chicken pox, and thoroughly enjoying its benefits, my daughter Esther and I were passing time in battle. The battle was innocuous; the playing field was a popular board game. Some rules had been modified, and even suspended, in deference to her tender years and vulnerable health, but we were going at it with passion.

Esther spun the dice and it landed her just where she didn’t want to be. Any next spin would take me to victory. The game was up. Before surrendering, she surveyed the board and her options.

“That wasn’t a real spin,” she tried.

I responded with a doubtful look.

“The dice fell off the board, so it doesn’t count.”

I stared at the board and pretended to consider the legitimacy of her claim.

In a final appeal, she eyed the game board sadly and asked, “Can I have another chance?”

“Well,” I replied. “You’re sick, so I guess you should get another chance.”

Of course, what I really meant was I love you and I want you to win, so of course I’ll give you another chance.

What is it about second chances? When we fail, we always hope for a second chance. Sometimes we hope for it, sometimes we request it, and there are times we even demand it. Often we know we don’t really deserve a break, but we ask for it anyway. Even when given that second chance, we sometimes fail yet again and need another try!

There are the times we allow ourselves a new start, and other times that we close the doors even upon ourselves.

Can we rationalize asking for one more chance after we fail, disappoint, miss out or just plain blow it?

One year after the Exodus, it was time again for the Jewish people to bring the Passover offering. But some individuals ran into a problem. Those in charge of carrying the coffins of Jacob’s sons, to their final burial place in Israel, were ritually unclean, and thus unable to participate in the Pascal lamb. (Numbers chapter 9)

In their great love for God and their desire to be close to Him, they asked for a second chance. In response, as a reflection of God’s great love for us, Pesach Sheni was instituted for all time. A second opportunity to join in His table.

No fanfare; just a chance to catch up where you missed out.

The many subsequent Pesach Shenis afforded our people a male-up opportunity to perform this obligation. Bad weather prevented your traveling to Jerusalem? No problem. Sick in bed and now recovered? Okay. Became a Bar Mitzvah right after Pesach, but before Pesach Sheni? Here’s your chance. Another Pesach was available, ready for our participation. But this time, no Seders, no cleaning out all the chametz, no four cups of wine. No fanfare; just a second chance to catch up and to pick up where you missed out.

Pesach Sheni, the day slated by the Torah for a second chance at bringing the Passover offering, is upon us. It gives us the opportunity to reflect on how God’s reservoir of love for us is endless. Though we have no Temple offerings today, we get a lot of second chances that show His love for us. An accidental meeting with a friend you’ve slighted might give you the chance to make good. An extra half-hour that you didn’t anticipate might be utilized in meaningful prayer. Hateful or damaging words that have been spoken can’t be pulled back, but with effort, peaceful words can be expressed instead.

We can never guess how God’s kindness will manifest itself. It might be something as small as an altered grade, or as vital as an optimistic diagnosis. But if you want to be close to God badly enough He’s always ready to provide an alternative. There’s always another opportunity, another prospect, one more spin of the dice.

Say Something & the Myth of Overnight Success
Can You Show Me This "God?"
How to Become Immortal
Judaism and Mental Health
Comments
MOST POPULAR IN Spirituality
Our privacy policy
Aish.com Is Looking for Great Writers