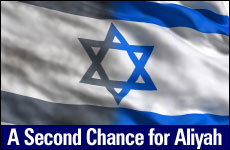 One family turns back the clock.

Sixty-three years ago, in the spring of 1949, my father and his family received a letter from Israel that would forever change their lives.

The letter, written by my grandfather’s brother, must have come as quite a shock. Refugees of the Second World War, my 17-year-old father and his family were waylaid in a displaced person’s camp in Western Germany. They were the “lucky ones,” the ones who had outrun Hitler’s war machine by fleeing Poland in the early days of the war. Refugees in the Soviet Union for five years, they migrated further and further east, eventually reaching Kazakhstan. Constantly on the run, hungry, and lacking a roof over their heads, nonetheless 10 years later they indeed may have felt lucky. They were alive.

To Israel or America – that was the question. For my teenaged father, it was no question at all.

After a brief and unhappy sojourn in Poland after the war, they traveled to Germany, where the survivors of Hitler’s war of extermination gathered for their next journey. To Israel or America – that was the question. For my teenaged father, it was no question at all. The son of an Orthodox Jew, he had nonetheless rejected yeshiva schooling post-war for a secular ideal: Zionism.

At the time, Israel’s youth and political movements were operating throughout Europe, and for most of my childhood he could repeat their names with pride. There was Mapaam, the socialist wing that would form the nucleus of the kibbutz movement and Mapai, the precursor of the Labor party. This sense of connectedness and intensity for Israel was a fixture of my childhood in Skokie, Ill., where my parents eventually settled. In addition to daily stories about relatives lost and the struggles of those who survived, Israel was a symbol of strength. Israel was the place where free Jews lived. Israel was the place of salvation – for my father not so much spiritual as physical. Israel was where Jews fought back and pride was restored. More than 6,000 miles away, in our little suburb of Chicago, Israel was, for me, nothing less than a miracle.

My family and I made aliyah eight weeks ago. My wife and I came to the decision after much debate and discussion, but it really came down to one thing only. During a “pilot year” in 2009-2010, Rachel and I, who were both learning in Jewish seminaries, sent our almost-two year old to a preschool in Kiryat Moshe, in Jerusalem. Our little Chana knew no Hebrew when she arrived. In fact, she couldn’t speak much English either, but we sent her to Hebrew language preschool nonetheless figuring that she would adapt and learn quickly. By the end of our year, she had surpassed our expectations. Not only could she speak Hebrew, she wouldn’t even answer us in English. And there was one thing more: the songs. She would come home singing Hebrew songs that she had learned. Patriotic songs, psalms, children’s tunes, songs that my wife and I knew not at all, but that our little two year old could recite by memory.  A little girl singing Hebrew songs so gracefully and naturally, that’s what did it for us. That’s what killed us, broke our hearts right on the spot. That’s why we moved to Israel.

After 2,000 years, we too could participate in the miracle of modern Israel.

Of course, it was more than that, but it needn’t be. Right there, standing in front of us, Chana had fulfilled our purpose for aliyah. She had become a native Hebrew speaker. After 2,000 years, we too could participate in the miracle of modern Israel. While my wife and I could never become native Israelis, our kids could, and that was all we wanted.

Related Article: Still Crazy: Why We Made Aliyah 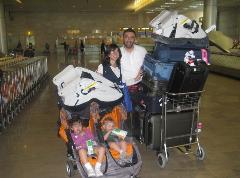 But that’s not the whole story. Our Sages tell us that God gives us three gifts that can only be acquired with difficulty: Torah, Eretz Yisrael and the World to Come. Before we came, we were duly warned that aliyah would be difficult. Nearly every person informed us that integrating would be a challenge and we were of course aware of the families who had returned to Chicago after their aliyah had failed. I was a little suspect when my shul rabbi blessed us for an integration that should not be “too” difficult. Nonetheless, we were not deterred. How difficult could it be?

Of course, we’ve only been here eight weeks, but the sense of dislocation and disorientation is profound. God forbid, I am not in any way comparing the difficulty of settling the land for the generation of 1948 to the present day. We came on a chartered plane and have been provided with generous stipends. We immediately moved into an apartment and I even took my work from the United States with me. But there is a reason the Sages said what they did. Israel’s challenges are not only physical, but also mental. And they are not only mental, but also philosophical.

The other day, we took the train from Beit Shemesh, where we live, to Jerusalem. It’s an absolutely stunning ride. The track slithers along a green valley topped by sheer, rocky mountaintops. A rushing river flows at the valley’s bottom and bikers use a gravel access road for their off-the-beaten-path forays. The line itself is part of the Jerusalem to Jaffa railway, completed in 1892 and considered the first modern railway in the Middle East. In other words, not only is the trip itself breathtaking, it also manages to evince pride in Zionist achievements over the past century and more.

But for all that, I felt something lacking. As much as I want to connect to the land, I have no childhood memories of those mountains. There were no trips to the Jerusalem Zoo from Beit Shemesh, no stories of grandfathers who rode the first rails to Jaffa. Yes, I have memories of Jerusalem (I studied and lived there for a total of two-and-a-half years) but the rest of the country feels somewhat alien, as if I am walking around in a chapter of Herzl’s Altneuland.

Several years back, when I was living in Brooklyn, I met a Ger Hasid at a Shabbos meal. In the course of conversation, it was revealed that he was a convert. The man sitting next to me with long payes, a Shabbes bekeshe and a streimel was a convert. Fine. But then he said something that I’ll never forget. As much as he had transformed his life, he said, as much as he prayed three times a day and took on Jewish customs and married a Jewish woman; as much as every person on the street would never mistake him for anything but a member of a Jewish religious sect, he was still a kid from a farm in eastern Ontario. And when he returned to that farm—that’s when he felt at home. He felt it in his kishkes, he said. That was his land; that’s where he was from.

After being here for eight weeks, I now understand better why the Jewish people were forced to wander the desert for 40 years. God knew that the adults who left Egypt would never feel completely at home in Eretz Yisrael. But their kids: that was a different story.

Before we left, our families in Chicago threw us a going-away party.  Toward the end, I offered a few words that I hoped would mollify some of the unhappiness our leaving had created. I told them that, while I understood we were making them sad, we also hoped that we were making them proud.

Left unsaid was that I felt as though I was completing a circle. Back in 1949, my grandparents held the tickets to Eretz Yisrael in their hands. One letter changed that. Our rabbis tell us that, paradoxically, God controls our lives while also allowing us to exercise free will. My free will, for my family, led us to make a choice that my grandparents had not. Only time will tell if it was the right one.

This essay originally appeared in The Jerusalem Post in September 2011

Heavy Metal Hatikva
Deep Breaths
What Happened to the Truth?
The Japanese Everything Bagel Spice Recipe
Comments
MOST POPULAR IN Israel
Our privacy policy