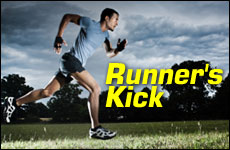 Ever feel like you just can't reach the finish line?

Life is like a 1600 meter race. The grueling run is four laps and mirrors what you feel when you begin any new pursuit.

The first lap the runner is fresh. He's inspired, well rested and itching to get to the finish line as fast as possible. He's surrounded by other like-minded runners all wanting to be the first to cross that line. When a person first starts a project, business or class, inspiration drives him. Everything feels easy and the goal is achievable and crystal clear.

Fatigue is starting to kick in. The body heat of the runner begins to rise and sweat begins to trickle down his forehead. The close-knit pack of runners begins to spread out. The first inklings of pain begin to manifest in his lungs. The runner is still keeping his head up, remembering the inspiration that put him in the race in the first place, but it is getting harder.

What began as a mild burn in his lungs now feels like a raging conflagration. Runners begin to pass him, and our runner starts to forget why he entered the race in the first place. His body refuses to cooperate and he feels like quitting. The inspiration that drove him in the first and second lap is leaking out of him. It’s a struggle to lift his knees, yet he pushes on despite the stilting pain.

The last lap is where character is forged. In those last few meters of unbearable pain the runner begins to hear a rationalization that may make sense in the moment, but in reality is completely illogical. Jog, coast, let the momentum from the previous laps carry you through, he begins to tell himself. It was a good effort over all. You've suffered enough already… The pain he feels now clouds the work put in from the previous three laps, obfuscating the reason he entered the race in the first place.

But the runner decides to keep running – hard. Three laps of pain and hard work only to give up in the last one is insanity. The first half of that last lap is comparable to what someone feels when they are dying. The runner is barely getting enough oxygen into his lungs; water is leaving his body like a shattered aquarium. He feels the energy in his body fleeing. His body is screaming, Quit! Quit! Quit!

As he approaches the second half of the lap his mind breaks through the pain and shouts above his aching body. Look at the finish line!

Suddenly, incomprehensibly, his mind clears. He looks up and remembers why he started the race in the first place. His eyes lock on the white line at the end of the track, the goal, the reason. Inspiration floods his mind causing him to ignore his body’s pain. Our runner finds that hidden inner reserve that we all call upon when it really matters, when we have fought longer than we thought we could, when we have pushed ourselves farther than we thought we should.

The fastest runner doesn't always win the race; more often than not it's the one who can work through the most pain, eyes locked on the goal.

It’s called the runner’s kick and it only happens to an athlete who has been pushing himself near his limit for the duration of the race. It’s a phenomenon that is very counterintuitive to how one would think the human body should react, a physiological miracle. Proof that if we truly put in every ounce of our being into running – or any endeavor – God will give us that final push and help us get to the finish line.

Arms pumping, back straight, chin raised high, the runner surges past the jogging zombies that have given into the pain. He breaks through the finish line, simultaneously smashing his previous record time and the barriers his body had placed in his mind.

After the finish line the runner feels a deep sense of joy. Completing a project hurts, but the satisfaction one feels afterwards makes up for the pain. The runner is also amazed, realizing there was a point where he almost caved into the pain. For a moment he contemplates what his reality would be like now had he given up; it’s a stark contrast.

Any pursuit worth doing will always hurt, but if we force ourselves to keep our eyes on the finish line and remember our goals, inspiration will flood back. In the great race of life, it isn’t always the fastest runner that wins the race; more often than not it's the one who can work through the most pain, eyes locked on the goal.

Joshua Shapiro is currently a student at Aish Hatorah Jerusalem. He received his B.A. in History from UCLA, and is working on his Masters in History from California State University: Northridge. Before coming to Jerusalem he had worked as a Track and Field coach for six years in Southern California. He also competed for five years in high school and college Track and Field as a Pole Vaulter. When he isn't studying Judaism in Jerusalem or History in California he enjoys rock climbing and writing.

Principles of the Soul #10: The Mystical Art of Passover Cleaning