Jews Aren't Alcoholics and Other Misconceptions about Drinking 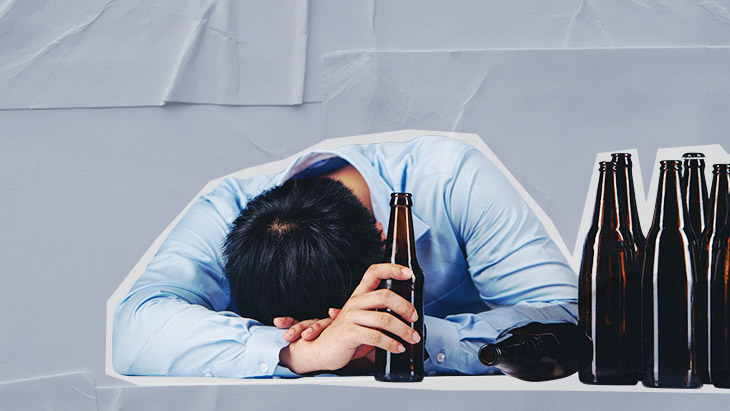 Before I could make the admission that I had a problem, I had to understand what the true meaning alcoholism.

Let’s face the facts. Jews are just as prone to addiction to alcohol, drugs, sex, overspending, overeating, and other negative behaviors and substances as anyone else.

Jews often don’t believe they could be alcoholics primarily due to a lack of understanding what alcoholism is. Many people assume that only skid row bums or barflies could be alcoholics. In fact, homemakers, attorneys, doctors, Jewish community leaders…anyone can be an alcoholic. The disease doesn’t care if you’ve been to Yale or jail, and doesn’t make allowances for those who pray three times a day or those who pray once or twice a year.

I didn’t believe I was a problem drinker. I grew up in a nice home in the suburbs, went to a top college and graduated in four years, and graduated from a top law school. Okay, I partied with my friends every so often…but no more than the average 20-something.

Before I could make the admission that I had a problem, I had to understand what the true meaning alcoholism.

Everything pointed in a positive direction. Except for the fact that I couldn’t keep a dollar in my pocket, keep a job, or hang onto a relationship. It wasn’t until I’d drank my way out of a legal career in less than two years that it finally occurred to me that maybe booze was a problem in my life.

As I like to say, I overcame every advantage on my way to the bottom.

Before I could make the admission that I had a problem, I had to understand what the true meaning alcoholism. I’m fortunate to be celebrating 29 years of continuous sobriety. But the starting point wasn’t putting the drink down. The real starting point was understanding what I was up against.

According to Alcoholics Anonymous, alcoholism is a three-fold illness or disease.

The first part is physical – it’s the compulsion to keep on drinking when a non-alcoholic might say, “I’m starting to feel it,” and push his or her drink aside. True alcoholics look at a drink that’s not finished as alcohol abuse.

Getting loaded and in trouble doesn’t have to happen every time for you to be an alcoholic. But if you find that once you start drinking, you drink more than you intended, or that other people were surprised by your drinking, or you tried to hide from others how much you drank, or you did or said something stupid, dangerous, or illegal, you may well have the physical compulsion that’s the first aspect of alcoholism.

Then comes the mental obsession with alcohol. If you find that you can trust alcohol (or drugs or whatever) more than you trust people – because alcohol never says no, won’t dump you, won’t throw you out of the big bed, won’t fire you, won’t refuse you – you may have the mental obsession, the second part of alcoholism.

Combine the physical compulsion with the mental obsession and you get the third aspect of alcoholism, which A.A. calls “the spiritual loss of values.” We may have learned right from wrong from parents, older siblings, rabbis, teachers, or coaches. Yet whatever values we held get wiped away in favor of a single value: killing emotional pain.

Alcoholics and addicts drink and use for one primary reason: to dull the pain they feel. Why are they in pain? There could be a thousand reasons. Unavailable parents. Failure of a career or relationship. A tragic death. Anything. But once you take a seat on the killing pain train, it’s awfully hard to hop off.

Alcoholism is called “the great eraser” because of its power to wipe out all the values – honesty, love, responsibility, community, even awe of God – that we hold dear. These three phases of the disease – the physical compulsion, the mental obsession, and the spiritual loss of values – can combine to turn anyone into a problem drinker.

Fortunately, you can stop, stay stopped, and have a great life without alcohol.

If you think you might have a drinking problem, Google Alcoholics Anonymous and the name of your city or state. Face-to-face and online meetings can be found anywhere. And if you call the phone number of the A.A. Central Office in your locale, you’ll find a friendly voice on the other end of the line…an A.A. member who understands what you’re going through. Make the call now.