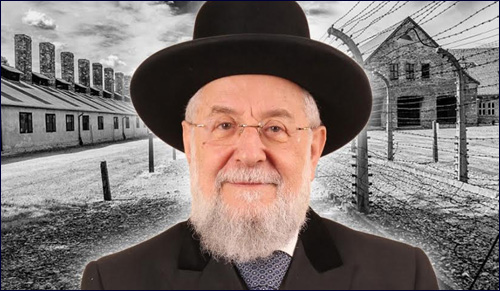 A true story from Buchenwald, witnessed by Rabbi Lau when he was a young boy.

They sat face to face in the basement of a gracious home in Atlanta, a retiree from Queens meeting the former Chief Rabbi of Israel and both symbolizing the miracle of Jewish renewal. Although strangers, they shared an unfathomable pain seared into their souls by the Holocaust.

“It was hell on earth,” Ben Hiller, in his mid-90s, told Chief Rabbi Israel Meir Lau, 80, who nodded knowingly. “Every day they had selections, killing those people who were weak. They took away a lot of our food. They made us fall out, all the prisoners in a circle. The SS walked the dogs around us and made us suffer more.”

Hiller said he was the only member of his family and one of 17 Jews who survived from a population of 6,000 in his hometown in Poland.

The Nazis murdered most of Rabbi Lau’s family as well, except for his older brother, his half-brother and his uncle who already had moved to Palestine. Liberated from Buchenwald by Allied forces in 1945 as an 8-year-old boy nicknamed Lulek, Lau kept his 1,000-year lineage of 38 generations of rabbis unbroken.

Embers of Life from the Ashes

In Atlanta recently for the dedication of Congregation Beth Jacob's renovated sanctuary, Rabbi Lau declared triumph again and again. In a private meeting before the ceremonies, Ben Hiller proudly told of his two sons who are rabbis, along with 15 grandchildren and 40 great-grandchildren. Rabbi Lau’s eyes danced. “This is the nachas. This is also the greatest victory. You kept Yiddishkeit, Judaism. The Nazis’ war wasn’t only against Jews. It was also a war against Judaism. They destroyed 1,046 shuls in one night on Kristallnacht. They didn’t take the Jewish banks, clinics, stores – just synagogues. So when you survived and you built a nice family, it’s a double victory, physically and spiritually.” 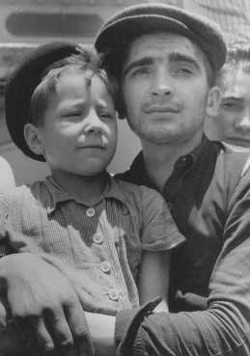 Yisrael Meir Lau (8 years old) in the arms of Elazar Schiff, Buchenwald survivors at their arrival at Haifa on 15 July 1945

What is our secret of eternity, Rabbi Lau asked rhetorically. “Look at the walls, the ceiling, the ark on the east side. This is the answer. The answer is the shul, and tradition. Jewish heritage keeps us as a nation, in spite of pogroms and the Holocaust.”

“The Nazis knew that the shul is the heart, our heart. If it is alive, we are alive.” It serves three functions for us: a place of prayer, Torah learning, and gathering. 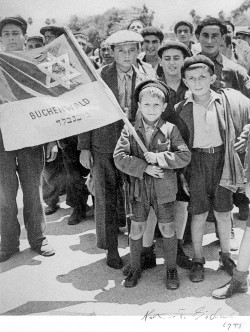 Rabbi Lau as a boy, holding the flag

Rabbi Lau uses his life as a form of revenge. He consoles fellow Holocaust survivors, he uplifts Jews and gentiles alike, and he shares ageless wisdom with the world at large.

It all began when he was liberated from Buchenwald and given a Hitler Youth uniform to wear because he had no other clothing. To quote from his autobiography, Out of the Depths: “The American soldier asked me what I wanted to do with my life, and I answered, ‘I want to take revenge.’ Hearing this, he gave me his rifle.”

As he grew older he learned there are other ways to defeat enemies who try to extinguish the flame of Jewish tradition.

He carried the rifle with him through Germany, France and Italy, and ultimately into Palestine in 1945. As he grew older he learned there are other ways to defeat enemies who try to extinguish the flame of Jewish tradition.

Rabbi Lau shared one he didn’t publish in his book because the subject, a modest teacher in Israel, was still alive at the time. As young “Lulek,” Lau witnessed the events in Buchenwald on Shabbat HaGadol, the Sabbath before Passover:

“The last year of the war, 1945, the sixth year already, we didn’t see a light at the end of the tunnel. We saw we were deeper and deeper in the pit. Every hour the train stopped. Hundreds of Jewish prisoners of war were brought to the concentration camp, from Holland, France, Austria, Germany, Russia, Lithuania, Latvia, Hungary, Greece, North Africa.”

In addition to his brother Naphtali, two fellow prisoners were from Rabbi Lau’s city in Poland: Leibel and his son Moishe. Leibel was very sick.

Natphtali didn’t want the son to see his father dying, so pretended to take Leibel to a clinic. Meanwhile Leibel died outside. Moishe, upset that there would be no funeral, grave or shiva, insisted on saying kaddish for his father. “I know this is my duty. Give me a siddur (prayer book) for five minutes,” the boy said. The Jewish men replied to him, “Moishe are you crazy? There’s no siddur, it’s forbidden in Buchenwald.” 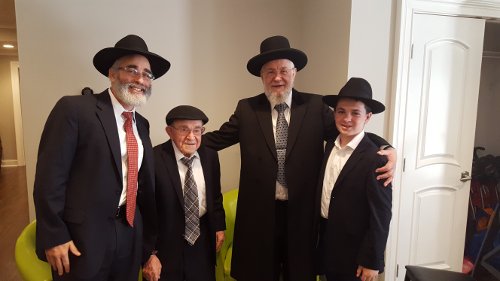 Rabbi Lau with Ben Hiller, his son, and grandson

One of the men whispered in his ear that an old Jew who worked in the laundry might have a siddur hidden somewhere in the concentration camp. Moishe went to the laundry and pleaded with the old man. “My father died an hour ago. I can’t mourn my father, I don’t know kaddish by heart. Can you please give me your siddur for five minutes?”

The old man was shocked. “Don’t speak about a siddur. It’s forbidden.” Moishe sensed the man was hiding a siddur, and took 150 grams of bread – his daily meal in Buchenwald – from his pajama pants pocket.

“Please give me your siddur for five minutes. I will fast today but I must say kaddish for my father.”

Moishe extended the bread to the old man. “Please give me your siddur for five minutes. I will fast today but I must say kaddish for my father.” The old man replied, “Take the bread, you are young. I hope you will survive.” He left for a few minutes and returned with a siddur. Moishe said kaddish for his father, counting 10 shirts where Jews had left their imprint as his minyan. 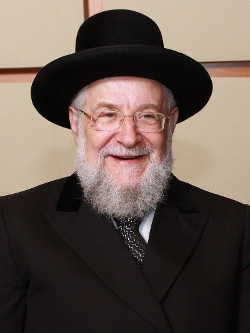 Moishe died an old man himself in May 2016. Rabbi Lau told the above story at his funeral. “Moishe, how lucky you are. Three of your sons are standing here waiting to say kaddish for you; they don’t have to pay with their bread. We aren’t in a concentration camp anymore. We are in Eretz Yisrael.”

Rabbi Lau counts Moishe as another triumph of the Holocaust. “We never forgot: A child was ready to give up his food and starve. This happened in our generation. It’s not Rabbi Akiva. When you see Jews dancing with the Torah in Atlanta, Georgia, who call themselves Congregation Beth Jacob, the chain is unbroken. We are a nation. We can look to the future with hope.”

Click here to watch Ben Hiller tell his personal story about the Holocaust for the first time, to students at Aish HaTorah.

A Touch of Eternity
The Softball Player
How This 6 Generation Bread Baker Brought Back Israel’s Ancient Grains
Olivia Newton John’s Grandfather was a Nobel-Prize Winning Jewish Physicist
Comments
MOST POPULAR IN Israel
Our privacy policy
Aish.com Is Looking for Great Writers