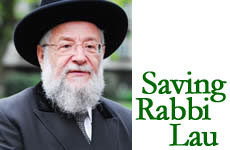 After 64 years, Rabbi Lau finds the person who saved his life.

After surviving the Holocaust as a child, Israel Meir Lau -- a former Israeli chief rabbi -- spent decades searching for the man who saved his life. 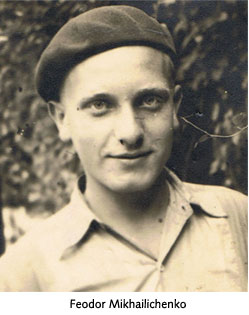 That journey ended with an Associated Press report about a recently discovered Nazi document confirming the identity of the teenager who shielded him from German gunfire when his concentration camp was liberated.

"This closes a circle of 64 years. You look for this person, to whom you owe your life, and you don't know whom to thank," said Rabbi Lau, 72. "He was my childhood hero. A man with a huge soul and a heart of gold."

Rabbi Lau had previously identified a fellow inmate, a non-Jewish Russian named Feodor, as his savior in the Buchenwald concentration camp, but he never learned the 18-year-old's full name. He said Feodor stole and cooked potatoes for him, knitted him wool earmuffs to protect him from the bitter cold and lay on top of him as gunfire erupted when the camp was liberated on Apr. 11, 1945. At the time, Lau was an 8-year-old boy nicknamed Lulek.

"Feodor, the Russian, looked after me in the daily life like a father would for a son. His concern and feeling of responsibility gave me a sense of security," Lau wrote in his 2005 autobiography.

Mikhailichenko grew so close to Rabbi Lau that he wanted to adopt him as a son. But Rabbi Lau kept his word to his murdered family and emigrated to pre-state Israel on a ship of orphaned refugee children. He lost track of Mikhailichenko and despite many efforts could never trace him again.

The mystery began to unfold in June 2008 when Holocaust researcher Kenneth Waltzer of Michigan State University discovered the man's true identity through a Nazi document he discovered in a recently opened secret archive in the small German town of Bad Arolsen. The document had been stashed away for more than six decades. Rabbi Lau first learned the full name of his rescuer through an AP report about the discovery. 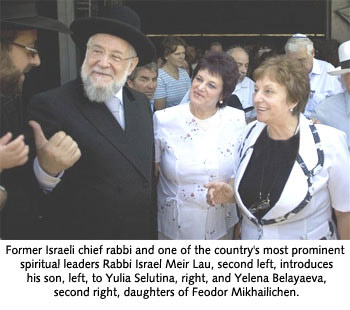 Mikhailichenko returned to Russia, where he became a prominent geologist. He died of cancer in 1993 at the age of 66. But his daughters, Yulia Selutina and Yelena Belayaeva, were quickly tracked down and confirmed that their father often spoke lovingly about a young Jewish boy name Lulek in Buchenwald.

"I looked for him for decades and I never forgot him for a single day."

After last year's discovery, Rabbi Lau invited both daughters to Israel and had them at his home for dinner. There, he introduced them to many of his eight children, 50 grandchildren and five great- grandchildren. "I told them, 'all of this I owe to your father. If it wasn't for your father, none of them would exist,'" he said. "I looked for him for decades and I never forgot him for a single day."

Selutina teared up Tuesday as she accepted a medal and a certificate on her father's behalf. She said her father never forgot Lulek either, and traveled to Buchenwald a year before his death seeking information about him.

Mikhailichenko was featured in a 1992 Russian documentary detailing how he and other Russian inmates helped Lau survive by doing his chores and protecting him from the wrath of German guards.

Mikhailichenko's daughters met with Israeli President Shimon Peres on Tuesday. "There are not a lot of daughters in the world who can be as proud of their father as you can. Your father acted with ultimate humanity when he saved one soul and risked his life," Peres told them. "The entire state of Israel is proud of you and your family and will be grateful to you our entire lives."

Nearly all of the Polish-born Lau's family members were exterminated in Nazi concentration camps. Rabbi Lau's older brother Naftali cared for the young boy until the two were separated upon arrival at Buchenwald in January 1945.

Mikhailichenko was already a veteran inmate of the camp, having been arrested by the Gestapo in 1942 for robbery. He knew the ropes and watched over Lau.

When Buchenwald was liberated by American troops, Lau was among its youngest surviving prisoners. He went on to become one of Israel's most prominent spiritual leaders. He served as the country's chief rabbi between 1993-2003 and is currently the chairman of the Yad Vashem Council, an advisory board to Israel's official Holocaust memorial.

Over 22,700 non-Jews have been recognized by Yad Vashem as "Righteous Among the Nations" since the designation was created in 1963. Those include Oskar Schindler, whose efforts to save more than 1,000 Jews were documented in the film "Schindler's List," and Raoul Wallenberg, a Swedish diplomat who is credited for having saved at least 20,000 Jews.

Mikhailichenko's name is now engraved alongside theirs in a garden at the memorial honoring their roles. Rabbi Lau said Mikhailichenko proved the goodness that exists in humans, regardless of nationality, religion or gender. "You see through him that there is a chance for humanity, there is hope for the world," he said. "Feodor is a lesson of morals, of ethics, of humanity."

One of Us: A Searing Look at Sexual Abuse in the Jewish Community

Star Trek and the Three Weeks
The 21st President of the United States: Failure or Inspiration?
Hiding Their Jewishness
The Jewish Pope: Following the Questions Home
Comments
MOST POPULAR IN Israel
Our privacy policy
Aish.com Is Looking for Great Writers