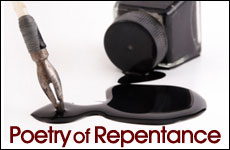 An English Professor discovers the poetry of the soul.

Only when I began to study Paradise Lost, John Milton’s epic re-writing of Genesis, did it to occur to me that being religious was not a sign of neurosis or flaky otherworldliness. In graduate school at Oxford and later at Columbia, for me and many of my fellow Jewish students, Milton was a safe way, without the risk of embarrassment, of experiencing the poetry of a religious sensibility. In earnest discussions of Christian redemptive history, the relationship between free will and divine providence, I lived, through Milton, the possibility of religious engagement.

I may have been able to suspend my disbelief about Christian theology, but when it came to the Jewish High Holidays, I preferred going to the West End Bar on Broadway to returning to my parents’ Long Island Temple. If I were lucky, the assistant rabbi would give a sermon resonating with my graduate school politics. But the public spectacle of repentance, the responsive reading, the instructions – ‘please rise,’ ‘be seated,’ ‘turn to page 374’ – was distant from the inner voice I had been cultivating through reading Shakespeare, Donne and Keats. Turning worship into political activism may have satisfied my social conscience, but it made repentance into something external, a way to avoid myself.

For us, today, the question of repentance, of teshuva or literally ‘return’ to a more authentic self, unblemished by past habits and misdeeds, may be even more vexed. Our knowledge of the complexities of psychic history – of transgressions, dysfunction caused by trauma, and obstinate devotion to self-destructive behavior – may make repentance seem an unrealizable fantasy. Further, an enlightened conception of the self as creative, not merely passive, makes us skeptical about miraculous atonement activated through divine intervention.

Great is teshuva, for deliberate transgressions are accounted meritorious deeds; as the Prophet Ezekiel says, ‘when the wicked man shall turn from his wickedness and do that which is lawful and right – through them he shall live.’

Through them – transgressions – ‘he shall live’? To understand the paradoxical words of the sage – for me, it was a matter of granting him as much credit as I did Milton – requires a different suspension of disbelief, starting with a notion of time.

Through the retrospective glance of repentance, past history can be redeemed.

For Shakespeare’s Macbeth, there is only the ‘tomorrow, and tomorrow and tomorrow’ of successive moments leading the ‘way to dusty death.’ Macbeth’s time is now popularized on t-shirts, in paraphrase, ‘stuff happens.’ Teshuva, however, is based upon a different sense of time, and the High Holidays, starting with the New Year, Rosh Hashanah, challenge us to see our histories – as a people and as individuals – in the shape of coherent stories. In the cosmic history described in the Rosh Hashanah service, the sounding of the shofar marks the beginning and ending of Jewish history, as well as the significant middle.

Heard through the Rosh Hashanah prayers, the shofar-blasts resonate with the first breath inspirited by God into man at the Creation, the sounds of the shofar on Mount Sinai, and the shofar-blast that marks the end of time. Through this story, the present is no longer merely part of a chain of unrelated moments – ‘tomorrow and tomorrow’ – but infused with the knowledge of the future when the shofar announces the redemption of humanity.

This consciousness of time makes repentance on Yom Kippur possible. Not only does the nation have a sense of an ideal future, so too does every person – in which time-future connects back with time-present as well as time-past. Through the retrospective glance of repentance, past history – now not just neurotic obsessions weighing down the self – can be redeemed. But teshuva is not a divine fiat, nor a human one. For repentance is creative, an active process of integration, bringing together the diverse parts of the self.

So important is repentance, the Talmudic sages say, that God created teshuva before Creation, allowing for the unconventional story-telling that undoes normal cause and effect. Past actions do not bring about future events, but the ideal of an unrealized future re-creates the past so that a different outcome is possible. But though I may regret past deeds, indeed, in some cases must, I also acknowledge that I am who I am now because of who I once was. My imagined future was generated by my desires and, this is the sage’s insight, even my transgressions.

Atonement requires the courage to acknowledge that the past, no matter how seemingly recalcitrant.

Atonement may be a divine gift, but one requiring the courage to acknowledge that the past, no matter how seemingly recalcitrant – no matter how ‘damaged’ I may feel – is mine to transform. The repentance that is transformative is an ‘act of love’ for only by accepting the self, however daunting a prospect that may be, are transgressions turned into a source of life. When repentance comes out of fear of punishment, and the past is merely renounced, transgressions are made null, but the self remains unchanged. But repentance based upon love works because intentions and actions, never simple, are open to reframing. The story I tell now reveals that the past about which I feel regret, perhaps even shame, is not only consistent with, but propels me towards a future I had not yet imagined.

‘No one,’ the psychoanalyst Adam Phillips writes, ‘can be better at living your life than you.’ But we find excuses in the personae we adopt – sometimes our public political and even religious commitments – to avoid who we are, and who we want to be. Repentance neither means neurotic fixation on past failure nor avoidance of aspects of ourselves we prefer to ignore. Nor does it mean believing in external rituals that guarantee purification.

Teshuva does mean a commitment to living our lives, and a faith that the stories we tell can give both past and present a new voice. Not a vicarious engagement, teshuva permits cultivating the poetry of a personal religious sensibility – starting with our own rewriting of beginnings (finding signs of life in transgression, trauma and loss), continuing in the reinvention of the present, and opening, finally, to the possibility of a different future.

Professor William Kolbrener is professor of English Literature at Bar Ilan University in Israel.  He writes on Judaism and Jewish identity, and has written several books, among them, Open Minded Torah: Of Irony, Fundamentalism and Love and The Last Rabbi: Joseph Soloveitchik and Talmudic Tradition.