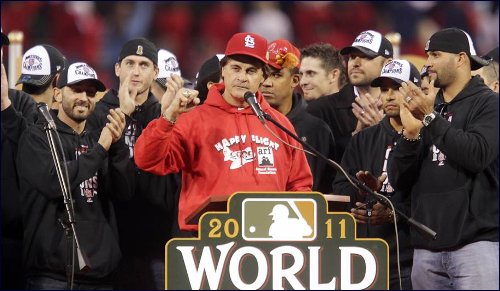 An inspiring lesson from the manager of the St. Louis Cardinals who beat impossible odds to win the World Series.

For many folks, fall heralds the arrival of High Holidays, replete with introspection and spiritual striving. For others, it mainly promises the World Series, the tense and dramatic center stage on which seven months of major league baseball crowns its world champion. Tuning in to a recent radio broadcast, I saw how baseball and a coach’s belief in his team could shed light on my own Yom Kippur plans.

In early September, the Mets and Yankees were battling long odds to squeak in to the postseason as wild cards. I’m not a baseball fan, but flipping through the radio news during a car ride, I paused at hearing the sports announcer’s passion as he reminded New Yorkers of the story of Manager Tony La Russa and his 2011 St. Louis Cardinals.

By the end of August, 2011, the Cardinals’ slumping play had left them ten games behind their division leader and 10.5 games away from the last wild card spot. With only 32 games remaining in the regular season, their odds of making the playoffs stood at 1.3%.

Winning an astonishing 23 of those 32 games, they captured the last wild card berth on the last day of the season and went on to complete the largest comeback in the history of baseball by winning the World Series.

“I once ran into Tony at a press box,” shared the sports announcer, “and I asked him: what did you do to right the ship?”

He really had my attention now.

“I’ll summarize what he said like this: ‘I believed in the team. People expected me to make changes, shake up the line-up, move guys out of starting roles. I didn’t. The last thing I wanted them to think was that they weren’t the right guys; they were. If they knew that, I knew they’d make it right.’”

The story of falling short and facing one’s failures is universal. If Tony La Russa’s understanding helped catalyze the greatest baseball comeback ever, surely it offered insight to aspirations for my own High Holy Days “comeback.”

What came to mind are the 13 Attributes of God’s Mercy, a prayer said countless times throughout Yom Kippur. They are the secret formula, reveals the Talmud, that God gave the Jewish people with which to transform the damage and consequences of our greatest personal and communal failures.

The first two attributes, simply a repetition of God’s name “Hashem (YHVH),” reminded me of La Russa’s message. Our Sages teach that this name of God signifies the power with which He sustains all life moment to moment. Why say this name twice? To show that His commitment to our lives is two-fold. Just as He provides the life force a person relies on in the moment he blows it, He gives life afterward, too. He doesn’t just pull the plug with mistakes.

Perhaps the greatest challenge we face when looking to address our failings is our own discouragement. “I failed,” we might hear ourselves say, “too many times to even remember. Past performance indicates future results. Why bother trying?”

But God continues to provide us life even after we make mistakes. He hasn’t given up on us. Like a leader who sees his team’s potential and wants their success, God gives loving space to learn and make mistakes and then provides loving space again to accept responsibility.

As La Russa told the press the day after his Cardinals hit their nadir, "I guarantee that the team you have seen the past few weeks is not the team we have, and I believe you will start to see our team tomorrow."

On Yom Kippur, with every recital of the 13 Attributes, we hear God reminding us, “I guarantee your moments of mistake are not the real you. See my commitment to your life, pick yourself up, and make that comeback.”