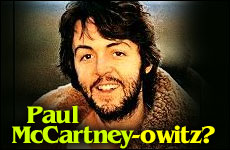 Rumor has it Paul McCartney is converting to Judaism. Nu, so let's investigate.

Paul McCartney, or rather Sir Paul McCartney, was known as “the Cute One” of the Beatles. Word has it that this cutie pie is contemplating converting to Judaism. In fact, he attended Yom Kippur services and subsequently told his friends he'll be completing his conversion studies next year. Sir Paul, on behalf of the Jewish People, let me be the first to wish you mazal tov! Heck, mazal tov in the sky with diamonds!

Mazal tov in the sky with diamonds!

A Jewish Paul McCartney boggles the mind. “Jew” and “Beatle” don’t ordinarily go together. Especially when you consider what the Beatles may have been like as Jews. Yarmulkes on top of their Beatle haircuts. Refusing to perform on Friday nights. Contract demands for kosher food backstage and keeping the meat and dairy separate. The Beatles once got into trouble for stating that they were more popular than Jesus. Perhaps if they were Jewish, they would have said they’re more popular than Moses.

And let’s not forget that someone else very important to the Beatles was Jewish – their first (and perhaps most beloved) manager, Brian Epstein. In fact, Paul McCartney once said, “If anyone was the fifth Beatle, it was Brian Epstein.”

Of course, the crux of the Beatles’ popularity and acclaim is their amazing body of material – the songs. Surely, if the Beatles had been Jewish, this might have been reflected in a number of their songs, both as a group and individually. Consider:

I Want to Hold Your Blintz

All You Need is Torah

Everybody’s Got Something to Hide Except Me and My Bubbe

Got to Get You Into My Shul

Happiness Is a Warm Kreplach

I’m Happy Just to Whine With You

Baby You Can Drive My Car – But Not On Shabbat

While My Accountant Gently Weeps

Isn’t This Brisket a Pity

All Kidney Stones Must Pass

Living in the Wholesale World

Moyle on the Run

Give Borscht a Chance

Whatever Gets You Through the Audit

Cold Turkey (Would Adding a Little Stuffing Kill You?)

Watching the Wheels (On My Portable Torah)

Well, you get the idea. Once Paul converts, we’ll be able to claim him as yet another of our world-class Jewish musician/singer/composers, along with Bob Dylan, George Gershwin, Kinky Friedman… Okay, granted, some are more world-class than others. Perhaps we’ll run into him at shul and if we’re lucky that day, the cantor will let Paul sit in and do a number or two. If that was the case, not only would there be no empty seats in shul, but there’d be lines around the block and hundreds gathered outside waiting for Sir Paul to crowd surf. Perhaps shul officers would have to start giving out numbered wristbands the day before services.

After Paul converts, we’ll no doubt be subjected to all the TV entertainment tabloid shows airing footage of Paul captured doing Jewish things:

It’s even conceivable that Paul could find himself becoming extremely pious. After all, it’s happened to others, such as Cat Stevens with Islam. I’m not saying that Paul would become a Torah scholar, though stranger things have happened. But enough about Sarah Palin’s Vice Presidential campaign.

In “Fiddler on the Roof,” Tevye longs to be rich, expressing:

“If I were rich, I'd have the time that I lack
To sit in the synagogue and pray.
And maybe have a seat by the Eastern wall.
And I'd discuss the holy books with the learned men, several hours every day.
That would be the sweetest thing of all.”

Well, Paul is a rich man, so he conceivably could do all of that. Or he could fund Jewish hospital, school or shul wings. Donate to or do benefit concerts for Jewish charities. Even be a spokesperson for worthy Jewish causes. Like JDate or the All Brisket Food Bank.

And so, if I may be so bold, I’d like to get Paul started with a little conversion gift – my new version of the Beatles’ “I’m Happy Just to Dance With You” song, reflecting his new-found Judaic faith and the importance of food in Jewish culture:

“I’m Happy Just to Eat With You”

Welcome to the Tribe, Sir Paul!

Pillsbury Doughboy Burned in Tragic Passover Cleaning Accident
Don’t Believe in Other Gods Versus God is One
Seeing Without Eyes
Why Shouldn’t We Eat Whatever We Want?
Comments
MOST POPULAR IN Jewlarious
Our privacy policy
Aish.com Is Looking for Great Writers