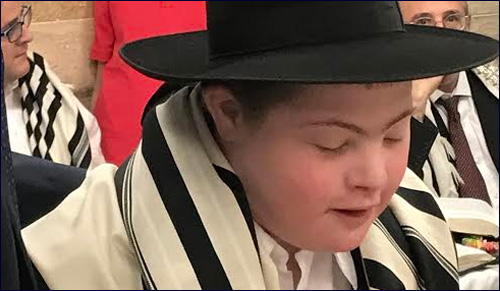 One milestone day encapsulated the highs and lows of raising a child with Down's syndrome.

If one day could encapsulate the highs and lows of raising a child with Down's syndrome, the day our son, Yehuda, was called to the Torah as a bar mitzvah would be that day.

My wife and I thought it would be a good challenge for Yehuda to not only have an aliyah and recite the blessings over the Torah, but to actually read from the Torah, like most of the “regular” boys do to celebrate their bar mitzvah.

We decided he should do it during Chol Hamoed Pesach in the 7:00 AM minyan when there would be less people at shul and less pressure if he’d back out at the last minute. 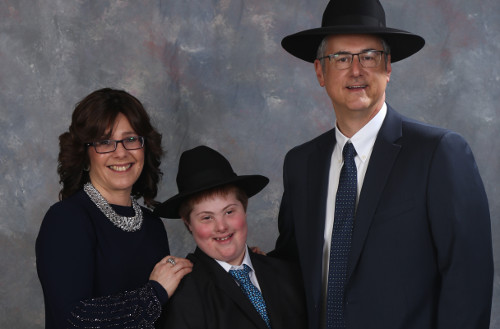 He had started preparing the leining, reading from the Torah, about six months ago and surprised us with how quickly and easily he mastered it. He was a natural pro! The task played to his strengths; Yehuda is very musical and reads Hebrew well. But it was unprecedented (in our neighborhood at least) to have a boy with Down syndrome lein and we had no idea if he’d change his mind and refuse to do it. We could only do our part, and the rest was out of our control.

It was unprecedented to have a boy with Down syndrome read the Torah and we had no idea if he’d change his mind last minute.

The big day arrived. The first minor miracle was that Yehuda got out of bed at 6:15 AM. (The second minor miracle was that his older brothers did too.) He put on his new suit and smashing black hat (no tie due to sensory issues) and with confidence and excitement he marched to shul and dovened like everyone else. The only minor setback was an oncoming cold and cough.

The shul was packed. We were surprised to see how many close friends and family made the effort to come so early in the morning. Right before his aliyah, I put my talis on Yehuda and reminded him, “You’ve got this. Remember: slow, loud and clear.” His name was about to be called and this was it, his moment of decision: do I tackle my fear and go up there or simply walk out of shul and head home for some potato chips?

His name was ceremoniously called and everyone went silent. Yehuda quickly went up to the bima, holding the silver yad, Torah pointer, that would help ensure he read every word as opposed to recite it from memory (which would not be sufficient according to Jewish law).

He aced it! Once he cleared his throat and took a second to find his groove, he did a perfect job, reading clearly, with aplomb and confidence. The feeling of nachas my wife and I experienced is hard to put into words. My kids said they had never seen me smile like that. But more importantly, Yehuda was beaming, feeling so proud of his accomplishment. (Watch his reaction at the end of the video below.)

And the accomplishment was deservedly his. We didn’t coddle him. We didn’t manufacture an ersatz experience to make Yehuda feel good. He took on the challenge, put in the necessary work and showed himself capable of accomplishing something to that which he set his mind.

After an early breakfast at our home with close friends and family, where Yehuda sat at the head of the table exuding such pride (and relief), we had a blast going bowling in the morning, beating the Passover rush.

The story could end here, and we’d all feel good reading about how one special boy with Down syndrome overcame his limitations, yada yada yada…

But the truth isn’t as rosy.

We looked forward to capping off such a triumphant day having dinner with my in-laws at the Jerusalem hotel where they were staying for Passover. This is an annual all-you-can-eat bash for our family of hearty eaters. I naively thought that after Yehuda’s spectacular and mature performance, he would behave himself at the hotel despite his viewing it as a massive playground, replete with elevator rides and a zillion secret spots in which to hide.

Within the first moment of sitting down at the table, Yehuda was already missing. My wife and I were more annoyed than alarmed. This was rather typical behavior, Yehuda knew exactly where to find us and we figured he would eventually get tired of exploring and come join us at the table (after all, one of Yehuda’s most favorite activities is eating).

We went into crisis mode, launching a futile effort looking for Yehuda who was probably joyriding in one of the elevators.

But the other guests at the table didn’t feel this way, especially my father-in-law who was getting increasingly agitated and distressed with every passing minute. So we went into crisis mode, my wife and I launching a more or less futile effort looking for Yehuda who was probably joyriding in one of the elevators. I spoke to hotel security who said they’d be on the lookout.

By the time Yehuda nonchalantly walked down the big spiral staircase in the hotel to join the family for dinner, my limited patience had been depleted and I was seething (not the right reaction, I know). My wife and I had decided that there had to be a clear consequence for his actions. I quickly ran up the stairs before he could come down and told him, “You blew it, big time. We are going straight home and you’ll grab something to eat at home.” 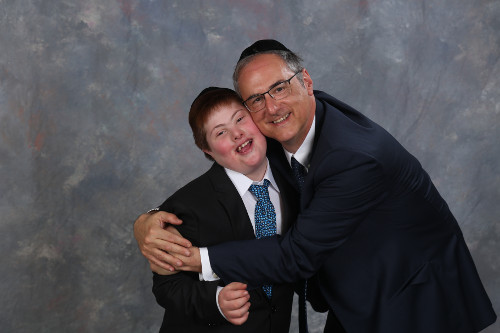 Yehuda then pulled his dreaded move of firmly planting himself on the floor and turning himself into an unmovable mountain. I had no interest in engaging in an all-out battle of wills in front on my in-laws who were already incredulous at Yehuda’s behavior and our evident lack of parenting skills. I had to get him out and into the car right away, before the meal was over and the extended family and hotel guests would start pouring out in to the hotel lobby.

Yehuda is a big boy; I can’t pick him up. Suffice it to say getting him to the car was not a pretty sight. Yehuda and I both made mistakes and it certainly was not the way I had envisioned ending such a milestone day.

However it does reflect a more realistic day in the life of raising a child with special needs. Yehuda is not an angel. He is boy full of conflicting wants and desires, and in raising him, there are times of great joy and accomplishment, and times of total frustration, bewilderment and anger.

A Simple Twist of Faith
Faith: the Axis Upon Which the Wheel of Science Turns
Love - Not Just About Chemicals Anymore!
Is There a Moral Code in a Virtual World?
Comments
MOST POPULAR IN Spirituality
Our privacy policy