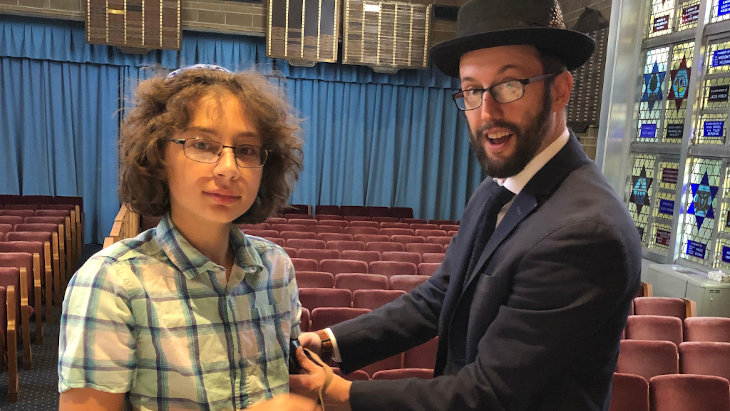 Why a Jewish teen's Bar Mitzvah journey and unlikely friendship with a Holocaust survivor gives me hope in the face of anti-Semitism.

A few months ago, I got a random email from a mother from the former Soviet Union who wanted help in preparing her son for his Bar Mitzvah. Her children never went to Hebrew school and they rarely attended Jewish services. But now that it was time for her son's Bar Mitzvah, she wanted him to celebrate his special day with his people. Every synagogue she asked turned her down. Apparently, it was "too late" to prepare him. I could feel her pain as she asked me if I would help her.

"It's never too late in the eyes of God," I told her. I promised to take him under my wing and become his guide as he claimed his Torah heritage. From that moment on, Tzvi (AKA Georgy) began coming to my Shul on Shabbat.

Tzvi is a tall, lanky boy with a wild imagination and respectful disposition. His first question to me was "How do you know God exists?" Quickly realizing how bright he was, I delved into the subject as if I was talking to a college student on campus. We spent over an hour engaged in discussion. I later found out that it was the first time he learned anything about Judaism.

Fast forward a couple of months and we were celebrating his Bar Mitzvah. My entire synagogue of Lincoln Park Jewish Center embraced him as one of their own. He started not even knowing what an Aleph was and on that special day he recited the Torah blessings with gusto. We showered him with applause, and lots of candy.

His parents had raised him to love the pursuit of wisdom. His mind brimmed with curiosity. Over the past months, we had bonded and every time he'd see me, he'd ask, "Rabbi, can I ask you a quick question?" He stumped me on more than one occasion. I felt blessed to be his teacher. 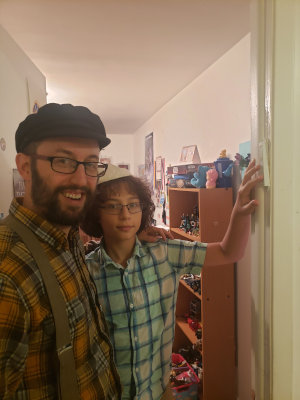 With Tzvi as he affixes a mezuzah to his room

After completing his Bar Mitzvah training, having his party, and receiving all his gifts, Tzvi's mother called me. "Rabbi, Georgy asked me if he can still take Torah classes from you. May he, please?" I think you know my answer.

I discovered that Tzvi's great grandfather had been a proud religious Jew in Russia. He was beaten to death by the Nazis because of it. The rest of his relatives were forced to hide their Judaism just to survive. But they stayed loyal to the Torah and to their God. They prayed and celebrated the Jewish holidays in secret. It was their self-sacrifice that Georgy’s mother would always remember. Her family's pride in their faith against all odds was a beacon of light for her. Their sacrifice inspired her to teach her children to always remember who they are.

And now, decades later, Georgy provided them their victory against their evil tormentors.

In the course of coming to shul, Tzvi met a Holocaust survivor for the first time in his life. In our shul we call Reb Chaim Grossman the "Angel of Westchester. He was the subject of this video and article. Tzvi approached me one Shabbat afternoon during the Kiddush. He wanted to befriend Reb Chaim and asked if I would make the introduction.

I led Tzvi to Reb Chaim and promptly returned to my table. A few moments later, I looked across the room and saw Tzvi sitting with Chaim, their foreheads almost touching as they talked with one another. The image of these two men, one young and one old, sitting across from each other while wearing their yarmulkes will stick with me for the rest of my life. One a descendent of Jews forced to hide their Judaism and endure bloody pogroms. The other forced into a concentration camp in Buchenwald and made to endure hell itself before being liberated by US troops. 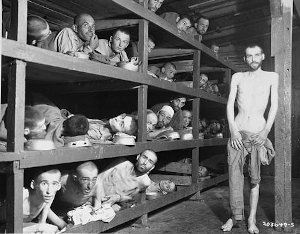 R' Chaim Grossman (3rd row, back) in this famous photo of the liberation of Buchenwald.

During Hanukkah, there were at least 13 anti-Semitic attacks in the US. Jews across the world shuddered in fear. I thought to myself, "What would the Maccabees do?" There are many legitimate responses to anti-Semitism, including increased security, inter-communal engagement, "every Jew a .22", the legal designation of such crimes as terrorism, and more. Tzvi gave me a different answer. He had another "quick question" for me. Could he make a short presentation about his friend, Reb Chaim Grossman? I sat in my chair and realized this was the answer.

The Maccabees weren't soldiers or lawyers. They were Torah scholars, the carriers of the educational torch of their people. They knew that when the oppressors of that time wanted us to forget the Torah, their response was to learn Torah and perform mitzvot with even greater dedication and self-sacrifice. To strengthen their Jewish pride.

This is the origin of the "dreidel" game which was invented by the youth who wanted to study Torah under the very noses of the occupying forces. They would learn the Torah and when they would see the soldiers coming close, they would hide the scrolls and pull out the dreidels as a ruse. The response to anti-Jewish hate is an increase in pro-Torah engagement. It’s been this way throughout Jewish history.

Tzvi embodies the lesson of the Maccabees: to never abandon one's identity in the face of overwhelming oppression.

The relative safety and security of the Jewish people today is a blip in the context of centuries of persecution, oppression, and exile from our homeland. And yet the Jewish people have persevered. As Mark Twain famously put it, "All things are mortal but the Jew; all other forces pass, but he remains. What is the secret of his immortality?" The answer is simple. It is our commitment to learn and observe Torah. This is the lesson of Rabbi Akiva who was asked for his response to anti-Jewish hate by the Roman dignitary, Pappus ben Judah. The venerable sage responded that the Jewish people are like fish and the Torah is like water. The nets of Jewish hate may surround us but, if we were to abandon the water, we would surely perish. (Berachot 61b)

Tzvi embodies the lesson of the Maccabees: to never abandon one's identity in the face of overwhelming oppression. Our future rests with youth like Tzvi, who realized the power of befriending a Holocaust survivor, who ensure that our people always remember who we really are. 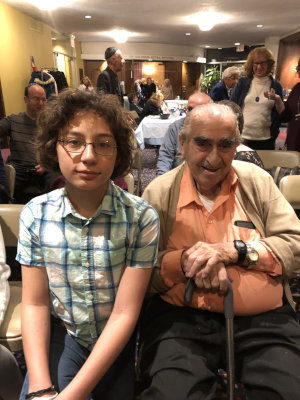 On the 8th night of Hanukkah, when the menorah shone its greatest light, Tzvi stood up in front of a crowd of people much older and "wiser" than him and gave a presentation about his friend the Holocaust survivor. I heard him speak with passion about the bravery and courage that Chaim represented for him. I saw the audience feel empowered to see a young man, not being forced to give such a presentation but feeling honored to do so. And I watched as Tzvi expressed that it is modern-day Maccabees like Reb Chaim that give him stronger faith in God.

My father taught me that the 8th night of Hanukkah holds a special power. According to Chassidic teachings, the number 8 symbolize the Divine Energy that is supernatural, the energy of miracles, of being able to accomplish that which you thought impossible. The 8th night of Hanukkah teaches us you don't have to be a "big light" to access this power, nor do you have to accomplish miraculous feats all at one time. All one has to do is to keep increasing their small light, one day at a time.

This is the secret of Jewish survival. This why seeing Tzvi standing next to his friend, Reb Chaim gives me hope for a Jewish tomorrow. For it is the youth, like Tzvi, that show us how we've defeated the darkness of anti-Semitism in the past and how we can do so in the future.

My Adventures in Saying Kaddish

Climbing the Mountain: Essay and Interview with Kirk Douglas