Orthodox Judaism in the Marvel Universe 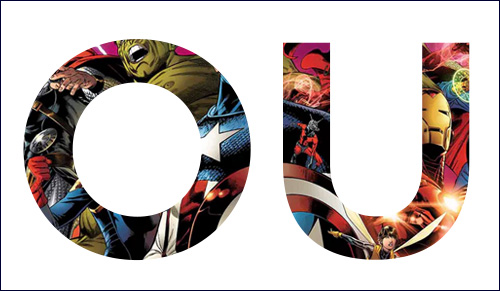 The Orthodox Union and Chabad find their place in the world of super heroes.

Since 1939, when the Human Torch and Sub-Mariner first appeared in Marvel Mystery Comics #1, one question has plagued aficionados of four-color literature: does the Orthodox Union exist in the Marvel Universe? Finally, that question has been laid to rest thanks to Ms. Marvel #25, released on December 20, 2017.

First, some background. For the longest time, all the major Marvel superheroes were a bunch of white guys. Captain America? A white guy. Spider-Man? A white guy. Thor? A white guy. Wolverine? A white guy. Iron Man? A white guy. The Hulk? A white guy who turns green. In recent years, however, things have changed. In the interest of greater representation, Marvel has replaced many of their iconic characters or supplemented them with counterparts of gender and ethnic diversity, including: a black Captain America and Spider-Man; a female Thor and Wolverine; a black and female Iron Man (who goes by the name “Ironheart” because, you know, not a man); an Asian Hulk. Part of this expansion was the introduction of a new Ms. Marvel, Marvel Comics’ first Muslim superhero.

DC Comics has not followed Marvel’s lead in replacing their flagship heroes with more diverse characters, though they did introduce a Muslim Green Lantern more than a year before the new Ms. Marvel made her debut, and they promoted Cyborg, an African-American hero, to a position of prominence as a (retroactively founding) member of the Justice League. What neither company has done, however, is introduce any new, Jewish versions of their classic heroes.

That’s not to say that there are no Jewish superheroes (or supervillains), it’s just that the modus operandi is usually to reveal that some existing character happens to be Jewish. At Marvel, this includes such characters as the X-Men’s Kitty Pryde and Magneto; over at DC, it includes Batwoman and fan-favorite Harley Quinn. (It’s just as well that Jewish characters are usually “regular” cast members revealed as such because actual Jewish creations, like Marvel’s Sabra and DC’s Seraph, tend to be unsubtle and heavy-handed.) The most famous Jewish comic-book character is no doubt Marvel’s the Thing, a member of the Fantastic Four. 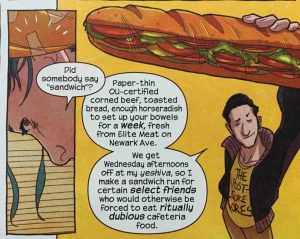 With this background, let us return to Ms. Marvel #25, which introduces the title character’s friend, the yarmulke-wearing Naftali. On Wednesdays, Naftali has afternoons off from his unnamed yeshiva, so he makes a sandwich run for himself and Ms. Marvel’s secret identity, Kamala Khan. (They lunch together because both have “weird dietary restrictions.”) On this particular Wednesday, Naftali appears bearing “paper-thin OU-certified corned beef, toasted bread, enough horseradish to set up your bowels for a week, fresh from Elite Meat on Newark Ave.” While the store appears to be fictitious, the certifying agency is most definitely real. Slam-dunk! The OU definitely exists in the Marvel Universe, alongside the likes of the Avengers and the Silver Surfer. This may be the first pop culture shout-out the OU has enjoyed since the television show Breaking Bad.

What? You don’t remember the OU being mentioned on Breaking Bad? That’s because we weren’t actually in the dialogue. Rather, the OU logo appeared on tubs of batter from series eatery Los Pollos Hermanos. (One must ask why a non-kosher chicken restaurant would bother having their proprietary batter certified kosher – the very definition of an act of futility as no one who keeps kosher would ever have occasion to eat it! Presumably, the prop masters copied elements from real-life tubs that included the OU logo.)

As gratifying as a mention in a Marvel comic is, the OU nod was completely outclassed by the shout-out that Chabad received in DC’s Teen Titans Go! #25, which was released the same day as Ms. Marvel #25. In this Chanukah-themed issue, the Teen Titans were visited by Colossal Boy, a Jewish member of the 31st-century Legion of Super-Heroes (DC Comics). The following dialogue then ensues: 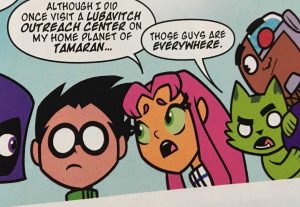 Raven: I don’t know anything about Chanukah.
Starfire: Nor I. Although I did once visit a Lubavitch outreach center on my home planet of Tamaran…
Beast Boy: Those guys are everywhere.

But it’s not about whose shout-out is better (#sourgrapes), it’s just great to see Jews acknowledged. For non-Jewish readers – many of whom may not even know a Jew – it helps to normalize us. For Jewish readers, it’s a good feeling to be included. When I was a kid, I would have loved an actual Chanukah-themed issue of a comic book and not just a perfunctory mention in a “holiday” (read: Christmas) special. And while Elite Meat may not be real, Naftali sure does make that sandwich sound delectable!

Now, if we can only get some Jews into Archie’s hometown of Riverdale – there’s certainly no shortage in the real thing!

This article originally appeared on ou.org