One Habit Can Change Everything 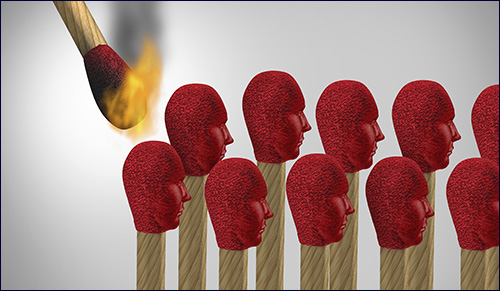 5 strategies to making resolutions that stick.

Lisa Allen was 34 years old, had started smoking and drinking when she was 16 and had suffered from obesity for many years. Her longest job had lasted less than a year, and collection agencies were constantly calling her to recover over $10,000 in debt. One day her husband came home and announced that he was leaving her; Lisa fell into a deep depression.

Not knowing what else to do and having always wanted to see the pyramids, Lisa decided to go on a trip to Egypt. On her first morning there she woke up in her hotel room and reached for a cigarette. She didn’t realize that she was actually trying to light a pen until she smelled burning plastic. Feeling more depressed than ever before, she left the hotel to see the pyramids. But when she stood in the middle of the enormous desert, something shifted within her. Suddenly she thought that maybe what she really needed was a goal, some kind of direction for her life. And so on the way back to the hotel in the taxi, Lisa decided that in one year she would return to Egypt and hike across the desert.

The idea didn’t make any sense. She was overweight, had no money, didn’t know the name of the desert she was looking at or even if the trip would be possible. But Lisa needed something to strive for, and the desert trek became her focus. And she knew that in order to survive the hike, she would need to quit smoking. So over the next six months, Lisa replaced smoking with jogging. And that one habit change set off a whole series of changes in her life. It changed how she worked, ate, slept and saved money.

When she made the trek across the desert one year later in the air-conditioned, motorized tour with a half-dozen other tourists, the caravan carried so much food, water, tents, and global positioning systems that she probably would have accomplished her goal without giving up smoking, but she hadn’t known that when she first set her goal. And by the time she made her way across the desert, her smoking habit had already been replaced. A few years later Lisa lost 60 pounds, bought a house, went back to school for a degree, become engaged and held the same job for more than three years.

She agreed to participate in a scientific study examining how forming new habits affects our brains. And researchers saw something fascinating when they looked at images of Lisa’s brain. Her old habits, detected from a set of neurological patterns, were still visible on the brain scan, but they were being crowded out and overrun by her new habits and urges. But the scans also revealed that the areas of her brain associated with addictive craving and hunger were still active. Her brain was still producing urges that made her smoke and overeat. The difference was that there was new, stronger activity in the area of Lisa’s brain where self-discipline and inhibition begin. And that activity kept getting stronger every time the scientists took a new brain scan. (From The Power of Habit, Charles Duhigg, Prologue XIV-XV – a highly recommended book)

Lisa’s story shows us how transforming just one habit can change a whole series of aspects of a person’s life. But it also shows us how careful we must be to keep fighting our old habit loops because they are still imprinted in our minds, just waiting for an old trigger to set them off once again. This is perhaps why New Year’s resolutions are so hard to maintain.

Here are five strategies to jumpstart and hopefully continue new habits for 2015.

1. Choose one habit. It takes a lot of energy to fight an ingrained habit. Choose one habit that has the potential to set off many other changes in your life. In The Power of Habit, Charles Duhigg refers to this habit as a “keystone habit” because it automatically re-programs so many other areas of our lives. Examples of keystone habits, among many others, are exercise, eating dinner as a family and eliminating an addiction.

2. Prepare new rewards. Every bad habit rewards us in some way; otherwise, we wouldn’t automatically repeat it even when we know it is holding us back. Whether a bad habit comforts us, reduces stress or alleviates boredom, we need to figure a new set of rewards that can accomplish the same goal. The rewards can be small, like a piece of chocolate or they can be more significant like a vacation planned after you meet certain milestones. But we should make a list of a variety of rewards, so that we have them on hand, and we won’t need to rely on an old habit to feel better.

3. Become aware of cues. Learn to understand what sets off bad habits. Is it a certain time of day? Is it unexpected stress? Is it a challenging relationship in your life? Is it loneliness? You can do this at first by just writing down what was happening right before you reached for the cake or the cigarette or the drink. Once you can see how often and when these cues happen in your life, you can begin to figure out a plan to respond to them.

4. Create a new routine. Having a list of all the cues in your life prepares you for the next step which is to create a new routine in response to the cue. Lisa’s cues were set off anytime she felt depressed or hopeless, and she used to respond to her cues by smoking. In order to prepare for her desert trek, she set up a new routine of jogging instead of smoking. But it is generally better to have a list of new routines you can use in case one of them falls through, and you can’t use it.

5. Make a plan. Many people are able to begin new routines and habits but find themselves regressing when they are faced with unexpected stress. Make a plan for what you will do, if and when life throws you a curveball. In The Power of Habit, Duhigg calls this strategy preparing for “inflection points” the times in our lives when we know that our discomfort and therefore, the temptation to quit will be very high. The problem is that we often don’t know when our inflection points will arise, so it is important to write out as detailed a plan as possible for what we will do when we are extremely stressed or tired or frustrated. For example, someone dealing with a temper habit can write down that he will walk into a specific room, he will count to a certain number and afterwards, he will give himself a pre-planned reward.

I once heard a motivational speaker say that if we are tougher on ourselves, then life will be easier on us. I have found that to be true; the more we demand of ourselves, the easier it is to respond to life’s demands. This is especially true when we are throwing out old habits and creating new, healthy ones. If we take one bad habit and transform it, we know now that God helps us by setting up a whole new loop in our minds that will make other changes easier. And the more we follow that new loop, the more self- discipline and strength we will find within ourselves. Just like we say at the end of each book of the Torah: “Be strong, be strong and then you will be strengthened.”

4 Ways to Deal with the Polar Vortex

Path of the Soul #1: Discovering Mussar
Who Was Josephus? The Controversial Backstory of the Famed Historian
Should I Break Up, Get Engaged or Keep Dating?
Time Is Your Precious Commodity
Comments
MOST POPULAR IN Spirituality
Our privacy policy