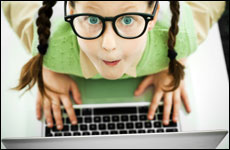 Next-generation technology is watching you. Behave, or else!

Brace yourselves, ladies and gentlemen: Geeks with a penchant for social engineering are working on a whole slew of “smart technology” that will force us to behave ourselves – or else.

We needed this news like we needed a hot bagel delivery during Pesach. After all, our lives are already controlled by technology. Who among us does not feel utterly helpless if we lose internet connection for five minutes? And how well have you survived the ensuing panic attack after leaving your cell phone home – on purpose – while you ran to the corner market for a quart of milk? Heaven help us, within a year or so everybody on the street will probably be wearing those nerdy looking Google glasses, with their tiny computers perched over the left eyebrow. They call this “wearable computing.” I call it frightening.

Who doesn’t feel utterly helpless if we lose internet connection for five minutes?

Yet all this is bush league compared to the Nanny-state stuff that’s already in the pipeline. According to a recent article in the Wall Street Journal titled Are Smart Gadgets Making Us Dumb?, there is now a trash can that snaps pictures of what you toss out and sends those photos to Facebook. This way, if you threw out too much food or if you didn’t recycle enough, everyone in your social network can know what a worthless piece of non-recyclable garbage you are. “Smart” scales can transmit your weight to your Twitter followers, making you deeply regret all the effort you put into garnering more than 2,000 of those followers. (For the record, if my scale shared my weight with anyone, I’d shoot it, which would prove that my scale was anything but smart.) Forks can monitor how fast you’re shoveling in the hash and flash indicator lights that are tech-speak for, “Whoa, fella, how about chewing once or twice before it goes down the gullet?”

Armed with sensors and programmed by artificial intelligence, even toothbrushes can scold us that we didn’t brush long enough, according to this article. My guess is that the next-generation version of this toothbrush will probably make us floss, and perhaps strangle us with the floss if we don’t comply. For good measure, the toothbrush will send pictures of us laying on the floor, tangled in floss, and send it to all our social networks too as a warning. You vill brush and floss and you vill like it, no?

I don’t mind ingenious new inventions as long as they don’t judge me and as long as they keep their traps shut. For example, I could really go for the new “smart” LG refrigerator that knows what’s inside it, tells you if your milk is going bad, and even and suggests dinner menus based on what’s inside the fridge (and supposedly not past its use-by date). As someone who often remembers to make shopping lists but forgets to take them to the market, I would also welcome the messages the fridge sends to my phone with a list of what I need restocked. My refrigerator, alas, is the old-fashioned strong, silent type. And as someone born without that Ms. Goodwrench gene, I’d also happily spring for the new “smart” Black & Decker screwdriver with gyroscopic technology that expertly screws things in for me once I get the thing going. No more screws listing starboard!

But I would hate this brainer-than-thou technology to infiltrate the Jewish world. I fear that these Big Brother innovations would only raise anxiety levels among an already anxious people. Some devices would be tempting, I admit: a credit card that automatically maxes out if you try to spend more than $10,000 on hors d’oeuvres for a bar mitzvah. A printing machine that triggers a fatal error if it attempts to produce any more novels about horrifically dysfunctional Jewish parents. Sensors that pick up lashon hara (gossip) and cause the gossiper’s tongue go all cottony.

I would hate this brainer-than-thou technology to infiltrate the Jewish world.

These would be both amusing and useful, yet the road to social engineering via “things” is too dangerous, and would only cause more tzuris. Picture the shul rabbi giving his Shabbat sermon, when a congregant boredom sensor is activated in the lectern and pushes the rabbi backward, smack into the gabbai. Isn’t the rabbi’s job hard enough already, leading this cadre of stiff-necked people? Just picture the uproar at Kiddush if a slice of marble cake that can read your weight refuses to be lifted from the serving platter if the person attempting to spear it is overweight? And don’t get me started on the wrath of a Jewish woman innocently trying to purchase some canned tuna at the market, when the wheels of her Kosher shopping cart lock on that aisle, also home to the canned pork and beans. Oy gevalt!

Like you, I don’t want my stuff telling me what to do. I’d like to think that I’m still the boss of my oral hygiene implements, my refrigerator, and even of my recycling bin. And why are these engineers working so hard to develop artificial intelligence when we are so lacking in human intelligence? These people ought to get their priorities straight.

I wish we could just ignore this trend and vow not to buy this “smart” stuff, but naturally, it won’t be that easy. Some auto insurance companies already offer price breaks if you allow sensors in your car that report your driving patterns, including how fast you drive and how hard you brake. How long do you think it will be before health insurance companies insist we all wear pedometers, the better to see if we’ve taken our mandatory 10,000 steps a day?

I say, give me liberty or give me a one-way ticket to a remote island somewhere, far from Silicon Valley and all their creepy inventions that would keep me from living life the old fashioned way, you know, by making my own choices.

We Jews already know how to live the right way because the Torah has given us 613 very helpful mitzvot to map our paths. We even know how to save the earth! I know: that’s a lot of mitzvot, but I think it’s a breeze compared to living in a world of finger-wagging, sensor-emitting, light-flashing, gadgets, gizmos, prescription pill bottles (they go “ping!” when you’re running low), and tiny computers that will shame you publicly if you make a “wrong” decision. Best of all, it’s based on Divine, not artificial, intelligence.

Come to think of it, maybe if those Google glasses include an upload of a Torah app, I might be more open to it.

Jew in a Box