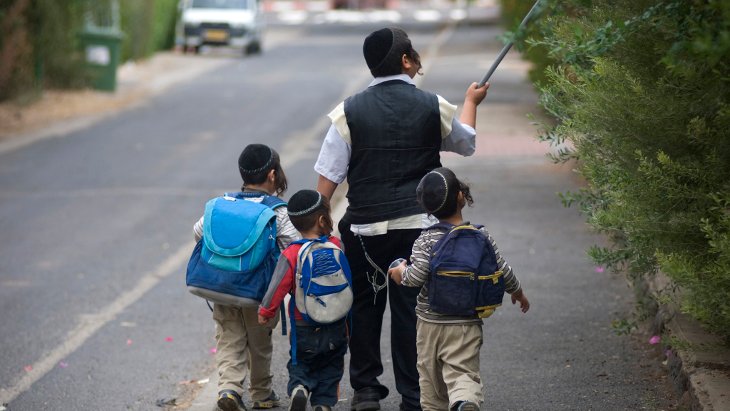 Beware, it all starts in kindergarten…

School has started. Finally. You bought the notebooks and pencil bags, but did you really prepare your child for Jewish school? Do your children really know what to expect? Are they ready for the hard world of kindergarten?

In case you missed the boat, here are some of my own personal pearls of wisdom. Please note, I don’t have children so I have no idea what I’m talking about.

Teach Them the Aleph Bet Young

Kids get a reputation early. You’re deemed brilliant or not fit for a decent education based on how well you can sing Adon Olam. You show up and don’t know the Alpha Bet, you end up in the second tier Talmud class, and then you don’t get that job as an engineer. It all starts in kindergarten. They brand you. So, make sure your child has the Aleph Bet rolling off his tongue ASAP or else you best invest in a specialized tutor. Preferably a high priced one.

I didn’t learn the Aleph Bet till I was six. And for that reason, I am still bad at speaking Hebrew and can’t get a job as a surveyor in Israel.

Get Your Child Up on Their Tracing Abilities

Even more important than your kindergartener knowing the Aleph Bet is their ability to trace it. Penmanship and artistic ability dictate your child’s language skills.

Tracing will push them up to the smart class right away. Forget about knowing the language. Can you trace it?! That’s how we decide if a kid is smart in elementary school; tracing letters and filling out circles with a number two pencil. Not everybody can write a Hebrew essay at five. I still can’t. Even so, my little niece can trace a Hebrew essay like nobody’s business. She’s going to be a somebody someday.

Get Them Physically Ready

Your child is in Jewish school. They better be prepared for action sports, like kickball and nukem. Recess is not for the weak. You may want to help your child advance faster by helping them develop their paper football skills. Kicking a paper triangle made out of paper towel, with your finger, through someone’s fingers, is a skill that might have your child playing floor hockey one day. It’s all about preparing them for advanced athletics where you, as a parent, don’t have to worry about them getting injured. There is a reason we Jews don’t push our children into ice hockey. You never know when that ice will melt. It could get very slippery. There is always a reason to worry.

Take Back Every Political Statement You Ever Made

Your child will be sharing all of your beliefs in class. They repeat stuff. You want socialized medicine, every teacher in school will know that by the end of next week. You don’t know why Bibi Netanyahu is still running, the whole class doesn’t know why you care so much. Kids are like political snitches, repeating everything you say, tattle tailing to the school administration about everybody you ever voted for.

The Shabbat dad and mom, as played by your child twice a year, in kindergarten is critical. They make Kiddush and lead their class in a pretend meal before Shabbat. You don’t want to get embarrassed by your five your old who doesn’t know how to lead a family of twenty-two in the blessings of the meal. That lack of preparation in being a dad shows slow development.

Need I say more? Your child’s social reputation is dependent on the insignia on that bag. Make sure you got some good Uncle Moishy paraphernalia.

Make Sure Your Child Knows What Kickball Is

If your kid doesn’t know how to kick a plastic ball and run around bases, they’re not going to make it in Jewish school. There are societal standards your child will have to live up to. One of those is baseball played with your feet and no bat. It’s just that simple.

Make sure your children are cool and have the new styles down. Jean skirts are not a thing anymore. You can’t keep on forcing the hand-me-downs on the kids, unless it is a smock. Today it’s all about skinny pants. Apparently, you don’t have to be skinny to wear skinny clothes. Clothes that stick directly to the human are in with Jewish teens. Your child will also need Kicks. Kicks are what you call sneakers when you are paying over a hundred dollars because an NBA player has them.

Wean your children off candy. Teach your child to lick honey off of paper and they will be knowns as the most religious kid in the class. Even if they are not smart, at least they will have a place in heaven.

Tradition is to put honey on the first words of the Torah and to have the kid lick that, teaching the children that Torah is sweet. You may want to start early by having your children licking paper at home so they will be considered smart right away.

Hug Them A Lot

Give Your Kid a Problem

Every kid in school must have at least one issue. You involved in every aspect of their life can be the issue. Your hugging them onto the bus everyday may or may not be helping them.

If they were diagnosing when I was growing up, I could’ve been a somebody. I needed an excuse. When I was a kid, I was just deemed bad and not smart. Definite ADHD: I always got bored when things weren’t interesting. Social Issues: I always got into fights with kids that were not nice and every time I played kickball. Slow Reader: I can’t even keep up with the subtitles at the movies in Israel now. And it all started because I couldn’t trace the Aleph.

So make sure your child is a success and makes it as a top surgeon or partner in a law practice, and prepare them for Jewish Day School with tight clothes, tracing abilities, and paper football flicking skills.

The Bubbie Diaries
Saadiah Gaon, Rashi and Maimonides: How Three Rabbis Revolutionized Judaism
King Sennacherib and the Siege of Lachish
Three Small and Easy Changes to Add Positivity in Your Home
Comments
MOST POPULAR IN Jewlarious
Our privacy policy
Aish.com Is Looking for Great Writers