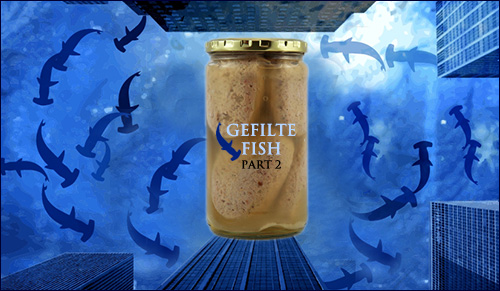 Suze Essenfeld bought into the Krankheiter – a thermometer that tells you when you are not sick.

In part one, we looked at the Gefilte Tank, our Jewish version of the hit show “Shark Tank” where a panel of self-made machers can invest and turn a Jewish genius or meshuggenah with an idea or an invention into an entrepreneur rolling in gelt. Face it. Our personalities are fueled by thousands of years of DNA. So, while gentiles are inventing things that could give us tzuris, like space age rock climbing boots for scaling Rushmore, or bacon lobster bits in easy to open cans, do we need this? Pui!

A panel of self-made machers invests in Jewish geniuses and creates entrepreneurial gelt.

We have our very own WOW-factor creations Jews to make life easier, happier (but not too happy), while raking in millions of shekels, as the Gefiltes will do what we Jews have always done: invest and use their connections!

1. Suze Essenfeld: Not only is she the infomercial queen who just launched her newest hit, the Jewish Dating Site: “O-U,” but her best friend is Ron Popeil, the Jewish Canned Hair King, whose expression: “Wait … there’s more …” just hit the 101 billion mark on www.infocliches.com beating McDonalds “Over 100 billion Served.”

2. Alan T. Piker: The Highway Macher, who made his fortune creating signs for turnpikes brings his close connections to Sol Mitwin, inventor of the modern “Arrow” and “STOP” signals used in 49 States. (New Jersey is still a hold-out.)

3. Charles Shmutzger: the man who turned streets of shmutz into gelt, is tight with Natan Natonski, whose family claimed they technically owned 1/3rd of the sand in the Negev. The Israeli government’s ruling was “Feh!” but gave him a contract to pave half the streets in Haifa to keep the peace.

4. Ruth Shpelnik: creator of the first faux labels for high-end shmattes brings her bffs; machers in the design world who were so narcissistic they were flattered by her knock-offs or have a twisted sense of humor.

5. Milton Zuckerfleigel: (a.k.a. The Fowl Man) the genius behind the huge Frum FLEIGFOWL offers his connections to CEOs of Kosher Vending Machines and wig makers in China.

THE MATZOLATOR. “Mighty” Pincus Perfektowtiz is asking 10 million for a 2 ½ % investment. He has brought along his cousin, the famous Jewish chef, Challa Cholentski to convince the Gefiltes.

Pitch: “Hi, Gefiltes. Ready for a little strait-talk about our bread of affliction: Matzo? No Pesach is complete without it. Yet for all its wonderful history, never mind the leftovers for matzo brei, when you break it, it makes shmutz that even a Super Swiffer and the Queen of Balabustas can’t swoop up. To explain better, I’ve brought you a surprise person. So put your hands together for the world famous chef Challa Cholentski who not only started the IMPS (The International Matzo Preservation Society), but beat Bobbly Flay in the Kugel Challenge!”

SHE ENTERS THE GEFILTE TANK TO WILD APPLAUSE

Challa: “Hi Gefiltes. By the way, Ruthie, I hoped you liked the brisket I made that you told the Netanyahus, never mind Adam Sandler and Mayim Bialik, you made yourself? Anyway … as a professional chef who works closely with matzo, who has time to Swiff? No one, that’s who. Until my nephew ‘Pinky’ who always showed genius solved the problem, 1, 2, 3! Pinky, mamala, explain!”

Pinky: “Thanks Tante! The problem as we all know are the perforations. Not one person has ever broken a piece straight – until now! My Matzolator, with its patent pending process is our single aluminum needled Matzo Perforator Trigger Stick (MPTS) and Cushion Clasp. Simply put one matzo at a time on the cushion, and needle your way to a perfectly perforated crumbless matzo. If you want our patent pending Platinum model, you get two needles and a cushion hand grip with a trigger finger glove. Not only will your matzo be the talk of Brooklyn and Miami, it’s a perfect holiday project for the whole family. Of course the Matzolator should not be used by children under three without adult supervision, those who have consumed more than two cups of KosherKoffee, or others who suffer from JIC (Jewish Incoordination).

So, who wants to join me on my mission to Perfect Perforations?”

While Charles Shmutzger was intrigued, he couldn’t think of ways to recycle the leftovers and make his gelt back before the Messiah comes.

Pitch: “My dear friends and colleagues, who among us hasn’t pooh-poohed – whether it’s to ward off demons and, please God, protect the good mazel that comes our way … granted, on a rare occasion? Oy, but the potential for an allergic response from our loved ones is staggering. In our valiant effort to protect, we may infect! Do you know what’s in spittle? Bacteria! Viruses! And other meshugoss. Suppose for example, Uncle Shmooie just ate lox mit onions? Not a good pooh. The shtink alone, can make you khalosh! So, how can we pooh in total confidence? With my patent pending Antiseptic Pooh Saliva System, which I call the APPSS! You feel the need to pooh? Now you can spit into our bacteria-free, sensor tube – a double-barreled charcoal filtering device that makes your saliva germ-free and antiseptic. A dybbuk might be around? Feel a pooh coming on? Just take out your hendy-dendy patent-pending APPSS, and pooh away, knowing your loved ones are safe from environmental and your personal shmutz. Better, the Technion in Israel has just confirmed that our charcoal is to dybukks as Kryptonite is to Superman!

So, who will join me in making the world Pooh-safe for our fellow MOTS?

Milton Zuckerfleigel: (a.k.a. The Fowl Man), who suffers from msyophobia since his Tante Bella shripzted him after a blow-out at the Carnegie Deli and he developed a rare case of pastrami pox, took a flyer on Sheldon … for 52%.

Pitch: “Oy Gefiltes. Admit it. We Jews don’t feel so good on a regular basis, right? Show me one Jew who says: “Great” when a person asks “So nu, how are you?” The average MOT will say “Don’t ask” or “Feh!” Face it, we’re either plagued with pain, worrying when the pain will start, or waiting bravely for a bad sign that it’s starting. I ask you, is this a way to live? OK, yes. According to research done by Dr. Moishe Meshugawitz who trained in the renowned Richard Lewis Clinic in Last Chance, California, we suffer from the WeGaveAlready phobia. His theory? We Jews create illness and doom, so the dybbuks will go looking for a peppy gentile. No more! Thanks to my trust fund, I created the patent pending Krankheiter; the only digital thermometer with voice recognition that tells you when you’re not sick. Imagine a device able to check the important signs of health, such as your gas level, palpitations, excessive allergic reactions, lumbago, and yes, even over-worry! Just stick the blue end in your ear daily and you will hear a warming voice saying: “Darling, you’re not dying, at least today. Enjoy!” Should you doubt, our patent pending VRS (Voice Recognition System) will argue the case in any one of four languages: English, Hebrew, Yiddish, and Ladino as follows: “I don’t care what your plumber says! You’re fine! But you’re such a krank even I don’t want to be in your ear!”

Suze Essenfeld a chronic krank, bought in at 5% saying it will sell like hotcakes on the Jewish Shopping Network, especially when Boris mentioned she looked “a bissel schvitzik.”

ManSpeak Vs. WomanSpeak 2
Saadiah Gaon, Rashi and Maimonides: How Three Rabbis Revolutionized Judaism
King Sennacherib and the Siege of Lachish
Three Small and Easy Changes to Add Positivity in Your Home
Comments