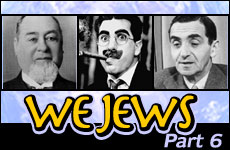 You may know some of the headlines, but now you can get the rest of the story…

Is there an MOT who doesn’t know that "Give me your tired, your poor, Your huddl'd masses yearning to breathe free," inscribed on the Statue of Liberty, from “The New Colossus,” was written by Emma Lazarus?

But more: Poor Liberty, donated by France, was a little too liberated. It sat in pieces! In 1883, a poetry auction was held to raise funds for its assembly. Walt Whitman and Mark Twain entered, but the highest bid, $1,500, went to "The New Colossus!" by Lazarus, the young poet, activist and Zionist. Five years later, in 1888, Lady Liberty took her place in New York harbor, a year after Lazarus died at 38. But her inspiring words were inscribed in the Statue in 1903; a timeless expression of hope for the immigrant.

Enjoy these fascinating, poignant, hysterical, and unbelievable Jewish “stories behind the story”

Over the years, I’ve come across thousands of fascinating, poignant, hysterical, often unbelievable “stories behind the story” just like that one above. Below, are some of my faves:

Jewish “genes” begat American jeans, thanks to Levi (Loeb) Strauss. The Jewish peddler, who arrived from Germany in 1851, was called “the egg eater” by the Cherokees as kosher peddlers subsisted on eggs (and veggies).

But more: When he was invited to the White House, security inquired as to what was in his case. Benny quipped it was a machine gun. The marine smiling, said, “You can pass, then. For a minute I thought it was your violin.”

The diminutive Jewish mama of relationship advice, known as Dr. Ruth (Westheimer), was born Karola Ruth Siegal in Frankfort, in 1928. Sent to a Swiss school during the Holocaust, she never saw her family again, assuming they perished in Auschwitz.

1888: Siberia, Leah and Moses Baline had a son, Irving who grew up to be one of the world’s foremost composers, Irving Berlin. The family, running from the Cossacks, came to New York. After Moses died of overwork, Irving (Izzy) quit school at eight to peddle newspapers, hoping to get mama a rocking chair. Izzy also sang in saloons, accompanying himself on the black keys.

But more: A printing error on sheet music anointed him, “I. Berlin.” The ragtime creator who composed “White Christmas” got mom a new rocker and a mansion — but continued to compose in only one key— F sharp.

But more: As he always numbered page 13, “12a,”every anniversary of his death is “observed” as “May 12a.” His will also stipulated: “Preserve your Yiddishkeit. I don't want any monuments. If people read my books, that will be my best monument.”

He Was No Pigeon!

But more: He launched his illustrious career dispatching news — with homing pigeons! In 1849, his pigeon post service bridged a gap between Germany and Belgium. In 1851, he moved to England, “upgraded” his service and his rep when his news agency relayed a speech in 1858 by Napoleon 111. For his noble contribution, he was eventually made a baron!

Born in 1883, the spiritual genius Franz Kafka was unsung in life.

But more: Before his death at 40 from tuberculosis, he asked friend Max Brod to burn his work. Brod didn’t -- and Kafka never knew his name would be so universally known it became an adjective -- “Kafkaesque.”

But more: In the pioneering days of TV, he wore his Yiddishkeit openly, using words on TV such as “kishkas.” He even referred to “Sukkot” in front of 1950s America.

But more: Little did they know it would become an institution. By 1939, Eleanor Roosevelt served them to King George VI. Said Nelson Rockefeller: "No one can be elected in N.Y. without having his picture taken eating a hot dog at Nathan's."

The greatest magician and escape artist of all time, Harry Houdini (Ehrich Weisz, Budapest, 1874), the third child of a rabbi, died on Halloween, 1926, at age 52, apparently of peritonitis. But his legend continues.

But more: For 10 years after his death, wife Bess attempted to contact him through a code-word --but never heard from him. In 2006, magician William Kalush and writer Larry Sloman in The Secret Life of Houdini suggested Houdini was a spy, noting he was mentioned in the diary of British spy, William Melville. They claim that Houdini, his career as cover, gained information for Scotland Yard and the U.S. Secret Service. And, he may have been murdered – which would explain his “code of silence” in the afterlife!

Eddie Cantor (Isidore Itzkowitz), born in 1892, raised millions of dollars for many Jewish causes. His tireless work on behalf of Israel earned him the affectionate nickname, the “shnorrer.”

But more: The banjo-eyed comic, at the behest of FDR, organized a drive to raise funds to fight polio – by asking each donor for ten cents -- and coined the term, the March of Dimes! A P.S. At age 15, the impoverished orphan on the Lower East Side was friends with one Kitty Brookman, age 14. And what of Kitty ... ? She later married someone else and gave birth to -- Mel Brooks!

The Marx Brothers were film ground-breakers ...

But more: Groucho Marx corresponded with literary giants T.S. Eliot, James Thurber, E.B. White. Once, when a fire broke out in a vaudeville house, Harpo calmed the crowd by reciting his Bar Mitzvah speech.

Mary Debra Winger, born in Cleveland in 1955, is the youngest of Robert and Ruth Winger’s three children. She dropped “Mary” and went on to star in Urban Cowboy and Terms of Endearment. Prior, she was Wonder Girl on T.V., and hers was one of the two voices mixed to create E.T.!

But more: In 1971, she worked on an Israeli kibbutz and spent three months training with the Israeli Army!

But more: Marcia “Baba” Lieberman, his Yiddishe mama, played matchmaker for “machers” – and sent food. “Baba” invited Al Gore over for a little cake and coffee, and sent reporters care packages with bagel chips, postcards (to write their mothers ), with the following handwritten note: "Please be kind to my son! Enjoy. Marcia Lieberman (Joe's mom!). "

WouldJew Believe?
Don’t Believe in Other Gods Versus God is One
Seeing Without Eyes
Why Shouldn’t We Eat Whatever We Want?
Comments
MOST POPULAR IN Jewlarious
Our privacy policy
Aish.com Is Looking for Great Writers