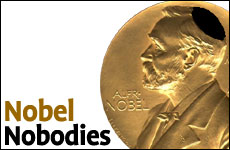 5 Jewish geniuses were just awarded Nobel prizes. But sadly many more were rejected.

The Nobel Prize is an annual, international prize first awarded in 1901 for achievements in Physics, Chemistry, Physiology or Medicine, Literature, and Peace. An associated prize in Economics has been awarded since 1969. Between 1901 and 2011, 850 laureates have been awarded Nobel Prizes. Of these, at least 170 have been Jews. That’s 20% of the total. Talk about being the Chosen People! This is an amazing accomplishment of which we Jews can be extremely proud. In fact, for 2011 alone, five Jewish laureates were awarded a Nobel Prize: Daniel Schechtman, Saul Perlmutter, Adam Riess, Ralph Steinman and Bruce Beutler. Congratulations to them all.

With that in mind, I have decided to pay tribute to these men and women who have been at least considered for the Nobel. They may not have won the big Prize, but at the very least, they deserve our gratitude and some time under the spotlight.

Here, then, is a representative sampling of Jewish geniuses who have been rejected for the Nobel Prize in the various major categories:

Dudel Baumstein’s invention of the iSteth was passed over as a winner in the Nobel Prize for Medicine category. The iSteth is a stethoscope that allows doctors to not only listen to their patients’ heartbeats, but also to their favorite CDs, podcasts, comedy routines, Broadway musicals, TV broadcasts, road conditions and radio shows from other countries – as they examine their patients. Baumstein is a self-described “multi-tasking doctor” who got the idea from his habit of listening to DVD recordings of Yiddish theater while examining his patients. Baumstein is now developing the iGlove, a rubber examination glove that massages both the person wearing it and the patient being examined.

When Miriam Himmelfarb, was 8, her aunts, Rivka and Fruma, had a huge falling out. Fruma accused Rivka of stealing her famous Passover egg noodle kugel recipe. Rivka denied it and called Fruma a paranoid busybody who was lucky that her children didn’t starve during Passover!. The two stopped speaking to one another, refused to be at any family gathering if the other was there, and if one of their names came up in conversation, the other would answer only, “She’s dead to me.” Leave it to Himmelfarb, 20 years later and now a practicing psychotherapist, to talk both Rivka and Fruma into meeting with one another along with Himmelfarb, who successfully brokered the peace at that meeting. None of the relatives could believe it, much less Rivka and Fruma themselves, who are today close friends once more, although Fruma recently confided to her book discussion group, “I can forgive, but I can’t forget.”

When Yitzhak Garfinkel’s mother, Esther, announced she would be starting a new diet which would prohibit her from enjoying her beloved cheese blintzes, young Yitzhak couldn’t help noticing the sadness in his mother’s face and voice. And he hated seeing his mother unhappy. He vowed, then and there, that he would find some way to allow his mother to enjoy her cheese blintzes without compromising her weight – even if it meant his becoming an expert chemistry researcher and discovering the chemical make-up of a cheese blintz, getting it into a gas form, and providing his mother with a pressurized tank full of it which she can breathe in through a gas mask strapped to her face. Which is exactly what Yitzhak did. Today, Esther is slender and happy, Yitzhak is thrilled (except for not winning the Nobel), and the world is all the richer for having the chemical formula for cheese blintzes. (Ch4Z2Bl3N2TS1).

So brilliant was Zipporah Bronfenbrenner throughout her high school and college years, that even her yearbooks described her as a “future Nobel prize winner.” So, it came as a shock to all who knew her when she was rejected year after year for her groundbreaking Spouse Collateral Economics System. The SCE System works this way. Say you’re starting a business and need a loan. And say when it comes time to put up your collateral, you have none – no house, property, stocks, bonds, or valuables of any kind. All you have is your spouse. That is plenty, according the the SCE System. You put your husband or wife up as collateral. What this does is give you extra motivation to make the business a success. If it tanks, however, the bank or lending institution acquires ownership of your spouse, who then must work for the institution for the next ten years. Incidentally, Zipporah is newly divorced and her ex-husband, Mordechai, a clerk at Wells Fargo Bank, hopes to gain his freedom in 2021.

In college, Herschel Klotz took an American literature course in which he read F. Scott Fitzgerald’s classic novel, “The Great Gatsby.” Although, Klotz loved it, he couldn’t help thinking, “It wasn’t Jewish enough. I wondered if there was a way to make it more Jewish-friendly for my parents, relatives, rabbis, etc.,” Klotz recalled. He proceeded to do just that, and three months later handed in a manuscript to his professor, titled, “The Great Ginsberg: A Jewish Re-imagining of Fitzgerald’s Classic.” He received an A. That inspired Klotz over the next decade and a half to turn out over a dozen Jewish versions of classic American literature, including, “The Adventures of Huckleberry Finnstein,” “The Lox of Wrath,” “Gone With the Moyle,” and what many consider Klotz’s masterpiece and the definitive Jewish take on “Moby Dick” -- “Mendel Dick.” Not satisfied merely with his Jewish transformation of literature, Klotz is making a foray into the world of cinema with his upcoming script, “Indiana Shmuel and the Temple of Guilt.”

Conservation Conversion
Don’t Believe in Other Gods Versus God is One
Seeing Without Eyes
Why Shouldn’t We Eat Whatever We Want?
Comments
MOST POPULAR IN Jewlarious
Our privacy policy
Aish.com Is Looking for Great Writers