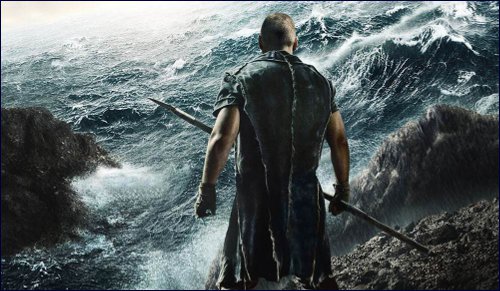 The movie is a distortion of the Torah.

With the release of its new biblical blockbuster Noah, Hollywood has once again proven it knows all too well the secret of the one animal singled out for greatest contempt among all the different species identified as non-kosher.

Do you know why the pig has always been the personification of the forbidden food we are most warned against consuming? The rabbis explain it’s because every other animal that is not kosher lacks the two signs, split hooves and chewing its cud, that are both necessary to identify it as permissible. A cow is an example of an animal that fulfills both requirements, and is thus kosher. A horse is not kosher because it fulfills neither. There is only one animal in existence that seems kosher because it has split hooves, but is really not kosher because it doesn't chew its cud – and that is the pig.

The pig is the one animal that presents us with a kosher façade. It thrusts its foot forward as if to present credentials of divine approval, all the while withholding its concealed characteristic that renders it forbidden.

It is the hypocrisy implicit in the pig’s desire to mislead us that explains why it has rightfully gained the distinction of being regarded as the most repulsive of all in the category of the non-kosher.

And that, to my mind, is the real offense of Darren Aronofsky’s $130 million version of Noah and the story of the flood as supposedly recounted in the book of Genesis.

Americans in the main are a people of great faith. According to the most recent Gallup poll, more than 90% believe in God. Eighty percent consider the Bible a sacred work. Those are surely very tempting numbers for Hollywood moguls searching for “kosher themes.” Make the audience feel they are involved with something spiritual, that going to see a biblically-based film is almost as good as attending a religious service – and the moviemakers can rest assured they will reap obscene profits even as they can feel free to create whatever Hollywood revisions they choose to make the story more interesting, more “contemporary,” more romantic, and of course more marketable.

Then again, most people don’t really know the story as it appears in the original Torah version. No harm then, the producers admit, in making some “minor” alterations. And for those who might be troubled by these revisions and adaptations, Paramount Pictures added an advisory to the film that stated, “This was only inspired by Noah, and ‘artistic license’ has been taken. ... The biblical story of Noah can be found in the book of Genesis.”

As for those who never saw the advisory to the film and were led to believe that they were now privileged to see a version of the true story that would let them skip ever studying it in the original…… Well, guess you can’t please everybody!

In a revealing interview with the New Yorker magazine, writer–director Darren Aronofsky shared his motivation in doing the movie with these words: “There is a huge statement in the film, a strong message about the coming flood from global warming.” Aronofsky told other entertainment reporters: “It’s about environmental apocalypse which is the biggest theme, for me, right now, for what’s going on this planet. ... Noah was the first environmentalist.” And the reason for God’s anger with the world in Noah’s time that prompted the decree of divine destruction? Because Neolithic man was destroying his environment – although how he was able to do so without the carbon emissions resulting from a highly industrialized society is never explained.

The flood is made to appear as nothing more than a response to mankind’s refusal to take the message of the “go green” movement seriously.

Forget about the emphasis the Torah put on corruption and violence, or the fact that the first 10 generations never properly understood what God would later codify on the second tablet of the Decalogue summarizing the ethical responsibilities of man towards fellow man. “Now the earth was corrupt before God. And the earth became full of robbery. And God saw the earth, and behold it had become corrupted” (Genesis 6:11 – 12). But for Noah the movie, the flood is made to appear as nothing more than an Al Gore inspired response to mankind’s refusal to take the message of the “go green” movement seriously!

Granted, the digital recreations of the animals boarding the ark and the special effects involved in producing the flood are truly extraordinary. And for those who love science fiction, the “Watchers,” supposedly the fallen angels of Genesis who assist Noah in the building of the ark – and in keeping the multitudes away from it when the flood begins to make its appearance – make for fascinating viewing. But they have as much to do with the real story as UFOs or men from Mars.

And pity poor Noah for the way Aronofsky – in the person of Russell Crowe – chooses to depict him. For the Bible, “Noah was a righteous man, he was perfect in his generations; Noah walked with God” (Genesis 6:9).

True, some traditional Jewish commentators found in these very laudatory words the possibility of a divine criticism. “He was perfect in his generations” led some rabbis to conclude that only by comparison to the others in his generation of evildoers was he praised, but were he to have lived in the time of Abraham he would not similarly have stood out for his piety. Yet the words still attest to a righteous and perfect man who walked with God. Noah spent over a century building the ark publicly precisely so that people would ask in wonderment what he was doing and so that he might then warn them of the consequences of their evil actions and hopefully turn them to repentance.

How embarrassing to see the feverish, self-righteous and almost maniacal Noah portrayed on the screen – a man so deluded by a supposed mission from God that he comes seconds away from murdering his infant grandchildren. Viewers come away with the image of a man guided either by hallucination or obsession – a theme shared by several other films by Aronofsy, such as Pi, Requiem for a Dream, The Fountain and Black Swan.

The Noah of the movie is not a depiction but rather a distortion of the Torah figure chosen to be spared by the Almighty and with his family to begin the story of mankind anew. To know that millions of viewers, after seeing this film, will internalize Russell Crowe’s Noah as well as many other parts of the film’s storyline that have no basis in the Bible or any other reputable sources should be cause for much concern by all those respectful of Torah and the guardianship of its truths.

It was precisely in this spirit that the prophetic sages of the Jewish people years ago proclaimed the day of the first translation of the Torah into another language, the Septuagint, as a day fasting. What troubled them was that a translation might become considered as much the word of God as the original text. Just imagine how they would’ve felt about a film that transforms a biblical story into a work of personal imagination with a contemporary agenda that bears no relationship to the original.

Noah would be a far more honest film if it clearly severed any connection with the Torah story which it obviously felt no obligation to faithfully replicate. Frankly, if it were just called An Old Man and a Flood I might even be willing to recommend it.