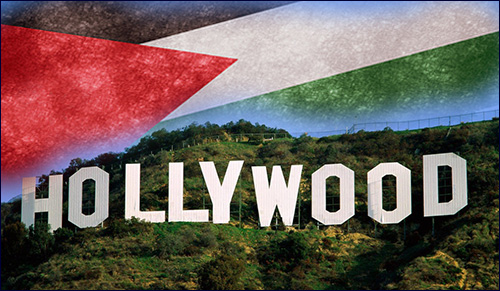 Be careful what you wish for.

Hollywood has gone gung ho for Hamas and the Palestinians.

Academy award winner Javier Bardem and his popular actress wife Penelope Cruz who cosigned a letter with over 100 other celebrities condemning Israel for committing acts of genocide (!?) are but a small segment of the movie industry’s elite proudly proclaiming their identification with the Palestinian cause.

It is a self-understood given in the Hollywood community that Israel is the villain in today’s world. Those who openly support it find themselves ostracized and, unless they are super A-listed stars, unemployed. Pity poor Simon Cowell, the English born producer of American Idol and The X Factor fame, who donated $150,000 to the Friends of the Israeli Defense Forces, an organization formed by Holocaust survivors that pays for the education and care of Israeli troops and supports families of slain soldiers, who wasn’t aware of Hollywood’s rules for how to be a liberal in good standing. For this transgression he continues to be vilified and the recipient of tweets such as this one which obviously comes from an extremely sensitive liberal profoundly pained by Cowell’s generosity to those despicable Israeli Jews: “Simon Cowell, I hope you burn in the pits of hell and your children and family suffer what Palestinians do under the hands of butchers.”

What strikes me as most remarkable of all is that Hollywood has taken sides with precisely those people who represent the greatest threat to its culture, its values, and its continued existence. There is a beautiful and profound Spanish proverb that warns us, “Be careful what you wish for, for you may get it.” Oscar Wilde put it this way: “When the gods wish to punish us, they answer our prayers.” So let’s help Hollywood write the script for what would happen if they indeed had their prayers answered and Hamas and its ideology prevailed.

Let’s help Steven Spielberg and all the other Jewish producers, directors, writers, actors flee for their safety.

First, let’s help Steven Spielberg and all the other Jewish producers, directors, writers, actors, agents, and anyone else connected with the movie industry immediately flee for their safety. Let’s remember that the charter of Hamas asks not just for the destruction of Israel and all of its inhabitants but for all Jews who by definition are infidels, to be slain for their faithlessness. And if you think that those are mere words in the charter that aren’t meant to be taken literally, please recall that’s exactly what people said about Adolph Hitler’s carefully outlined plans for the Jews in his masterwork Mein Kampf - before he scrupulously went to work to fulfill what he so clearly promised.

So try to picture a Hollywood without Jews. But of course it doesn’t end there. The Arab world knows the slogan well: First we take care of the Saturday people, next we’ll take care of the Sunday people. To be fair, we need to warn Christians as well.

Exaggerated? A long time ago, the Bible tells us that God sent the prophet Jonah to the city of Nineveh with the warning that it might soon be destroyed for the sins of its city. Thankfully then its inhabitants listened and repented, so they were spared. Today that city of Nineveh is known as Mosul, the second-largest city in Iraq. Just a few weeks ago the tomb of Jonah was violently desecrated and destroyed by members of ISIS, an extremist Islamic group.

Here’s what happened next: The Islamic State (IS) that today occupies large regions of Iraq and Syria, issued an ultimatum on July 17 to the remaining Iraqi Christians in the city of Mosul. The Christians were given three choices:

The ultimatum added that IS leader Abu Bakr al-Baghdadi decided to allow Christians who did not agree to convert or pay extra taxes to leave the northern Iraqi city by noon Saturday, July 19. After that, the message said, “The only option is the sword.”

My Meeting with the Pope

Some years ago, I had an opportunity to personally meet with Pope John Paul II on a mission with regard to Jewish items presently in the possession of the Vatican. I subsequently conferred with a number of leading Cardinals. I was frankly surprised by their willingness to cooperate when I had been told that previous efforts had often been coldly rebuffed. In private conversation with some of these Christian leaders I asked what was responsible for this new attitude. I’ve never yet publicized their response but in light of current events I believe I have both a mandate as well as permission to do so. “Because of what is happening in the Islamic world today, we realize,” they told me, “we share a common enemy. For them, both you and we are considered infidels.”

We share a common enemy. For them, both you and we are considered infidels.”

So let me add to my warning to Hollywood that not only Jews but Christians as well are seriously endangered. And if they do not as yet accept the reality of a physical threat, perhaps they ought to take greater note of some cultural aspects of the Palestinian world of which they seem now to be so enamored.

Parallel to the summary executions of Christians and people associated with the Syrian or Iraqi regimes, the IS Jihadists began applying in their “Caliphate” the toughest interpretation of Muslim jurisprudence in relation to punishments administered to Muslims and non-Muslims.

In the territories of the IS smoking is forbidden as well as listening to music and is summarily punished by beating. Oops, there goes the entire music industry.

Women driving, leaving their homes without their husbands’ permission, wearing anything other than head to toe covering black abayas or voicing opposition to the rights of their husbands to discipline them with beatings are subject to imprisonment or worse. Oops, there go all of those who believe that human rights extend even to the half of the population that isn’t male.

But these, you say, are just the extremists? Let all the liberals so supportive of the faces of Islam that masquerade as a religion of peace beware. Extremism is just part of the continuum of a culture that worships death rather than life and is antithetical to all the values of freedom, tolerance, abhorrence of violence and racism that allowed America to become what till now defined its greatness. We are a nation that has seen fulfilled the biblical blessing given by God to Abraham that “I will bless those who bless you and those who curse you I will curse, and there will be blessed through you all the nations of the world.”

The Hollywood that has turned the terrorists of Hamas into heroes need to know that by turning against the only true democracy in the Middle East they are due for, as their scriptwriters would put it, a shocking and suicidal surprise ending.

A Tribute to Margaret Thatcher